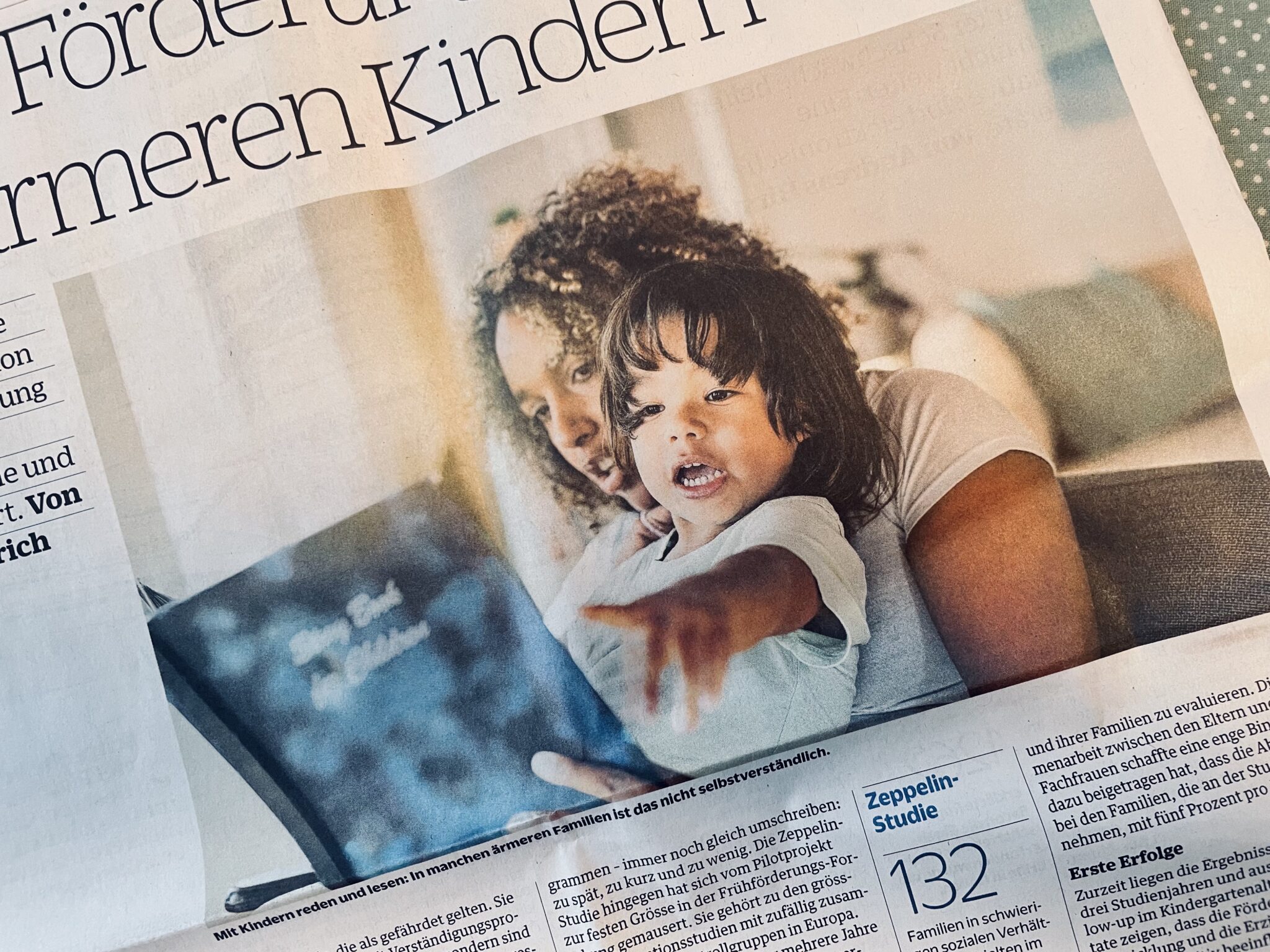 A Swiss study shows that children’s prospects regarding future school and professional chances improve vastly when they receive support at a very early age.

Tired, Marla sat with her newborn baby and two-year-old daughter in a small apartment near Zurich. She was overwhelmed by her crying baby and whining daughter. The young woman missed her homeland, friends, family and their support. Marla hardly spoke or played with her children. Marla, whose name we have changed, thought they weren’t responding to her anyway.

There were no books in the apartment. Isolated from the outside world, with little money or knowledge of German, the small family did not go to the playground or neighborhood advice center for mothers and fathers. Emails, letters and calls also went unanswered. There was no money for anything that cost money – not even enough to get into the local indoor pool. The young mother only showed her face in public if she was accompanied by her husband. He worked shifts and slept during the day.

Deficits in daily school life
Living conditions such as the ones described above are a big problem, especially for small children. They already lag behind their peers in kindergarten because they lack language skills. Later in school, they have an even harder time making up for any deficits. It could really help the children and their families and also alleviate social problems if the children received support early on, if possible immediately after birth.

Since 2011, the objective of the ZEPPELIN Study (Zurich Equity Prevention Project with Parents Participation and Integration) has been to demonstrate the effectiveness of early intervention – in the form of home visits to families with children aged 0 to 3. Marla and her family took part in the study. A social worker visited them twice a week. She showed Marla how to play, talk, and encourage her children. Together they looked at a picture book, painted, and did various crafts. The mother and social worker immersed themselves in role-playing games with the children and took them to the playground and library. Marla was finally able to open up and discuss the challenges she faced at home. The social worker introduced Marla to new ways to look after her children.

“When the father’s name is left blank, when it’s a single mother who doesn’t speak German and who lives on the busiest main drag in town – all these are indicators that the family could be socially disadvantaged”.

Marla and her family are representative of the estimated 10 percent of at-risk families in Switzerland. Not only do these families struggle with communication problems and social isolation, but they are often faced with unemployment, addiction, depression, domestic violence and financial difficulties. They frequently lack linguistic, cognitive and social stimulation. For that reason, children growing up in situations like this lag behind in their development. An American study (“The Early Catastrophe”) showed that by age 3, children from privileged families have heard 30 million more words than children from underprivileged families. This deficit had a devastating effect on active language use: The children from impoverished families used an average of 525 words by age 3, while children from wealthier homes used 1,116 words.

Help came too late
“Every day at work I saw that when the education system reached out to children from disadvantaged families, it did so much too late – and if at all, not until kindergarten,” says child-and-adolescent psychologist, Andrea Lanfranchi. Born in Grisons, Lanfranchi spent many years working as a school psychologist in Zurich. The type of outreach offered to at-risk families was very limited. When support arrived, it often came too late, didn’t last long enough, and wasn’t sufficiently involved. The children spent their entire school career suffering from the linguistic and social deficits that had initially surfaced during their first few years of school. Equal opportunities never existed. Lanfranchi left his job as a public employee and launched the ZEPPELIN pilot study at the Intercantonal College for Curative Education (HfH) in 2011 in Zurich.

ZEPPELIN Study
As part of the ZEPPELIN Study (Zurich Equity Prevention Project with Parents Participation and Integration), social workers trained to advise mothers visited 132 socially disadvantaged families at home. This was based on Parents as Teachers (PAT), a tried and tested program from the US. The visits were limited to three years (2011-2014) with an average frequency of two weekly visits and one monthly group meeting. The focus was not only on providing the children with support, but also on strengthening the families’ parenting skills. This group was compared to a control group of small children from 116 socially stressed families not participating in a support program. The ZEPPELIN Study will continue to accompany and guide these families until 2024 – with guaranteed funding until 2033.

Today, ten years later, despite political initiatives and new programs, Switzerland’s early intervention program can only be described as: too late, too short and too little. The ZEPPELIN Study, on the other hand, has blossomed from a pilot project into a permanent fixture in early intervention research. It is one of the largest intervention studies with randomly selected control groups in Europe. The team accompanies the children over several years. The program was funded by various foundations and the Swiss National Science Foundation. The research project cannot be compared to any other study – be it the Mannheim Study of Children at Risk or the German “Pro-Child Study.” These two surveys only recruited families that spoke German. “The vast majority of at-risk families only speak very limited German,” says Lanfranchi. “Excluding these families from a study saves a lot of time and money, but by no means reflects reality.” The ZEPPELIN team put time into it, reaching the parents and their newborn children over the course of many weeks.

Today, ten years later, despite political initiatives and new programs, Switzerland’s early intervention program can only be described as: too late, too short and too little.

Lanfranchi, who is now in charge of the ZEPPELIN Study as project manager and who heads the Institute for Professionalization and System Development at the HfH, selected six Zurich municipalities for the study. Working closely with the local advice center for mothers and fathers took priority, because when a child is born, these offices are sent a card informing them about the birth. The card includes the baby’s birth date and name, as well as the parents’ name and age, home address, nationality, and comments from specialists.“When the father’s name is left blank, when it’s a single mother who doesn’t speak German and who lives on the busiest main drag in town – all these are indicators that the family could be socially disadvantaged” says Lanfranchi. The research team also made it a point to contact pediatricians, midwives and intercultural mediators or associations in these districts. They hired twelve professionals to find such families that are barely visible in society, visit them at home and win them over for participation in the study.

The home visits ended after three years. The only thing the study team does now is to evaluate, every two to three years, the children’s progress at school and the social development of both, the kids and their families. The female specialists collaborated closely with the parents, forging a tight bond that helped reduce the number of families dropping out of the program to a low 5 percent per year.

First successes
The results from the study’s first three years are currently available as are the initial follow-ups that took place when the children were in kindergarten. The results show that giving children support has a positive influence on child development and parenting skills. The children have better language and math skills than the children from the control group. This is clearly evident by how much help the kids need in German class. In the first year of kindergarten, 11 percent of the children were less in need of extra support. They were also less anxious, had better control over their emotions, had fewer behavioral problems, and slept better. The parents for their part were more sensitive and attentive to their child than those in the control group. They were also better integrated, had a larger social network, and the mothers attended a German course more often.

If this type of support works, it is ultimately a lot less expensive than having child and adult protection services intervene at a later point or involving foster care or family therapy.

The children from the ZEPPELIN Study are currently in 3rd grade. The scientific proof that early intervention has a long-lasting impact will be apparent when the children transition to work life or start going to university. If the adolescents who received help when they were babies do better than those in the control group, then early intervention will finally receive its “stamp of scientific approval.”

The canton of Ticino and the city of St. Gallen have already reacted to the ZEPPELIN results; they adopted the study’s support program and integrated it into the framework of their family and youth welfare services. Pilot projects are being set up in the canton of Zug, in Basel City and in Grisons. In 2015, two researchers from the study embarked on a project separate from the study but based on the same concept of care: They founded an advice center called “Zeppelin-Familien startklar” (ZEPPELIN families are good to go) in Zurich. The costs amount to approximately CHF 8,000 per year per family and are borne by the municipality and canton. If this type of support works, it is ultimately a lot less expensive than having child and adult protection services intervene at a later point or involving foster care or family therapy.