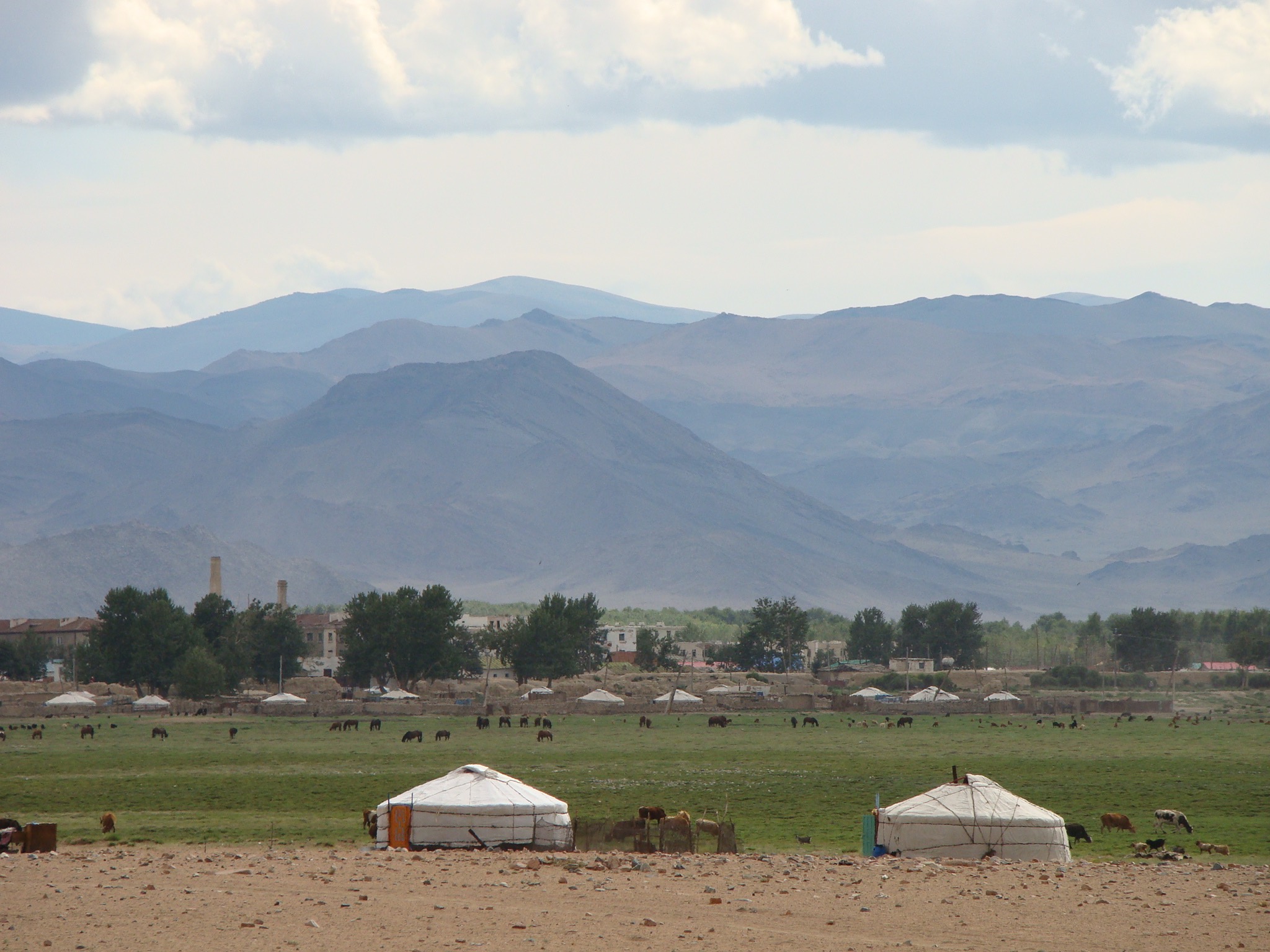 The desert covers about 40 percent of Mongolia and grows even larger every year. The herdsman families are fighting for their existence. The harsh winter makes everything so much worse. A closer look on-site.[1]

The only thing Mongolian nomads have in abundance is time and space. Everything else is lacking – be it lush pastures or enough hay in the winter for the animals or job opportunities and future prospects for the people. With their yurts (Mongolian ger) and herd, the herdsman families move from one pasture to the next. They don’t come across anyone else for days. With an area of 1.56 million square kilometers (more than 18 times the size of Austria) and only 2.7 million inhabitants, Mongolia is the most sparsely populated country in the world.[2] It is a nation dominated by endless expanses, unpeopled plains, and snow-covered mountains on the horizon.

But even without the dzud, the harsh winters are disastrous for the nomads. Many of the malnourished goats, sheep and cows don’t survive the cold.

What sounds idyllic is, however, a relentless struggle for survival. “In the summer, we already can’t find enough food for our herds,” says Orgil. “The pastures lack grass. In its place, a poisonous weed spreads that kills the animals. In addition, the locust outbreaks make things worse.” He and his family are among the 170,000 families in the country who earn their living as herdsmen and anxiously await the winter every year. 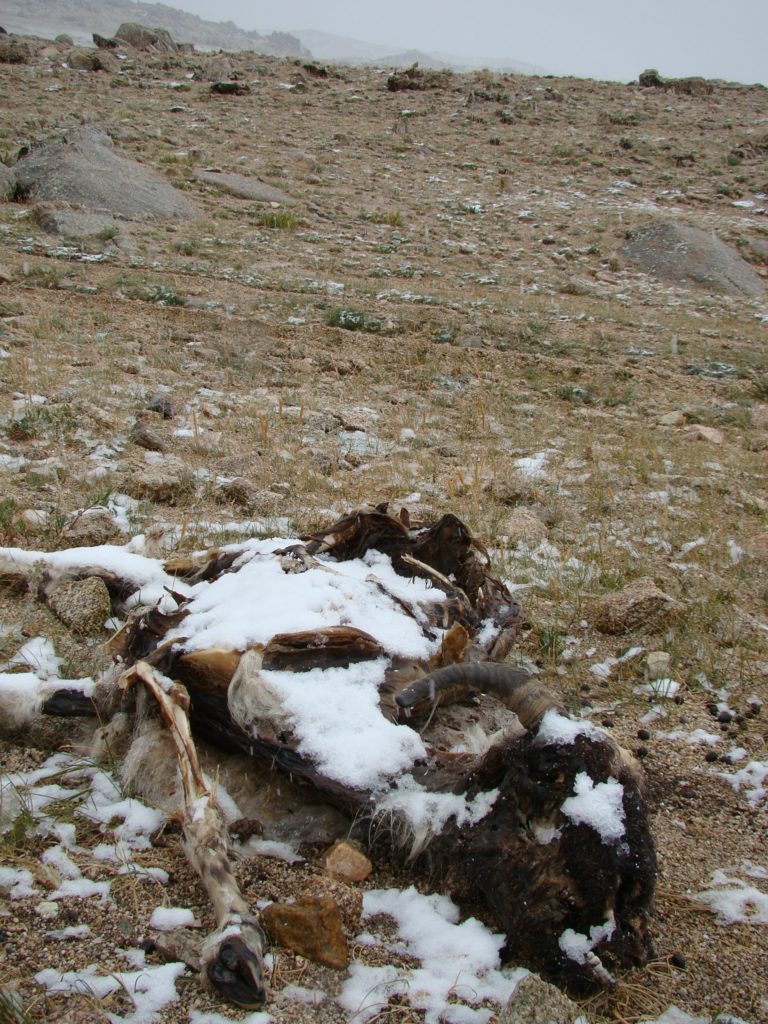 Dzud is what the locals call the combination of dry summers and very harsh winters. Between 1999 and 2002, this phenomenon killed more than a quarter of all animals. Thousands of herdsman families lost their livelihoods. But even without the dzud, the harsh winters are disastrous for the nomads. Many of the malnourished goats, sheep and cows don’t survive the cold. Last winter, about 80 percent of Orgil’s newborn sheep and goats died. The female animals were too weak to carry unborn infants and feed them. This year the same disaster is impending.[3]
Many herdsmen think their situation is the result of climate change. Experts, however, assess the situation differently. “Desertification, i.e., the spread of the desert, isn’t just due to climate change,” opines Karl Schuler, an expert in natural resource management, who works for the Swiss Agency for Development and Cooperation (SDC) in Mongolia. “The shepherds themselves are largely responsible for the condition of the pasture land.” In his opinion, overgrazing arises as a result of a number of complex reasons. 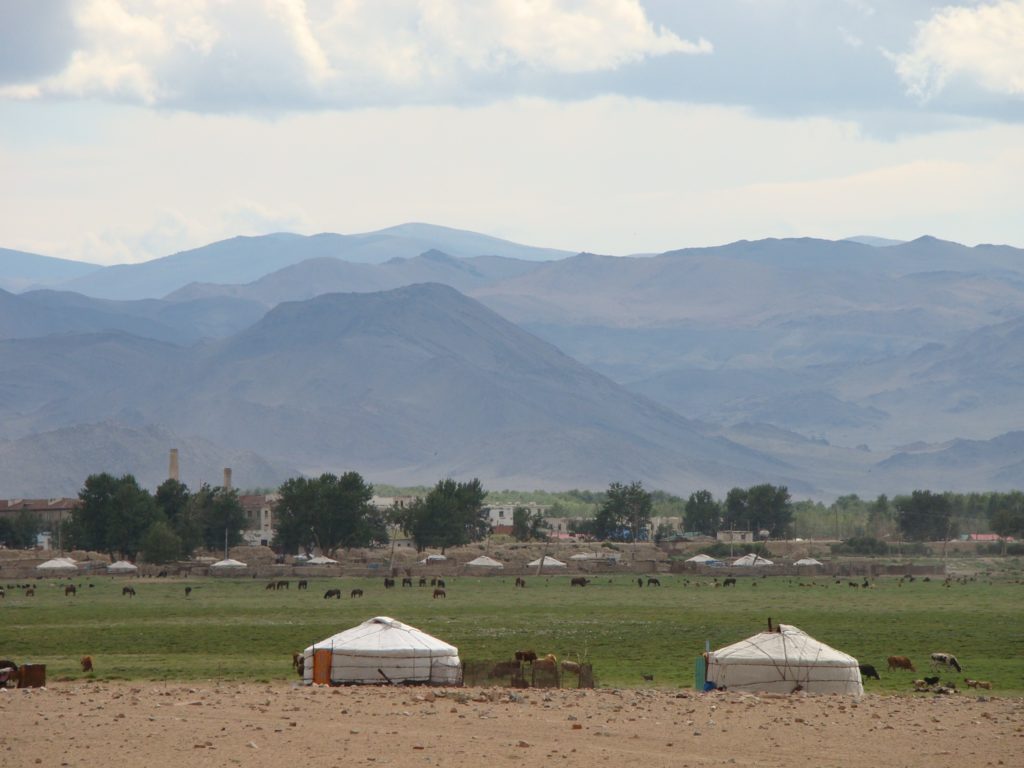 Under the Soviet system, the animals were nationalized and their number was controlled nationwide. There were 25 million grazing animals in Mongolia. Since the collapse of socialism and the privatization of herds, there are no more restrictions. The number of animals has doubled. The pastureland has not caught up with this onslaught; the pastures lack grass and are eroding. The depleted soil can hardly absorb water any more. The surface has washed away. Bushes and trees, which stop the wind and rain, have disappeared due to deforestation. Heavy rains are a threat. At the end of July, floods killed more than twenty people in Mongolia; hundreds became homeless.

The rural population dug up the pipes from the irrigation systems and sold them to China as scrap metal. Pastureland was declared public property, so anyone can let their animals graze at any time.

In addition, the shepherds’ situation is exacerbated by a lack of pasture management. The Soviet experts left the country and with them so did knowledge about harvesting hay, storing feed, running irrigation systems and abiding by pasture regulations. The rural population dug up the pipes from the irrigation systems and sold them to China as scrap metal. Pastureland was declared public property, so anyone can let their animals graze at any time. For that reason, there’s a lack of stockpiled pastures. Overgrazing and mismanagement aren’t the only consequences. The local meat market is oversaturated. There’s hardly an export market; Mongolian meat does not meet international standards of quality. Cashmere goat products, including the precious wool, also can’t compete with the world’s top products. The UN fears that if the land use rules aren’t changed, then about 70 percent of the country will be covered with desert by 2050. For the herdsman families, this would be a death sentence. 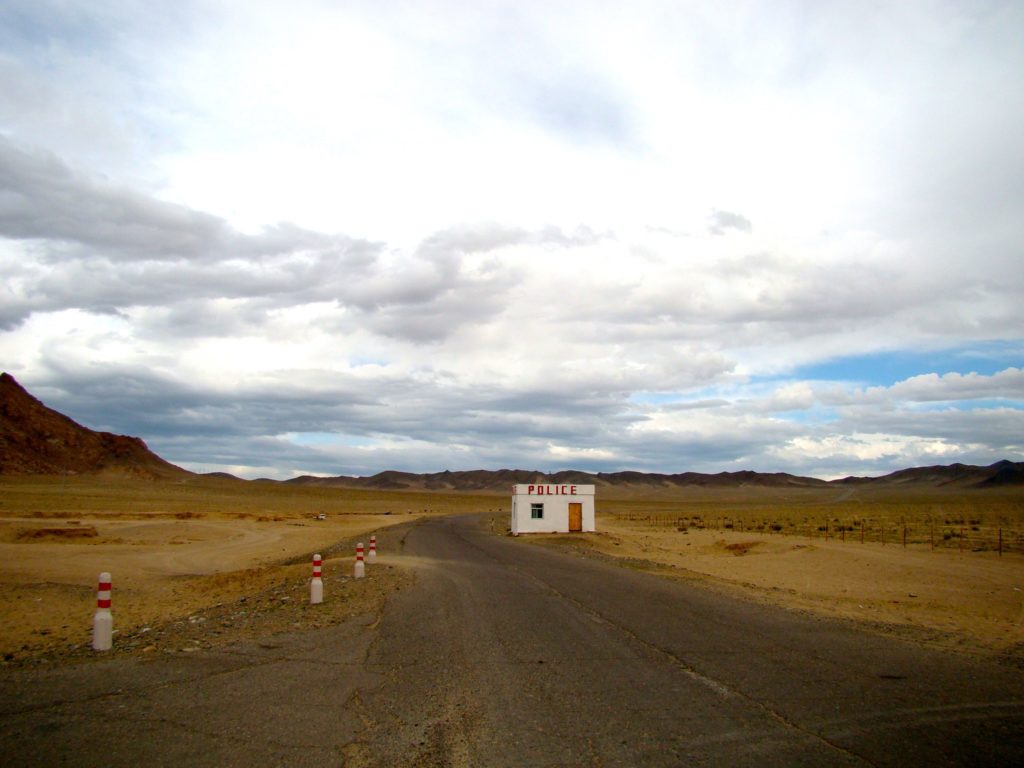 Escape to the city: Pasture management programs are supposed to offer a way out of the vicious circle of overgrazing and desertification. The Swiss “Green Gold” Project has played a pioneering role in this. The shepherds join forces in “pasture user groups” in order to sustainably use pastures together. This includes maintaining water resources and cultivating and developing alternative sources of income – be it greenhouses for planting vegetables or sewing machines for sewing fabrics. As a result, the condition of the pastures and the size of the animal population should slowly change to regain a balance that is healthy for nature.

But for many herdsman families, this type of help is coming too late. They have given up their rural lives and have moved to the capital with their yurts.

But for many herdsman families, this type of help is coming too late. They have given up their rural lives and have moved to the capital with their yurts. About half of the 2.7 million Mongols live in Ulaanbaatar. According to estimates, a new family arrives every hour with a ger dwelling to find happiness there. Among them is 45-year-old Tsagaan. With her husband and two teenage sons, she relocated from the country to the edge of the capital in 2007. There is no running water and no sewer system. The rural exodus brings massive ecological as well as social problems to the city. Since their arrival two years ago, Tsagaan and her family still haven’t found a job.

“With the socialist system, a job was at least guaranteed. Now we are free, but what’s life without a job?” Tsagaan is not the only Mongolian asking herself this question. An estimated 30 percent of employable people are unemployed. Roughly 36 percent of the population lives below the poverty line. According to studies conducted by the World Bank, this figure exceeds 43 percent in rural areas.[4] There’s a big discrepancy between the population’s poverty and the richness of Mongolia’s natural resources. The country has copper, gold, iron ore, uranium and coal.

The capital is flooded with job seekers, who are usually poorly trained workers from rural areas. Inversely, the new service-oriented society is looking for qualified personnel. Tsagaan’s family tries to earn its livelihood as garbage collectors or day laborers. But the economic crisis has caught up with them even here. The prices for collected scrap metal, PET bottles, paper, animal bones and glass have plummeted by 30 percent since the start of the year. A total of 90% of construction projects in the capital have come to a standstill. Banks no longer give loans and many investors have pulled out. 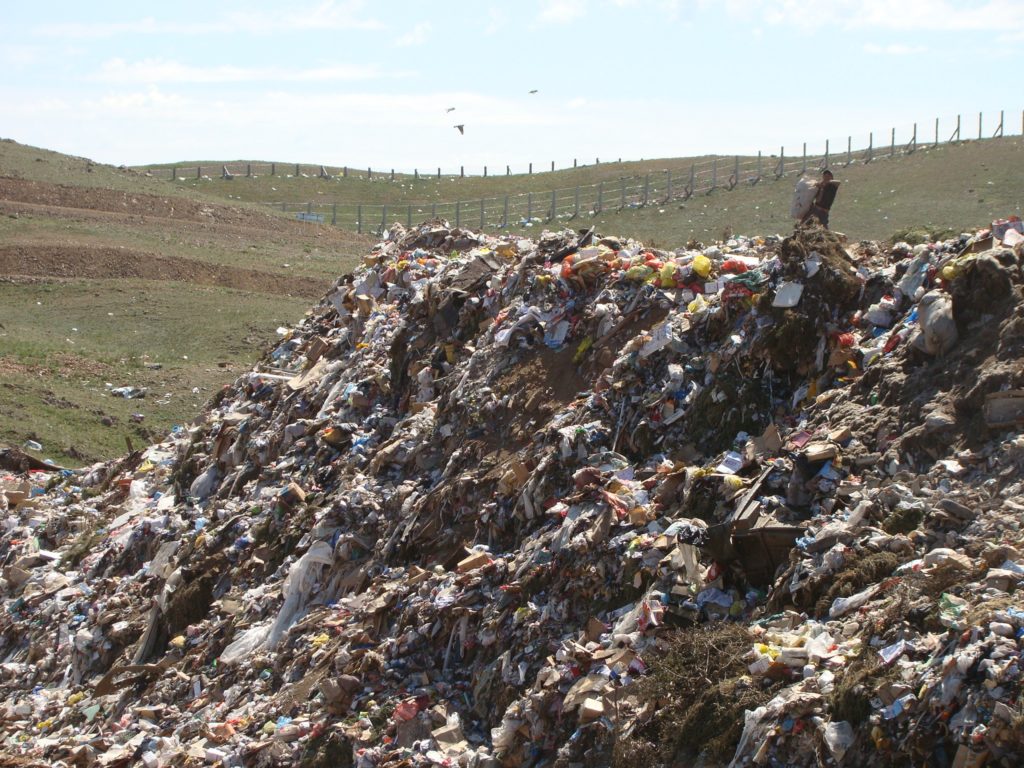 A garbage collector in action in Ulaanbaatar, Mongolia. (Photo: Wüthrich)

Despite the economic misery and widespread corruption, Tsagaan hopes for a better future. Last May saw the election of a new president with Democrat Tsakhiagiin Elbegdorj.[5] The election campaign was marked by promises. Politicians stated that every Mongol should benefit from the proceeds from natural resources. “Instead of promising the people money, the government should give them jobs,” criticizes Sanjaasuren Oyun, the former Mongolian foreign minister and opposition politician. She adds: “Promising people a single payment doesn’t improve their situation; a regular, secure wage does. We need to create a politically, economically and socially healthy system that promotes sustainable development.” Speaking emphatically, the parliamentarian asserts a centrist political position.

[1] In 2009, the author visited Mongolia and spoke with politicians, nomads and pasture management experts.

[2] In 2009, Mongolia was estimated to have over 3 million inhabitants.

[3] Orgil’s fear of another hard winter was justified. 2009/10 was a dzud winter with extreme snow and cold.

[4] The figures have improved in the past years. In 2014, a total of 21.6 percent of people still lived below the poverty line.

[5] President Tsakhiagiin Elbegdorj survived his first term in office without any major scandals. He advocated against corruption and in favor of democratization measures to ensure that the money from natural resources was more widely distributed. In 2013, Tsakhiagiin Elbegdorj was reelected to office.

Published in 2009 in Südwind Magazin.

One hell of a ride