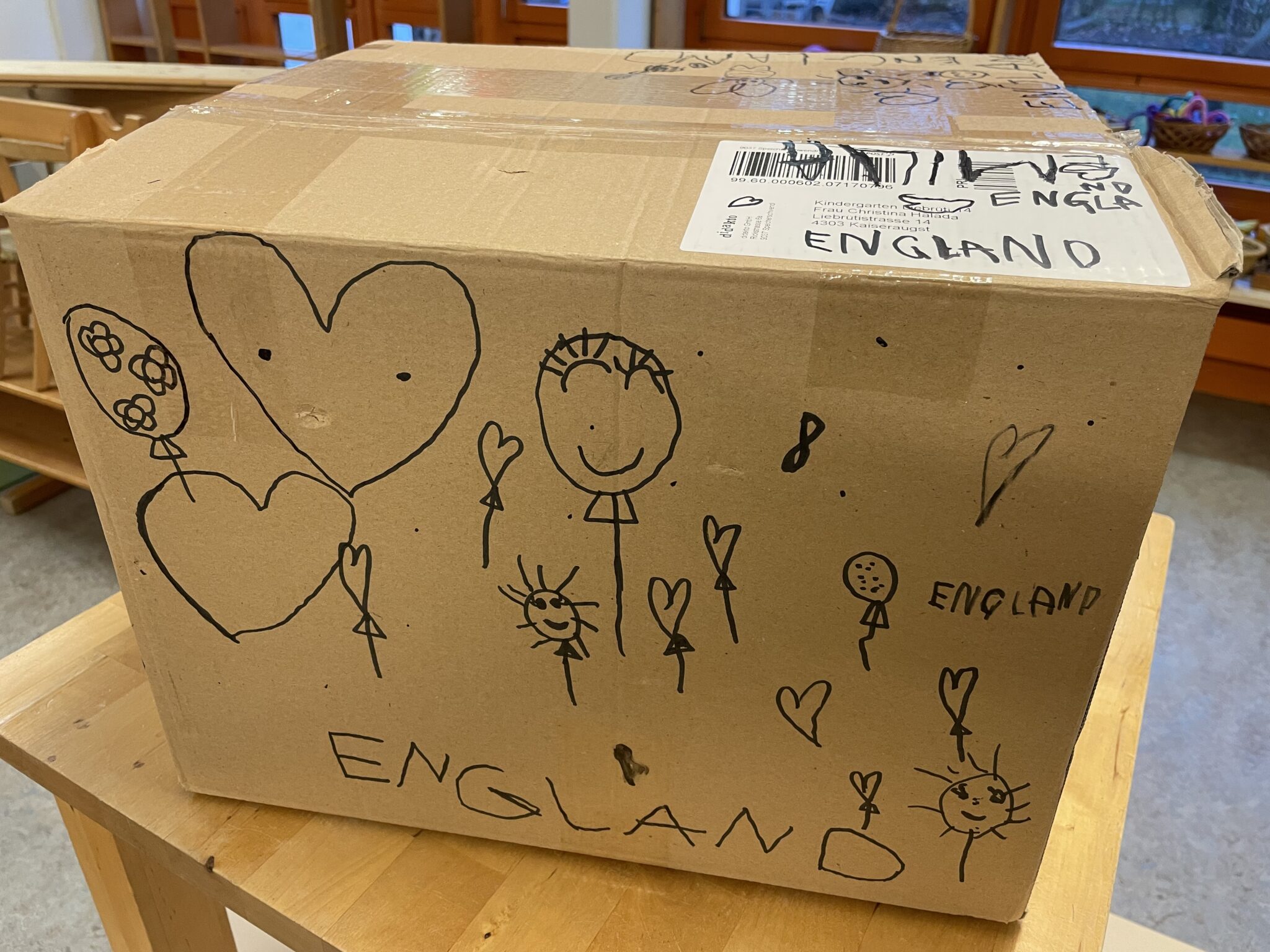 Little children spend three months at a kindergarten without toys: Is this a crazy pedagogical idea or a project that effectively prevents addiction?

The two dolls from the playroom took off to the Black Forest this year for almost 12 weeks. They are warmly dressed in case it snows. The entire toy farm set went on vacation in the US, while the building blocks are all taking a break in England. Carefully stored in boxes, chests and suitcases, they are primed for their long, well-deserved holiday – as are the kids for their stay at the “toy-free kindergarten,” which is what educators call it. The project takes place over a three-month period during which there will be no toys in the kindergarten, or rather, the toys have been sent on vacation.

While, the old wooden cow is lying on a beach in the US and the yellow building block is marveling at London’s Big Ben, the kids have a lot of time and space to play. The only question is: with what?

“On the first day of toy-free kindergarten, the children themselves decide where to send the toys,” says Christina Halada. The kindergarten teacher in the Swiss town of Kaiseraugst has been running the “toy-free kindergarten” project for 20 years, this year for the 10th time. The children democratically vote on where to send the toys. Then they form packing and moving teams, which neatly store the boxes on shelves or deposit them in a room adjacent to the kindergarten room. For the toys, the journey ends there. But for the children, this is where the adventure begins. While, in the children’s imagination, the old wooden cow is lying on a beach in the US and the yellow building block is marveling at London’s Big Ben, the kids have a lot of time and space to play. The only question is: with what?

“The children can use the furniture that’s in the kindergarten room to play with: tables, chairs, shelves, as well as cushions, boxes, towels and ropes,” says Halada. With its plants and trees, stones and sand, the garden is also a play spot. The five and six-year-olds decide for themselves what, where, when, for how long and with whom they want to play. They also decide when to have their morning snack and when to take breaks.

The only thing set in stone is the golden rule: “I take care of myself, the other children and the material in such a way that nobody is harmed by me or my playing.” Everything else is freedom and fantasy. The tables become imaginary bear caves or tree houses. The chairs become express trains or giant snakes. The entire kindergarten is converted into a zoo, a doctor’s office, a supermarket or a movie house. As the kids’ kindergarten teacher, Halada is always there in the background.

Give boredom some space to run
Since the toys and usual kindergarten structure are absent, the children are forced to rethink things and so are the teachers. “As specialists, we are used to giving constant input, such as leading and designing lessons or laying out and monitoring learning paths – all of this is gone,” comments educator Halada as she describes her experience to other interested teachers during scheduled courses. Rather than engaging in standard pedagogical activism, educators are now called upon to attentively hold off, allow the kids to act on their own and observe.

There is, for example, the girl who wanders around the room all morning looking for something to do – for an idea or a game. In her everyday kindergarten life, she spent most of her time curled up in the drawing corner and did not have to deal with anything new or unusual. The drawing corner is now gone and so are the pens and paper. The six-year-old has lost her comfort zone and needs to reorient herself. In the end, she builds a house out of ropes – and is immensely proud of her work. “Giving children space to explore, to experience boredom, to let them find their own solution, no matter how long it takes – that’s challenging teachers to seriously rethink things,” says Halada. If everything goes well, both sides benefit. The children become more independent and many become bolder. Halada above all sees tremendous progress in language development: Children can’t play together or solve conflicts without communication.

As a kindergarten teacher, Halada has come to realize that she often intervenes too early and too often, that not meddling and letting things run their course is actually a valid, positive response. One example of this would be the blue chair that is used in disputes and disagreements. For example, if Anna hits other kids or if Paul isn’t allowed to play with anyone or if it’s too loud for Ms. Halada, then the person affected sits down on the blue chair and calls a helpers’ conference. The problem is described. The community is obliged to listen and look for solutions together. “I moderate the first few conferences,” reports the teacher. “Later, the children do this themselves and solve their problems independently.”

Tie the troublemaker to the chair
In one conflict, the children quickly and unanimously decided to tie the troublemaker to a chair. When kids are allowed to decide for themselves and “no borders” are set on their playing, what are the limits? “One of the main rules is: Stop means stop,” says Halada. “In addition, as teacher, I’m always present and weighing whether a situation endangers a child.” The boy ended up being tied to the chair but soon rejoined the others and played peacefully with them.

If one looks at kindergartens in general in Switzerland, toy-free kindergartens don’t pop up much. Developed and implemented in Southern Germany in 1992 as an addiction-prevention project, various Swiss kindergartens adopted the project’s idea almost ten years later. In 2001, a regional addiction-prevention organization called “Suchtprävention Aargau” integrated the toy-free kindergarten into its program. The organization offers work material, a photo book, training courses for interested professionals and coaching on how to implement the method.

Other cantons such as Lucerne, Zurich or Solothurn include the toy-free kindergarten in their addiction-prevention programs and help with the implementation process. “We get inquiries from other cantons, but also from abroad – from Germany, Brazil and Turkey,” says Susanne Wasserfallen, an employee at “Suchtprävention Aargau” and, since 2017, head of the “Toy-Free Kindergarten” project. Due to corona virus restrictions, courses are now also offered online. This, for example, is how 150 educators from Turkey took the course.

Learning outside one’s comfort zone
But what does a five-year-old kid who turns an old cardboard box into a rocket and hunts extraterrestrials in a toyless kindergarten have to do with addiction prevention? “The project aims to strengthen life skills,” says Susanne Wasserfallen. “That means finding strategies to solve problems, learning to communicate with others, being critical, taking responsibility, but also knowing where to go for help.”

For many children, not having access to their usual toys makes them step outside of their comfort zone. What do I play with now and how do I find a new idea for a game? Whom do I want to play with and how can I successfully communicate that? “Facing such challenges without outside help and finally mastering them on your own gives a child self-confidence and inner strength,” says Wasserfallen. People who can take uncertainty, frustration, and boredom and turn it into something positive develop resilience. “This may also make a crucial difference later in life,” says Wasserfallen. “Teenagers who are familiar with strategies for solving conflicts and who actively tackle problems have less reason to become violent and are less likely to resort to alcohol or drugs.”

Is it all hot air or even child abuse?
Nevertheless, scientific evidence is lacking on the actual effects of a toy-free kindergarten. No studies have been conducted on the subject. In March 2016, the “Weltwoche,” a weekly Swiss magazine, ran an article on the subject and referred to it as “hot air” and as “an anti-capitalist approach.” “Focus,” a German news magazine, described the toy-free kindergarten as a new health fad, “a kind of vaccination against drug, cigarette and alcohol addiction,” though in actuality it was only this: “a form of child abuse.”

For Susanne Wasserfallen and Christina Halada, it is clear that there will always be critical voices and that some parents and experts will see toy-free kindergartens as stupid and pointless. “Experience has shown that parents are less likely to be critical or prejudiced against the idea if we give them detailed information early on,” say the two experts. Information evenings are held before and during the “toy-free kindergarten” project. In addition, parents are invited to attend visitation days in order to form their own opinions. According to Wasserfallen and Halada, visiting eliminates the parents’ concerns and doubts in most cases. Many parents notice a change in their children, that, as a result of the project, their children have learned to express their own opinions and are now doing so at home. The children also often start to do without toys within their own four walls, preferring to use the living room sofa as a dragon cave or the dining table as a surfboard. The toy-free kindergarten not only challenges children and teachers, but parents too.

When vacation lasts longer
In a December 2021 interview with the “Süddeutsche Zeitung,” a German newspaper, the German pedagogue and educational scientist Volker Mehringer advocated against turning toys into some type of drama or problem. He recommends that adults take the child’s perspective, that they think about their own childhood, and that they permit their kids to participate in the full range of available play options. After all, everything is just stuff to play with, whether it’s industrially made or created by your own imagination. After spring break, the kindergarten children in Kaiseraugst will bring their toys back from “vacation.” Depending on which kindergarten class it is, the children’s building blocks, dolls and cows will get a few extra days or even weeks of vacation in England, the US or the Black Forest.