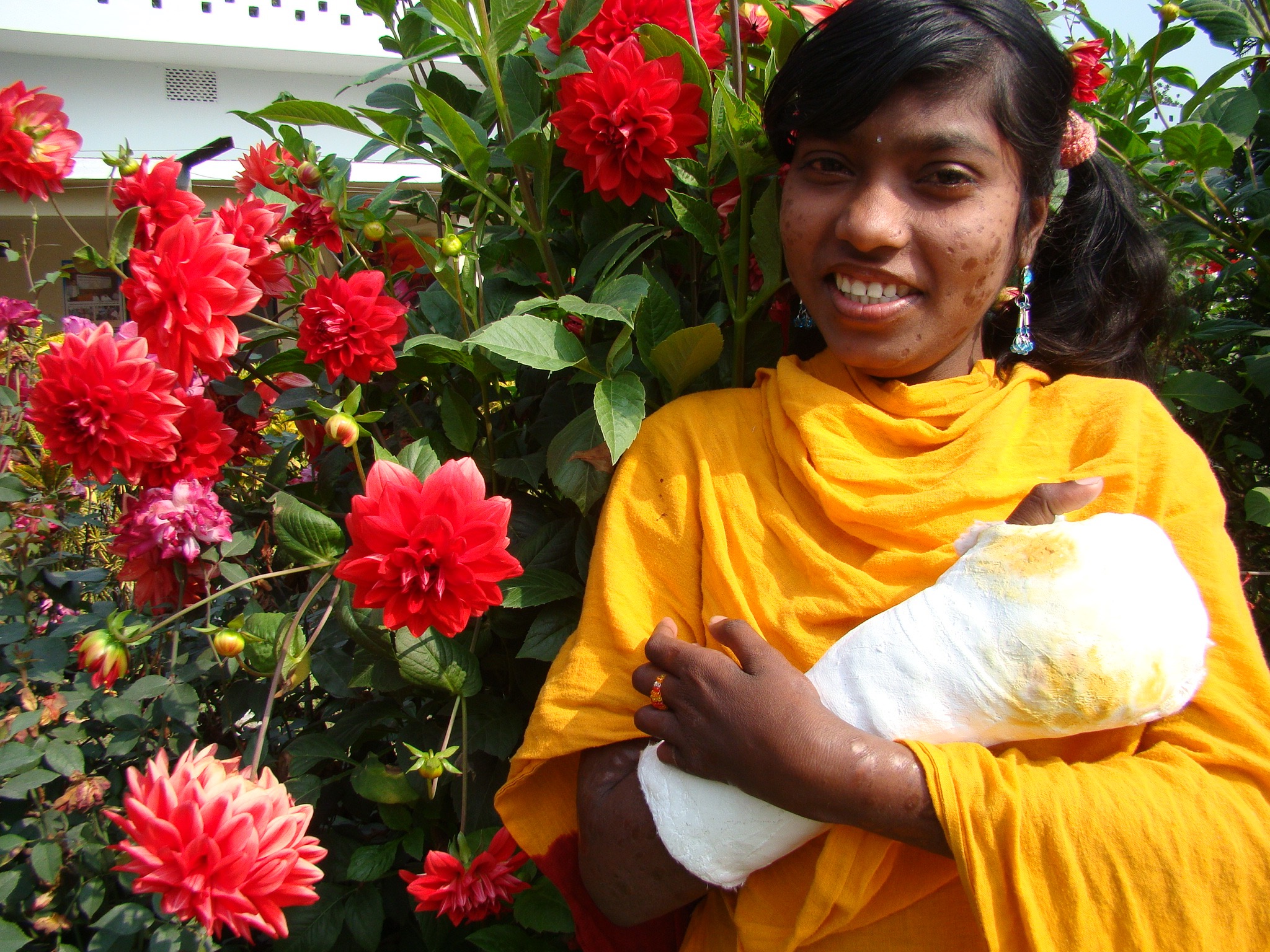 Mina gently caresses the short brown hair of her 5-year-old son, Minavul. She proudly smiles – just like millions of mothers around the world do. But the 30-year-old is in a completely different situation. When she touches her son’s fine hair or his warm skin, she can’t feel them. Mina’s hands are numb, her fingers disfigured.

Mina was born in a small village in northern Bangladesh. There’s no electricity. Cars and visitors are rare. The people live in mud huts and work in the fields for a daily wage of barely one euro. Mina works in these fields with the others. She’s never attended school. At 15, she contracted leprosy. But there is no medical help – knowledge about the disease is too limited. The village is too remote and the family is too poor. The leprosy germs are destroying Mina’s nerves – first she loses her sense of touch in her fingertips, then in her hands, toes and feet. “I didn’t notice the open wounds,” she recalls. “I didn’t feel anything. The people in the village excluded me. They refused to let me use the water pump.” It was just before her 18th birthday that Mina finally got medical help. The antibiotic therapy stopped the disease, which was already in a very advanced stage. Her toes and fingers can no longer be saved. They are deformed or missing altogether. Mina remains in her village and begs. As a leper, she is regarded as unmarriable, thus becoming “fair game.” She was raped several times.

In 2005, her son Minavul was born. “He gives me something to live for,” she says. “He should go to school and learn a profession.” That’s an idea that’s not easy to realize. For many poor families, sending kids to school means a reduction in income. According to UNICEF, there are about eight million child laborers in Bangladesh who work to provide financial support to their families. They help out because almost 40 percent of the people in this country live below the poverty line, earning less than a dollar a day. This figure includes most of the estimated 25,000 lepers who are disabled by their illness. “But it is worth fighting for,” says Mina. She’s the one who would know. 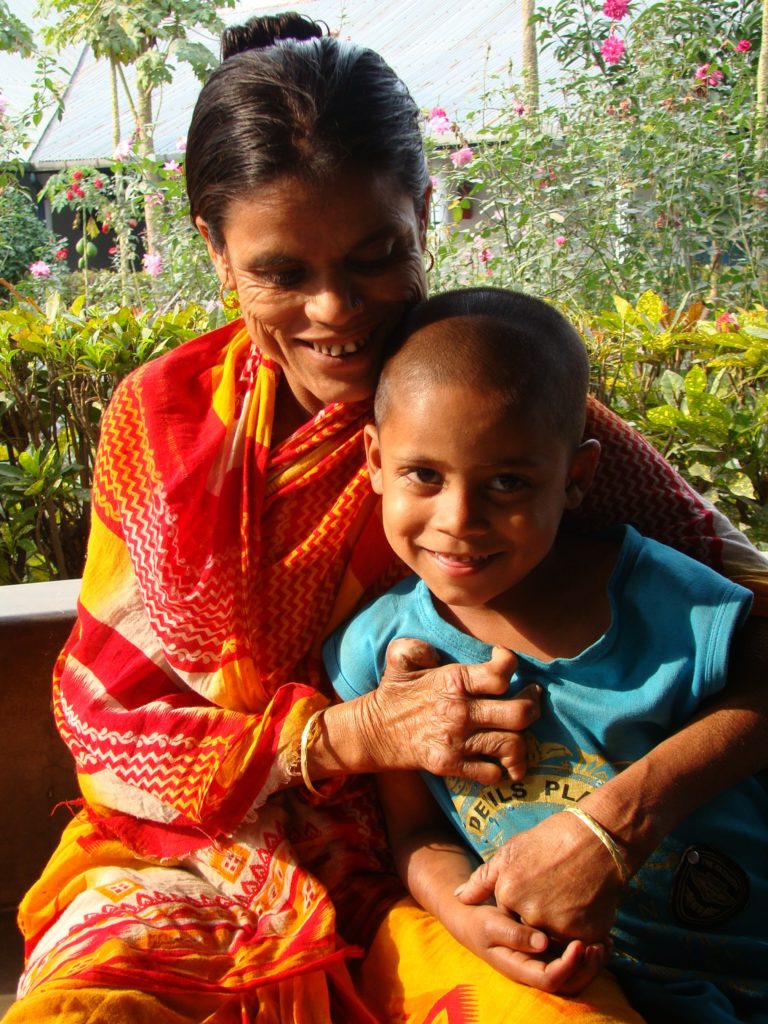 Mina with her son Minavul. (Photo: Wüthrich)
Lotifa’s story is similar to Mina’s.  She comes down with leprosy at age 12. She too is cast out. “But Leprosy Mission’s staff found me and gave me antibiotics,” says the 28-year-old. “I was put in a training program for seamstresses. After I graduated, I opened my own seamstress shop.” Filled with colored fabrics, the tin hut stands at the edge of the marketplace. There is no electricity. She runs a foot-powered sewing machine.

Lotifa still hid her story. She told her future husband that the numbness in the three fingers on her left hand was due to an accident, not to leprosy. The fear of being rejected as a leper was too great.

At first, people had their reservations about having a leper do their seamstress work. “But in the end what counts is quality and price,” says Lotifa, emphatically. She adds: “Many people know that there is no risk of infection if a leper is undergoing treatment. If you are treated with antibiotics at an early stage of the disease, you can even be completely cured.” Lotifa still hid her story. She told her future husband that the numbness in the three fingers on her left hand was due to an accident, not to leprosy. The fear of being rejected as a leper was too great. Today, Lotifa is the mother of three healthy children. Her husband knows her story and stands firmly behind her. “I cannot imagine a life without my wife,” he says. “Leprosy no longer matters to us.” 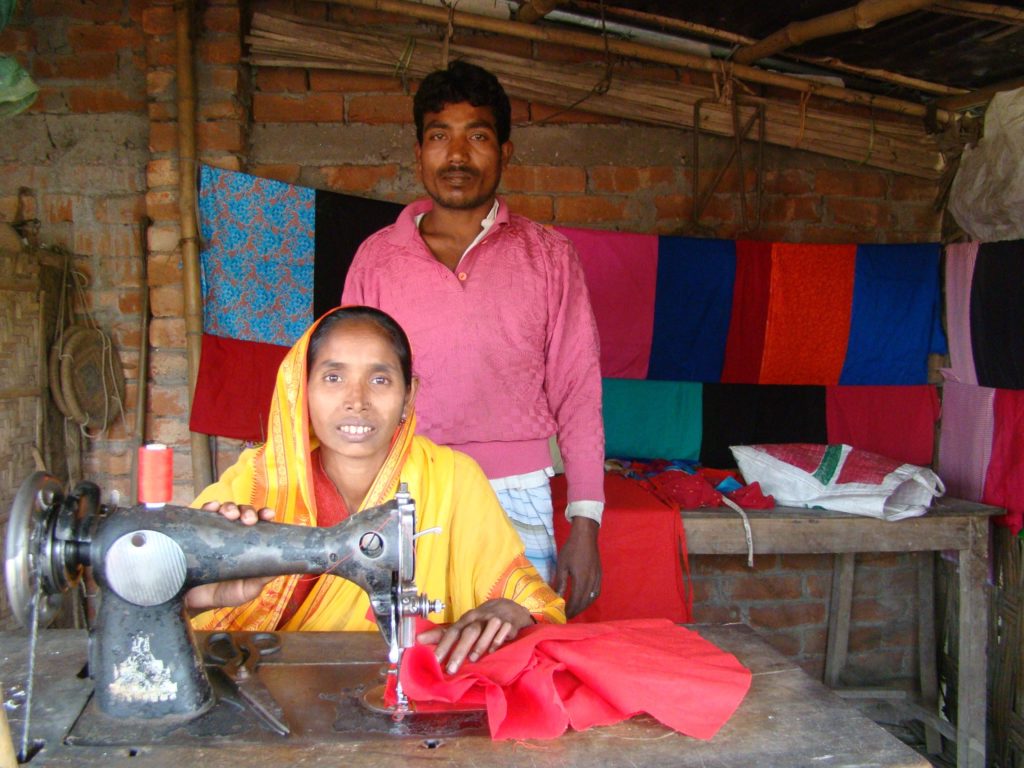 Lotifa with her husband in her atelier. (Photo: Wüthrich)
Leprosy is transmitted via infected droplets. If lepers are treated consistently with antibiotics in the disease’s early stages, the disease can be cured. If the infection remains untreated, the leprosy germs will destroy nerves in the hands and feet. The ability to feel pain is lost. Wounds and infections go unnoticed and can lead to a loss of limbs. Leprosy is described as a “poor person’s” disease. Poor hygiene, contaminated drinking water and inadequate nutrition can cause infection.
It will still take some time before leprosy no longer matters to everyday life in Bangladesh. But the signs are good. The past thirty years have seen a decrease in leprosy cases from 13 lepers per 10,000 people to less than one case per 10,000 people. This decline was achieved thanks to an informational campaign and prevention policies implemented by local organizations and the Leprosy Mission International (TLMI), which pays for antibiotics and surgical procedures for lepers. “Treatment would otherwise be unaffordable,” says Jean-François Negrini, explaining the situation. The Swiss surgeon works in a leprosy hospital in northern Bangladesh. The hospital treats patients with wounds on their hands and feet, but also treats severe cases where infections have led to cancer and amputations.

“Certain disabilities caused by leprosy can be treated surgically. For example, by inserting new endogenous tendons we can reactivate the closing movement of the hand or eyelid.”

“Certain disabilities caused by leprosy can be treated surgically. For example, by inserting new endogenous tendons we can reactivate the closing movement of the hand or eyelid.” One of surgeon Negrini’s patients is 18-year-old Nargis. Her face and body are covered with dark spots – pigment changes and scars, traces of leprosy. “I was lucky,” says Nargis. “Apart from the dark spots and limited movement in my left hand, I’m fine. The medication has worked.” Her left hand is in a cast. She will leave the hospital in a few weeks. The newly transferred tendons not only return part of the movement to her hand, but also give her the courage to dream. “I would like to become a teacher – and show that leprosy does not disable you.” 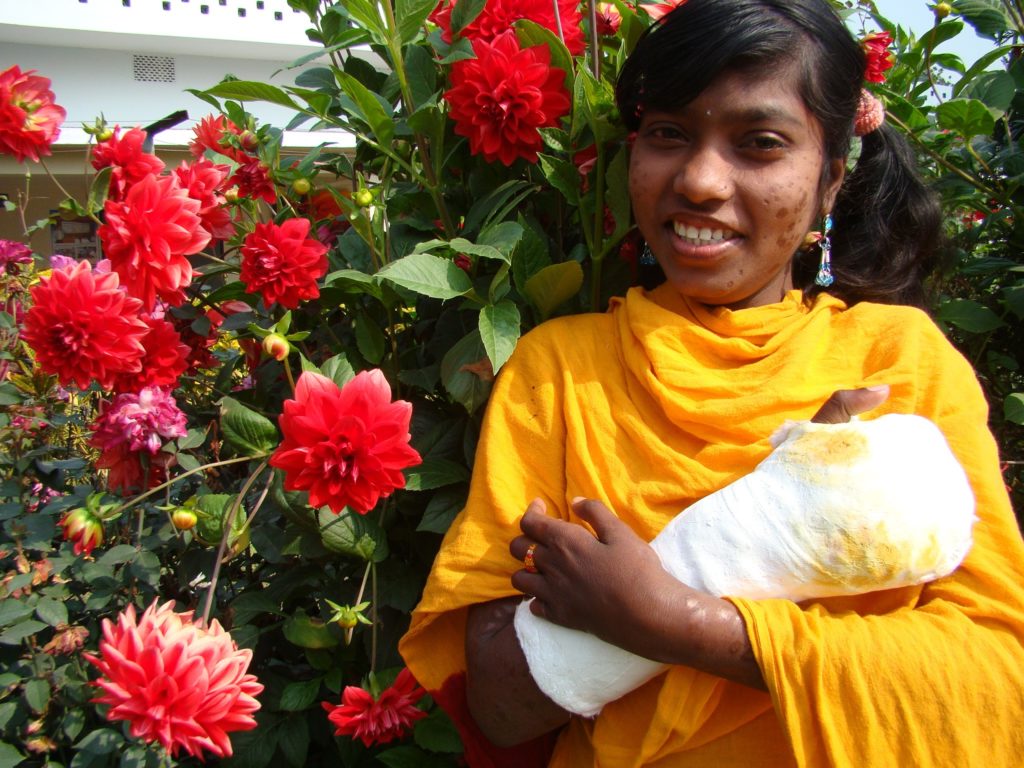 Nargis, who would like to become a teacher, just before leaving the hospital. (Photo: Wüthrich)
Published in June 2010 in the magazine, Jolie.