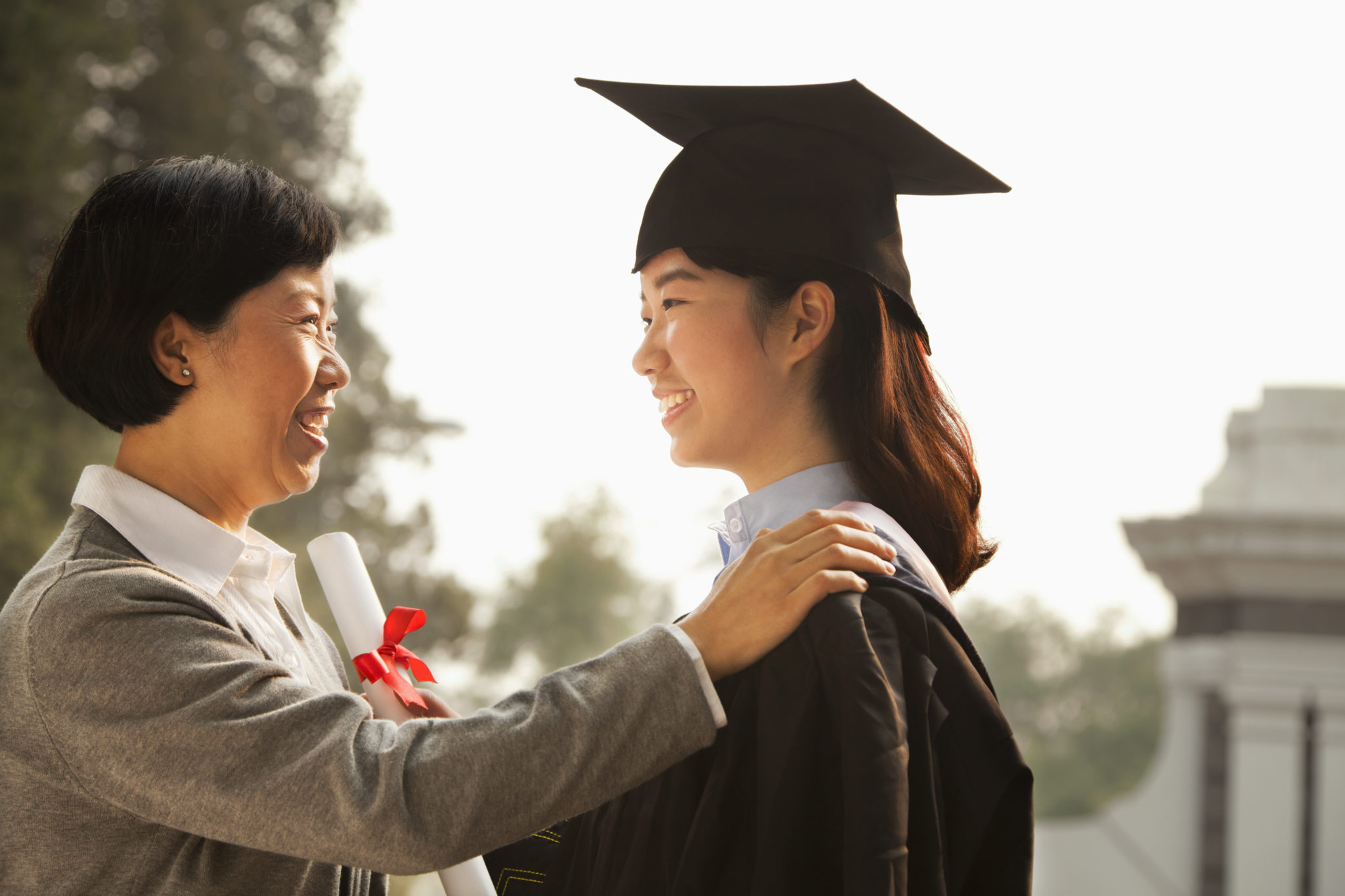 Singapore’s widely admired education system is designed to to churn out university graduates. Because it lacks trained workers, the government has now effected a structural change. It now also emphasizes craftsmanship – like Switzerland.

Singapore has much of what makes up a successful national economy: industry, trade, tourism, top schools and universities. Only a university degree is the way to prestige, career and good compensation. There are plenty of university graduates but a scarcity of trained craftsmen. Now the state has decided to change that and invest in training.

“This economy doesn’t need academics alone, but workers and skilled tradespeople too,” says Tom Ludescher, CEO of Helvetia Asia and Chairman of the Swiss Business Association in Singapore, analyzing the situation. “Moreover, we often lack such people.” Low-wage laborers are recruited from Bangladesh, China, the Philippines and India. “But it’s hard to find skilled tradespeople with the appropriate background on the national labor market,” adds Ludescher. “If they can, international companies try to recruit foreign skilled tradespeople or try to train their own new recruits.” In Singapore, there are vocational colleges, technical colleges and specialized institutions, where the focus is on training people to become skilled workers. But a vocational college does not equal seasoned skill. Singapore places hardly any value on manual labor. College grads enjoy a good reputation, but skilled tradespeople do not. In local parlance, “ITE,” the acronym for Institute of Technical Education, stands for “It’s the end.”

“We don’t compete against a system, but against the other children. If Jeremy gets 90 percent of the questions right, but his classmates get 95 percent right, then he views his performance as average at most. That’s not enough to get you anywhere.” Not anywhere means not the university.

“Hardly anyone becomes a tradesperson.” Hwee Lee comes from Singapore, has Chinese roots and is the mother of 13-year-old Jeremy. “We don’t compete against a system, but against the other children,” says Lee Hwee, explaining the situation. “If Jeremy gets 90 percent of the questions right on an important school exam, but his classmates get 95 percent right, then he views his performance as average at most. That’s not enough to get you anywhere.” Not anywhere means not the university.  To prevent this from happening, Jeremy’s parents and most parents in Singapore invest a lot of time and even more money. More than 90 percent of all primary school pupils in Singapore receive tutoring daily. The nation spends 760 million US Dollar annually on tutoring and supplementary instruction. If that still doesn’t get you into a university in Singapore, then you go abroad. Six out of ten young people between ages 25 and 29 have graduated from a university in Singapore. According to the World Bank, this means that Singapore has the highest percentage of academics. In Switzerland, barely 20 percent of students in a class pass the Swiss Matura (school-graduation exam). 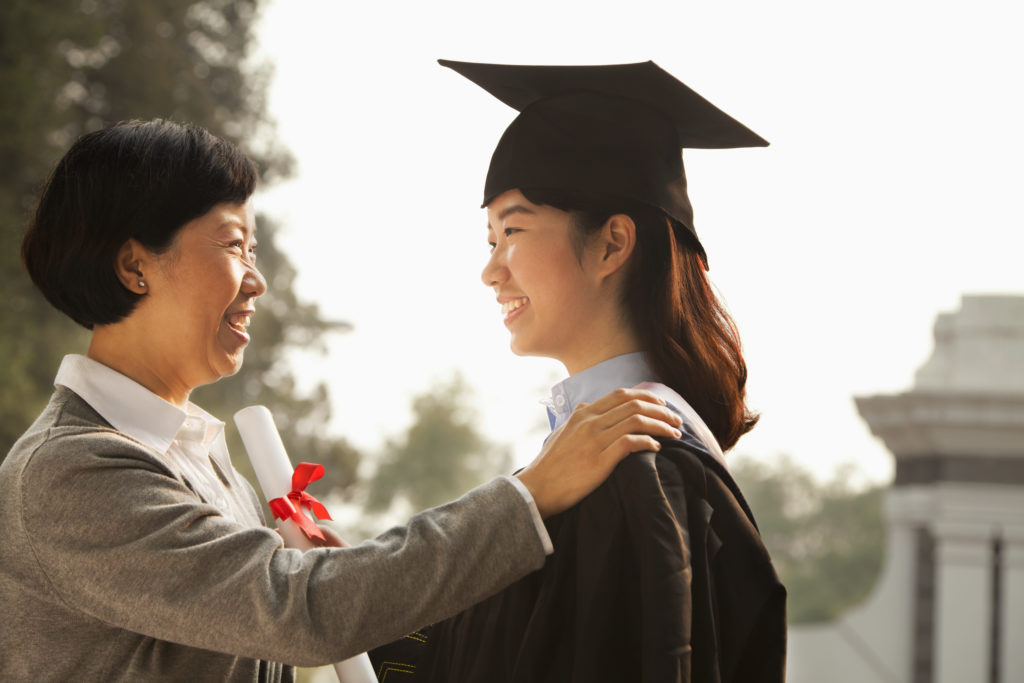 A university degree brings success and pride to the entire family: a mother and daughter at graduation.

According to the PISA study, Singapore’s school system is one of the best in the world. However, you hardly hear that the education system is based on pressure and drills paired with rote memorization. School, homework and supplemental tutoring: In Singapore, a school day often runs from 6:30 a.m. when the students are picked up by the school bus until 10 p.m. at night when all the homework is finally done. Jeremy’s mother, Hwee Lee, invests 1,000 US Dollars monthly in private tutoring. “You can’t not take part in this rat race,” she explains. Because getting a job in Singapore – with an official unemployment rate of 1.8 percent (August 2015) – is not a problem. But prestige, a career and a good income only come from completing a university education. An electrical engineer who just graduated from the university earns a wage of roughly USD 2250. At work, his colleague, who graduated from a technical school, earns USD 1,000 less per month.

“If a child gets sick, the parents fear only one thing: That the child’s academic performance will fall behind that of his or her classmates. Make my child healthy. Parents make it clear that that’s what they want – no matter how and it better be quick.”

“The fear of failure is omnipresent,” says Sharin Shee, a family doctor in Singapore. “If a child gets sick, the parents fear only one thing: That the child’s academic performance will fall behind that of his or her classmates. Make my child healthy. Parents make it clear that that’s what they want – no matter how and it better be quick,” says Dr. Sharon, describing her experiences. It’s hard to make parents understand that too much pressure is counterproductive. “Before the major exams at the end of a child’s elementary school education, many parents take unpaid vacation time, so they can help their child 24/7,” says the doctor. “With so much effort, failure is not an option.”

Prime Minister Lee Hsien Loong is also aware that the pressure to perform at school can become a problem. “Let your children have a childhood,” the prime minister once said in an appeal to the nation he already made in 2011. “Not having any homework is not a bad thing.” It looks like hardly anyone heard him. But Lee wants to restructure the education landscape in his country. The university should not be the only worthwhile goal. A practice-oriented dual vocational training system based on the German and Swiss model should offer young people an alternative to the university and provide more skilled workers and fewer academics. Equipped with better qualifications, locals can start doing the jobs otherwise done by skilled tradespeople recruited from abroad. That means less immigration and more Singapurity.

A rosy future – even without a university degree?
The government now has its first Minister for Higher Education and Skills Training. Launched in April, the government initiative “SkillsFuture” is thus increasingly important and offers work-study programs, so-called “Earn & Learn Programs.” It gives young tradespeople the opportunity to gain 12 to 18 months of practical experience at a company. The trainees receive a signing bonus of USD 3,450, a monthly salary of USD1,400 and a diploma. The state offers companies support in the form of funding amounting to USD 10,350 per trainee.

“Switzerland and Singapore are in close contact about the dual-track education system and possible projects. The ball is in Singapore’s court. The Swiss firms on site are ready to play.”

Vocational training pays off, which is also what the pilot project “Poly goes UAS” is supposed to demonstrate. Poly stands for the Polytechnic schools, which are Singapore’s industry-oriented high schools. UAS stands for University of Applied Sciences, referring to the dual-track vocational universities in Germany. This project is backed by six German companies with offices in Singapore and also by Singapore’s Economic Development Board (EDB). “We want to offer Singapore’s technical college students an alternative route, which combines practical training at German companies with theoretical training at German vocational colleges,” says Ping Bu Loke emphatically, the center director of EDB.

There is tremendous interest in this education program. Last year, several hundred students applied for eight spots. “There is already a local version of the program, supported by German companies. Students alternate between theoretical semesters at the Singapore Institute of Technology (SIT) and practical semesters at companies.” Swiss companies are not involved. “Switzerland and Singapore are in close contact about the dual-track education system and possible projects,” says Swiss Ambassador to Singapore Thomas Kupfer, emphatically. “The ball is in Singapore’s court. The Swiss firms on site are ready to play.”

The intention of Singapore’s government is clear: The “university obsessed” population should get excited about vocational training. If need be, they’ll be lured with financial perks and with help from the media. Prime Minister Lee does not tire of honoring successful tradespeople in a way that captivates the public’s attention and of underscoring the fact that: “These people don’t have a university degree. But if you work hard in Singapore, you can have a rosy future.” Lee himself studied at Cambridge. He sent two of his sons to the Massachusetts Institute of Technology. Whether average Singaporeans, who had their education drilled into them, will believe Lee and his “keep-away-from-the-university strategy” is doubtful. In the minds of the people, anything other than a university degree still seems to them a most serious defeat.

*  Hwee Lee’s and her son Jeremy names have been changed to keep their privacy.

Published in December 2015 in the newspaper, NZZ am Sonntag.