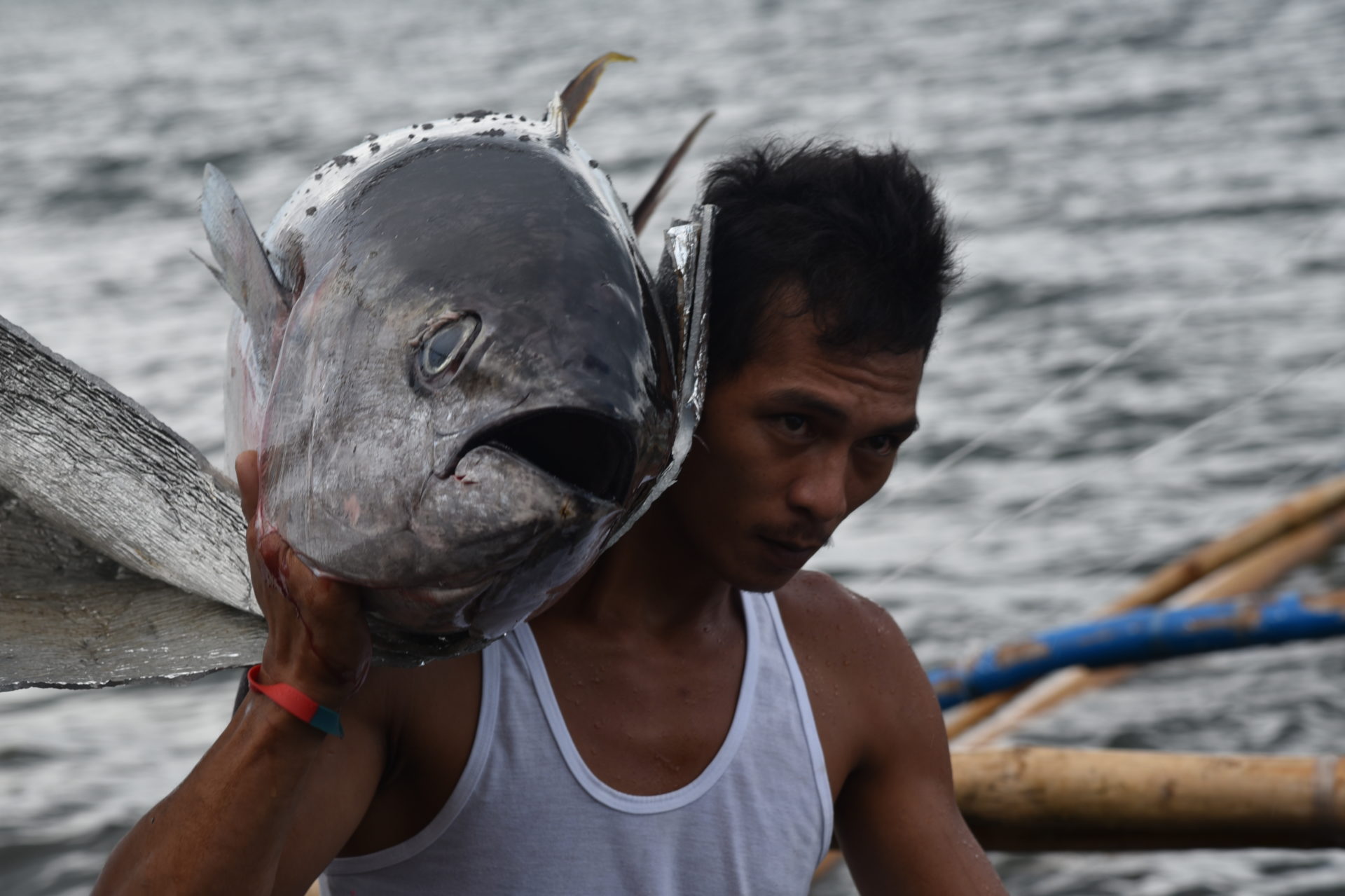 The world’s appetite for tuna only keeps rising – with dramatic consequences for the stocks. Switzerland is involved in a program that supports sustainable yellowfin tuna fishing practices in the Philippines. What does this mean for fishermen and consumers?

Anyone arriving at the small regional airport near Tabacos is glad that at least on the runway there aren’t any palm trees. Located in a tropical wet climate zone on Lagonoy Gulf, the small town is a short hour by plane southeast of the Philippine capital of Manila. Mayon Volcano, an active volcano, reigns over Tabaco. Thanks to the fertile volcanic earth, everything thrives here in huge quantities. However, it’s not just rice, vegetables and fruit that are an integral part of every meal for the local inhabitants, so is fish. Lagonoy Gulf spans an area of 3,700 square kilometers (ten times the size of Lake Geneva) and is as deep as 1,200 meters. The area counts as an important spawn area for yellowfin tuna. But the best tuna is not found on the local fish market in the city center. Class-A yellowfin tuna is exported directly to foreign markets. As for Lagonoy Gulf, they also export to Switzerland!

The best tuna is not found on the local fish market in the city center. Class-A yellowfin tuna is exported directly to foreign markets. As for Lagonoy Gulf, they also export to Switzerland!

Since 2011, the Swiss companies Coop and the meat product producer Bell, in which Coop holds the majority of shares, have been supporting a WWF program in the Philippines, which aims to secure tuna stocks in the long term and to establish environmentally friendly fishing methods. More than 5,000 local fishermen at two locations (Lagonoy Gulf and Mindoro Street) are involved and practice sustainable yellowfin tuna fishing. This means: catching fish traditionally from a simple wooden boat with fishing lines.

Tons of bycatch must die
The fishermen work with four lines, equipped with hooks and baits that are cast as deep as 150 meters. The fish are caught using a circle hook that does not harm other sea animals such as turtles. Each tuna is pulled individually from the water. Fish weighing less than 20 kilos are released, because they might be young fish that haven’t spawned yet. Unlike industrial fishing, there is hardly any bycatch. Industrial fishing, on the other hand, uses long lines with thousands of hooks and giant nets (so-called purse seines) that don’t just catch and kill tuna fish, but also tons of seabirds, sharks and turtles.

The WWF project has a clear objective: to get certified by the Marine Stewardship Council (MSC) by 2017 and receive its seal of approval for sustainable fishing. “The fishing grounds should be protected, the tuna caught sustainably, and the fishermen’s position should also be strengthened,” says WWF Project Manager Joann Binondo, explaining the situation. “The fishermen have registered their boats, are organized into fishing cooperatives, document their catches and can show that they have fishing certificates.” The latter is necessary to export the fish to Europe. The fishermen hope to get better prices for their catch if they fish according to MSC criteria. Binondo emphasizes that the aim of the WWF and its partners is to get the Philippine authorities to rethink the situation. Besides Coop, these partners include companies and corporations in Germany, Holland and Great Britain.

Maximum of four fish per fishing tour
The first signs of success are visible. Prohibited fishing techniques, such as dynamite fishing, are punished with horrendous fines. Industrial fishing in the coastal fishing zone (which extends 15 kilometers into the ocean) is prohibited. Local traditional fishermen are the only ones allowed to fish in this area. In addition, to reduce the bycatch, industrial fishermen are required by law to use smaller mesh nets – while the minimum mesh size has been increased from 2.5 to 7.6 centimeters. “Politics must take into account that fishing in the Philippines has a future only if sustainable methods are practiced,” says Binondo. “Our project is exemplary. But the project alone is not enough. The fishermen, consumers and the authorities need to change the way they think.”

The first signs of success are visible. Prohibited fishing techniques, such as dynamite fishing, are punished with horrendous fines.

Annually, 2,800 tons of yellowfin tuna are caught in accordance with the WWF project; about 47,000 tons are caught in Philippine waters on the whole. Lagonoy’s fishermen are at the forefront. One of them is Arman Buag. Seven days a week, the 38-year-old sails out into the open sea in the early morning hours and hopes for a big catch. Three of them endure twelve hours on a small wooden boat. There isn’t much space. The boat doesn’t have space for more than four big fish – the biggest that Arman ever caught weighed 65 kilos. “In order to cool the fish properly, we need a cool box with ice, which takes up a lot of space,” says Arman. “We are not allowed to use a bigger boat, because we would then be regarded as ‘industrial fishermen’ and would no longer have access to the coastal fishing zone.” Some of Arman’s colleagues have even smaller boats and no cooling facilities. By the time they get back to land, the catch only meets B or C quality standards and ends up on the local market at a lower price. 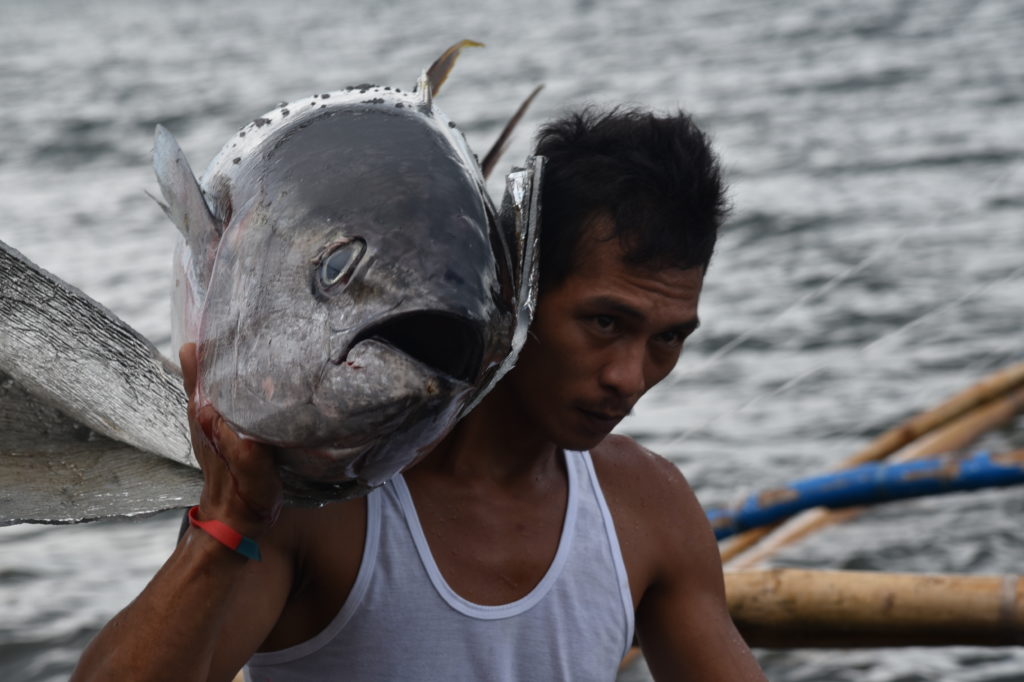 If a tuna fish has bitten the bait, the exporter is notified by SMS. He comes in a refrigerator car to pick up the fish and check the quality. Class-A tuna fish is cooled to 0 to 4 degrees Celsius, transported by truck to Manila in a ten-hour drive, cut for export and sent by cargo aircraft to Switzerland. For an A-quality fish of roughly 40 kilograms, Arman earns 300 to 500 Philippine pesos (between six and ten US Dollars) depending on the market price and after he has deducted boat rental costs, fuel costs and the wages for his two fishermen.

“My children should never become fishermen.”
Arman’s income is just enough to feed his family. He lives in a small hut with a single room, a cooking niche and a type of toilet. 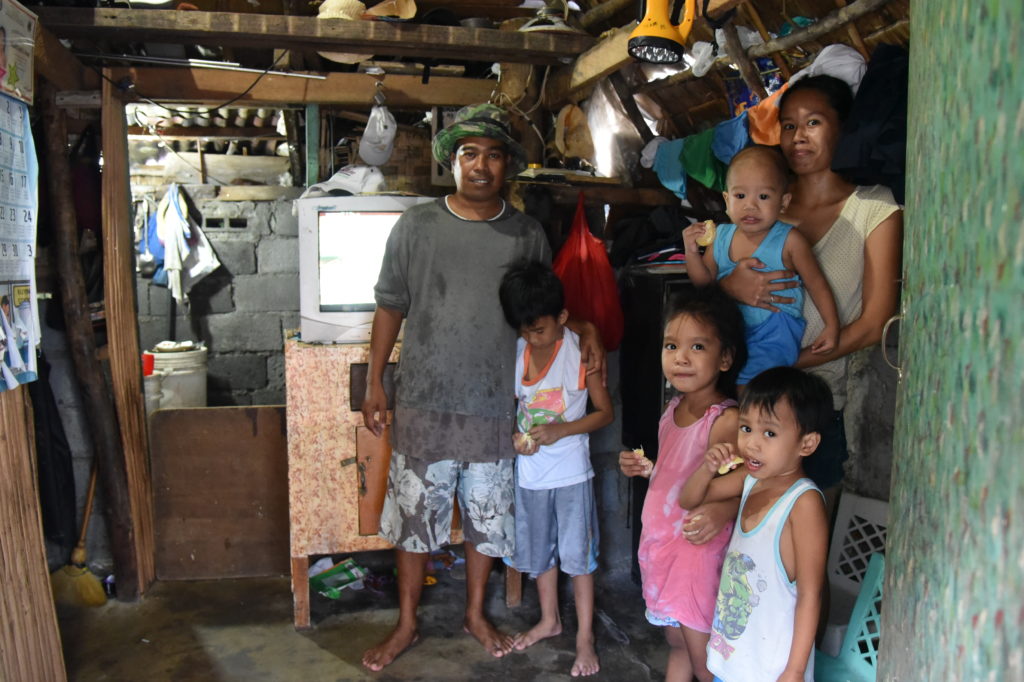 Arman and his family in their hut. (Photo: Wüthrich)

His own four children should never become fishermen, he says. The profession is too risky. The income is too small and the future is too uncertain. “Nowhere else in the world are there storms more devastating than ours. Getting caught in a cyclone on the open seas could be deadly.”

“Industrial tuna fishing should be banned. It harms nature and the fish. A single industrial boat catches as many fish in a day as 28 traditional fishermen.”

Moreover, the fishing season is very limited. Arman works as a painter from April to October. But in spite of this, Arman and his fishing colleagues are grateful to be involved in the WWF project. “If we deliver A-quality fish caught on a hook, we will definitely find a buyer with a fair price,” says Arman. Nevertheless, he demands that another step be taken. “Industrial tuna fishing should be banned. It harms nature and the fish. A single industrial boat catches as many fish in a day as 28 traditional fishermen. With or without the project – what kind of future can we and the fish expect if industrial fishing continues

Loved and hunted. Tuna fish are among the most popular fish for consumption. Whether used in sushi or canned: Demand is growing steadily. According to Greenpeace, over 80 percent of the commercially used fish stocks are exhausted. This is not only due to overfishing but also to bycatch and climate change. Of the eight types of tuna, two are threatened with extinction: the Atlantic bluefin tuna and the southern bluefin tuna. The remaining species, such as yellowfin tuna, have so far been classified as only “almost endangered.” Tuna fish are migrating fish that can travel up to 160 kilometers per day and reach top speeds of up to 75 kilometers per hour. They live in smaller groups and feed on smaller swarm fish. Yellowfin tuna is either consumed as fresh fish or used for canned products. A yellowfin tuna can grow to be 9 years old, 2.4 meters long and weigh 200 kilos. Like a tree, a tuna’s age can be read by taking a cross-section of the fish’s spine and counting the number of rings.

A Yellow Card from the EU. The Philippines are comprised of more than 7,107 islands, of which 880 are populated. Along with Indonesia, Malaysia and Papua New Guinea, they belong to the Coral Triangle where over 3,000 fish species live, twice as many as in every other region of the world. But the area is overfished. Many fishermen are not registered, don’t have a permit and exploit the stocks using prohibited fishing methods. In June 2014, the European Union warned the island country, along with Papua New Guinea, by giving them a Yellow Card. They were put on notice that imports of fishing products into the EU would be banned if they didn’t strengthen their fight against illegal and unregulated fishing. Maria Damanaki, the EU commissioner in charge, wrote: “I urge the Philippines and Papua New Guinea to fight this practice which puts the livelihoods of fishermen at risk. In the end, sustainability of fisheries in the Pacific Ocean means sustainability here in Europe, on our plates.” The EU’s threat led to a reform of the fishing industry. In April 2015, the Yellow Card was revoked.

Published on February 4, 2016 in the magazine, Tierwelt.

“Credit is good, but we need cash.” One of Arman’s friends in his “restaurant.” (Photo Wüthrich)