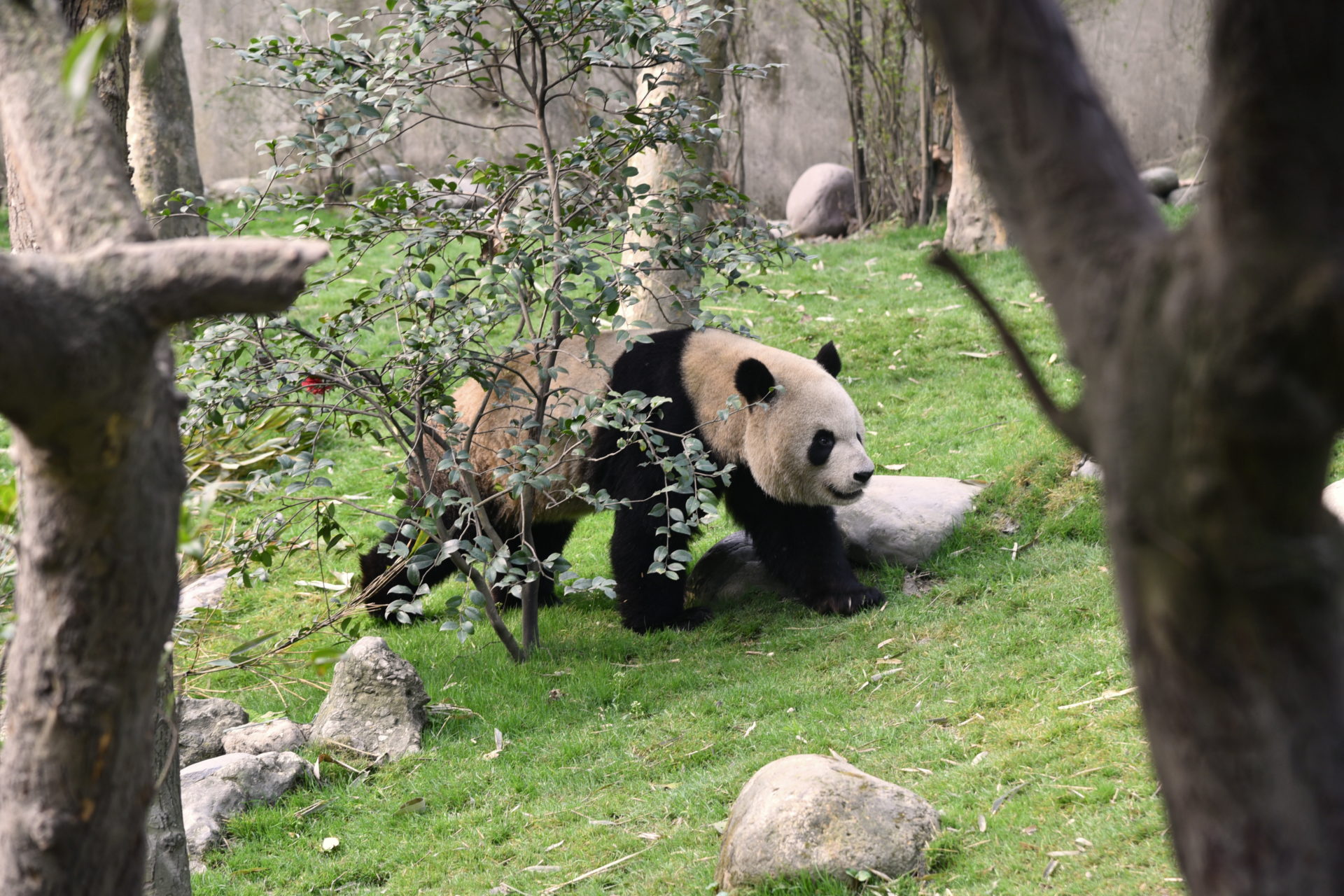 China opened one of the most modern breeding centers for pandas. The focus is not on animal welfare, but on reproduction and loan fees amounting to millions.

Miao Miao totters through her cage looking bored and sluggish as she chews on bamboo. If it’s too hot, then the female panda retreats into a cooled room with grey tiles at the Panda Valley Research Center. Those expecting a nice idyllic space for pandas will be disappointed. Tourists can buy underpants with a panda motif on them for about 2 Swiss francs, a hat for 5, and a panda hug for about 400. 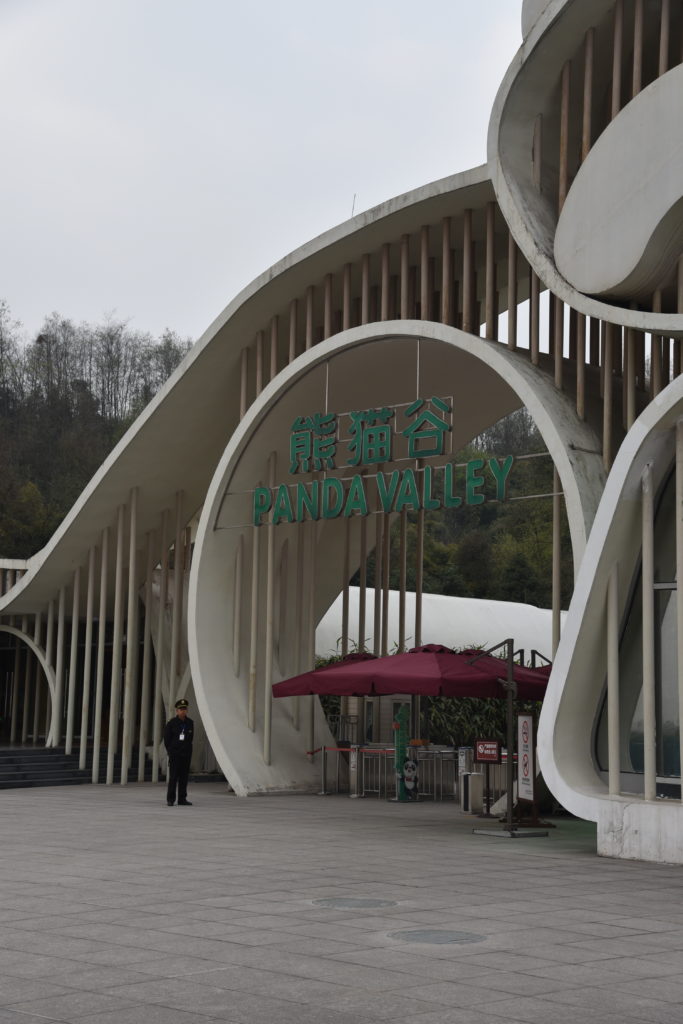 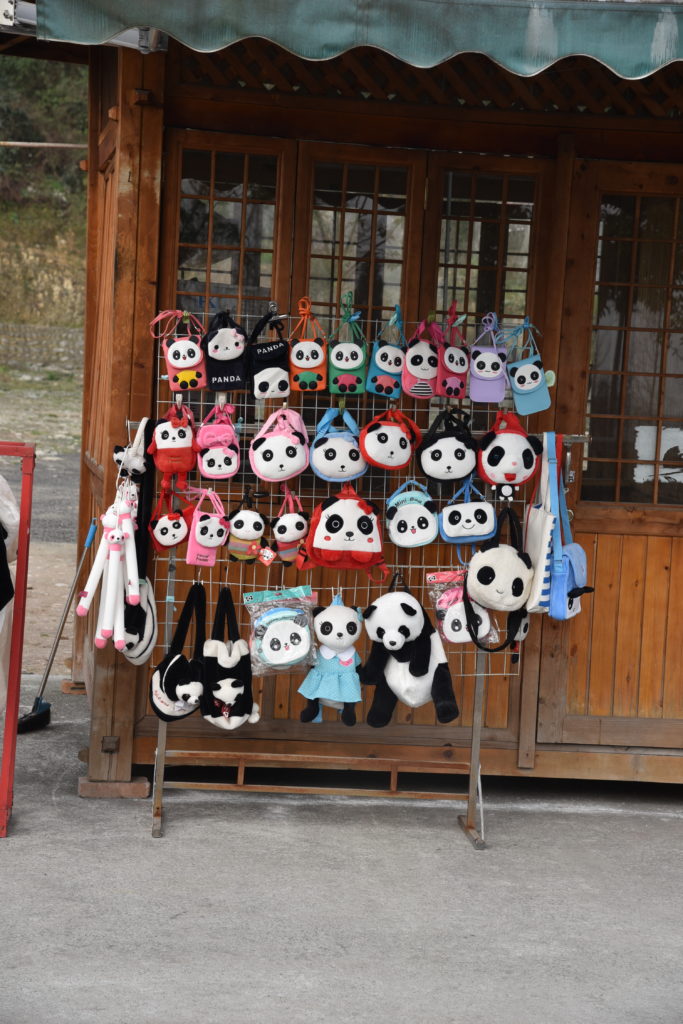 In China, the research center and other panda facilities focus less on the animals’ well-being, but on their reproduction: by artificial means, performed frequently and with the goal of breeding as many as possible. Male pandas aren’t very interested in sex and the females are only fertile once a year for at most 72 hours. There’s no time and space for the animals to engage in the romantic rituals of mating activities. For that reason, the research centers use artificial insemination to produce lots of baby pandas every year. Soon it will be even more, since a new center just opened. Having cost a whopping 240 million US Dollars, it includes a visitor center, care department, research station, breeding infrastructure, and 60 to 80 pandas.

The panda center is located in the Wolong National Nature Reserve – a panda nature reserve covering an area of 2,000 square kilometers (the size of the canton of St. Gallen) and providing a home for 150 wild pandas. The center expects to see a million visitors annually. The visitors will all use the new access road, the only one that passes through the nature reserve. The center is planning another road that will run through the nature reserve to the grass pastures. “Unfortunately, the new center might be big, but it’s not impressive,” says Marc Brody soberly. Brody – a National Geographic employee, the founder of the NGO Panda Mountain and an advisor to the Wolong Nature Reserve – is an American environmental activist committed to protecting pandas in China. “Traffic will cause a rapid increase in waste, noise and pollution, ” says Brody. “Tourists need infrastructure, entertainment and electricity. The wild pandas’ habitat is being reduced and fragmented yet again.” Most of today’s baby pandas will never be confronted with the challenges of living in the wild but will die in captivity after living the life of a breeding machine. Only a minority of these will be placed in a training program when they’re five to six months old, so they can be released into the wild after two-and-a-half years. Their caretakers wear panda outfits so the animals don’t get used to people. The pandas participate in role-playing exercises where they learn to recognize enemies, defend themselves and forage for their own food. 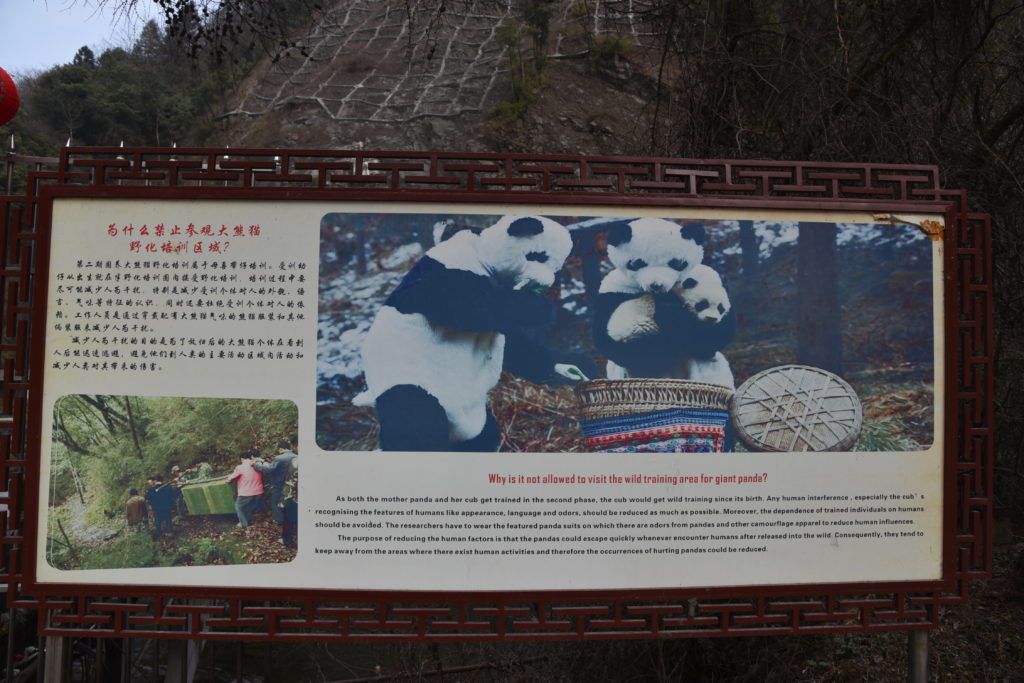 But for now this wilderness reintegration program still lives in the shadows. It lacks recognition and value. Many people believe that the animals lead a better life in captivity. Why release a panda into the wild where it will be wet, freezing and hungry? So far, six pandas have been released into the wild. Four survived. The first male panda, Xiang Xiang, was released in 2006. Running away from other wild pandas, he crawled up a tree and fell to his death. Xiang Xiang barely survived a year in freedom – after three years of intensive preparation.
Brody explains: “The question is not: Can we breed animals in captivity and release them into the wild? It is instead: Can we offer them a home in the wild?” Over the past ten years, the Chinese government has proclaimed 23 new nature reserves, thereby increasing the number of panda habitats to 67. Taking up some 34,000 square kilometers of space, these habitats cover an area the size of Belgium. However, there are protected areas where, to date, not even a single panda has lived. Mining, agriculture and streets disrupt the habitat areas. There is a shortage of green space corridors and a lack of dense bamboo forests. “You can’t just plan protected areas and be done with it,” says Brody. It takes years to reforest and connect these areas. But China, ever thirsty for rapid progress and enormous profits, lacks the commitment and will to do this. No one makes even a penny on a panda that lives in the wild.

While the Chinese authorities proudly announce their success to the world, the experts silently have their doubts.

In the wild, the animals lead such withdrawn lives in isolated mountain regions that the rangers, who count the pandas every ten years, haven’t actually ever seen an animal. Instead, they record the pandas’ feeding and bite marks on bamboo shrubs and collect panda droppings for DNA analysis. According to the 2014 panda census, there are still 1,864 wild pandas in three different provinces in China (Sichuan, Shaanxi and Gansu). This represents an increase of 16.8 percent or 268 animals in 10 years. While the Chinese authorities proudly announce their success to the world, the experts silently have their doubts. The quality of panda habitat has hardly improved and releasing them into the wild has not been successful. Instead, the increase in pandas seems to be based more on a more professionally conducted census and less on a real increase in wild pandas. 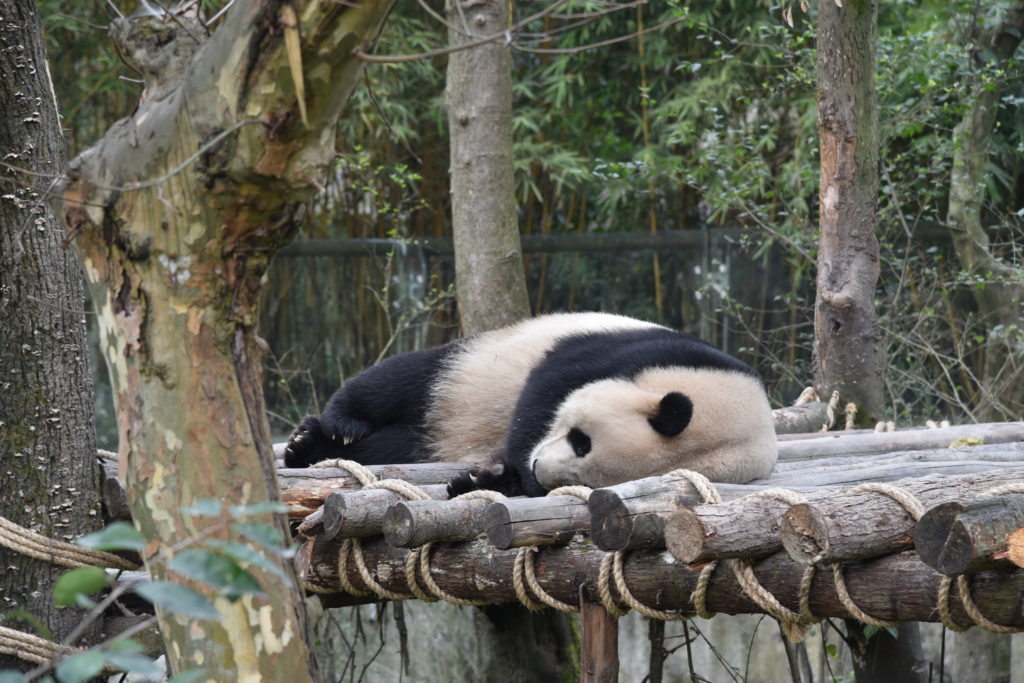 How many wild pandas are really living out there? A panda in a research center. (Photo: Wüthrich)

The latest panda figures are of little interest to the locals. The inhabitants, who live near the new panda center, are focused on their own survival. On May 12, 2008, a massive earthquake hit the region. More than 87,000 people died, and 4.8 million people lost their livelihood. The survivors were moved from mountain villages to new concrete buildings in the valley. While the older people sneak up to the mountain pastures to cultivate the abandoned fields, the younger generation waits for work. The concrete tenements stick to the deserted street like ulcers. The new panda center – the old center was destroyed by the earthquake – is supposed to revive the area. The residents have high expectations. “More guests, more income and a future,” is what the owner of a small roadside snack bar says, summing things up. “The pandas are our life insurance. Unlike the people here, you do not forget these animals. They are too rare, too precious and too well known to be forgotten.” 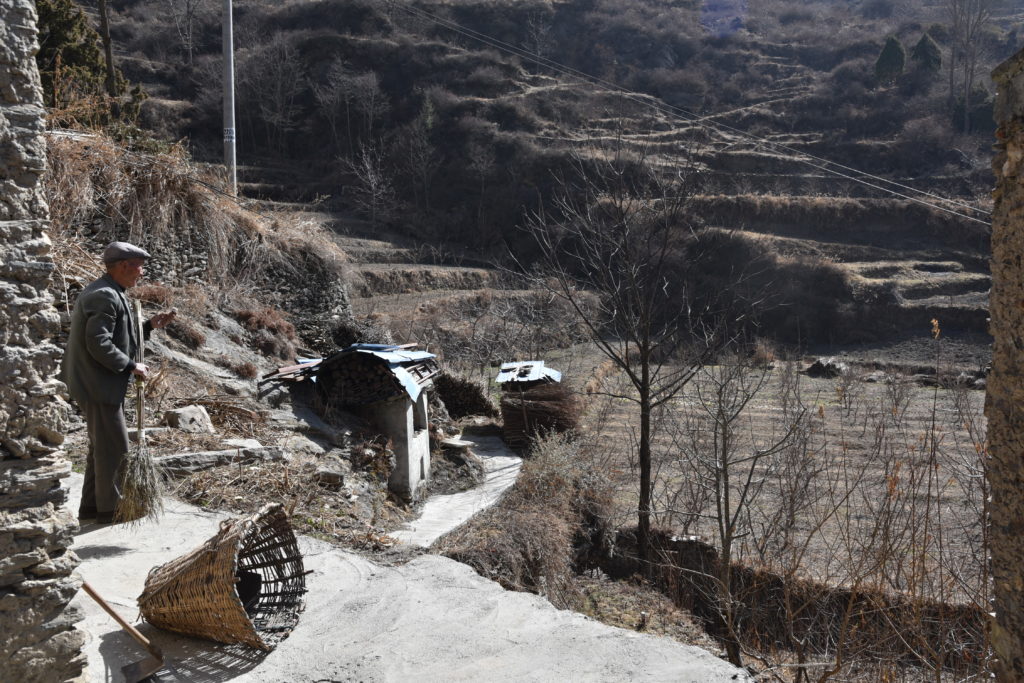 The survivors were moved from mountain villages to new concrete buildings near the new road. (Photos: Wüthrich) 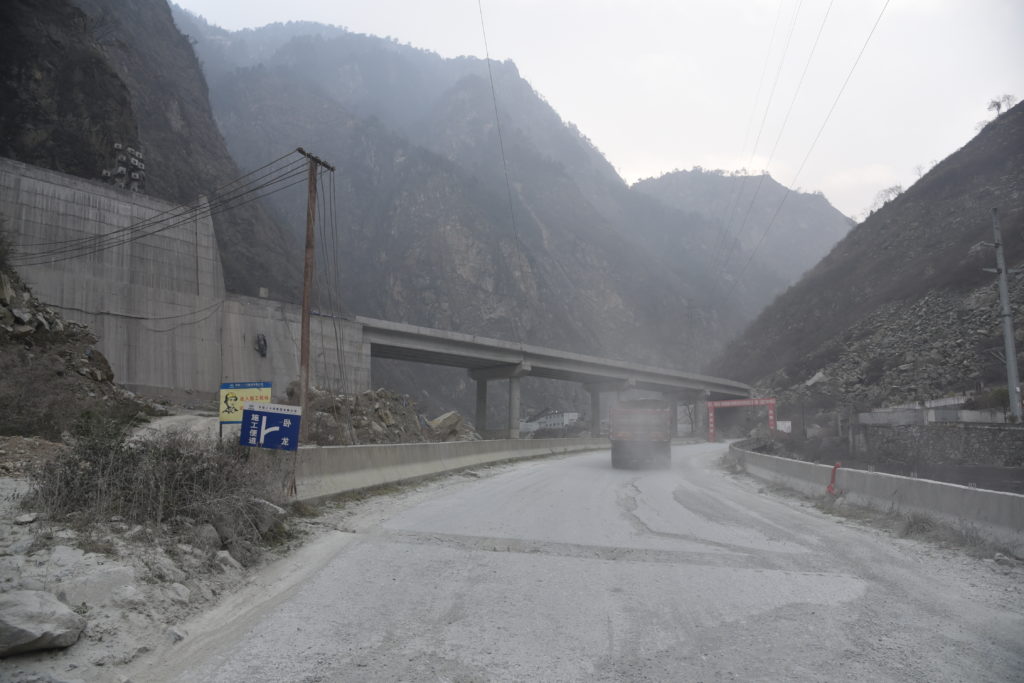 No animal is more popular and doted upon around the world than the panda. They are the stars at every zoo, a sure bet they’ll get lots of visitors and deep emotional reactions. China is aware of this and runs a lucrative panda “lending business.” A panda couple costs as much as 1 million US Dollars annually in loan fees – but only for selected partners interested in entering into an economic cooperation. In other words, it’s panda diplomacy at its finest. The loan agreement runs for ten years and can be extended for another five. The zoos are confronted with monthly costs amounting to several hundred thousand Swiss francs. The Edinburgh Zoo gets the bamboo for its pandas from Holland. If the pandas have offspring, then the babies are the property of the Chinese government and are flown back to their homeland as young animals.

According to panda breeding experts, 500 captive pandas will suffice to ensure 90 percent of the genetic diversity needed to keep them going for the next 200 years.

China stresses the fact that it uses the money for panda research and species conservation. To build a basic breeding stock for a species, it takes about 300 specimens. According to panda breeding experts, 500 captive pandas will suffice to ensure 90 percent of the genetic diversity needed to keep them going for the next 200 years. Today, about 440 pandas live in captivity worldwide with about 30 baby pandas added to this figure annually. Without any effort, China could thus certainly reduce its panda breeding programs and devote itself to expanding its protected areas and reintegrating the pandas into the wild – while thumbing its nose at big business. All in the name of the panda.

Originally published on May 29, 2016 in the newspaper, NZZ am Sonntag.