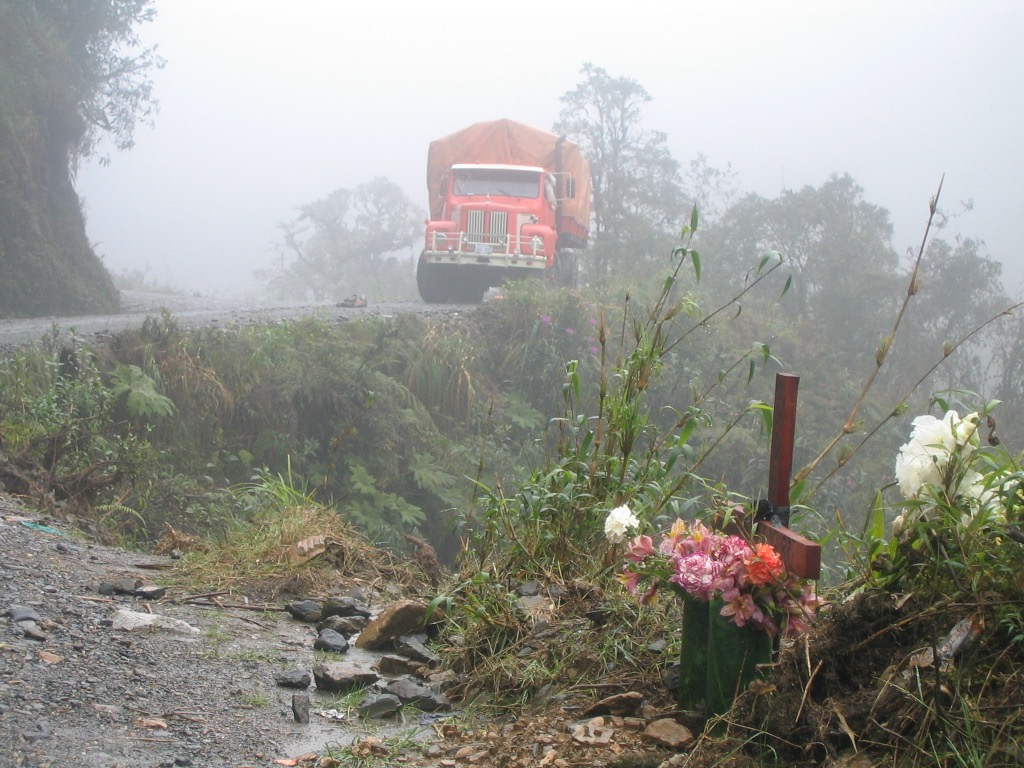 Locals called the route “La Carretera de la Muerte” – the death road. Travel guides spoke of the “world’s most dangerous road.” Rain, mud and a lane that’s too narrow turned the trip from La Paz to Coroico into an unpredictable journey. Every year, innumerable bus and car drivers used to plunge to their death from the narrow road. That was ten years ago. Now there’s a safe detour. But what was it like back in the old days? A memory.*

It’s eight o’clock on Saturday morning in Villa Fatima, a suburb of La Paz. In the midst of the screaming women at the market and slow-moving traffic, Alejandro stands on the roof of a Japanese minibus, vigorously shaking his head. “All luggage goes on the roof!” he hollers to the astonished tourist couple. He fastens the sacks, bags and backpacks with a rope. There is no space for the bags in the bus. It will already be a tight ride for the passengers. Fourteen passengers sit squeezed together on narrow benches. They all have the same goal: Coroico, a village in the Yungas (Eastern Andean slopes) with a damp tropical climate. The people in the bus have different reasons for going on the trip. The local passengers plan to visit friends or family, or buy and sell goods on the market. The tourists are interested in escaping La Paz’ cold weather or they are looking for a thrill. The drive to Coroico promises a pure adrenaline rush for four hours and all for a fare of two dollars! There’s only one road from the Bolivian capital to Yungas, which is about 90 kilometers away. “La Carretera de la Muerte” – the death road. 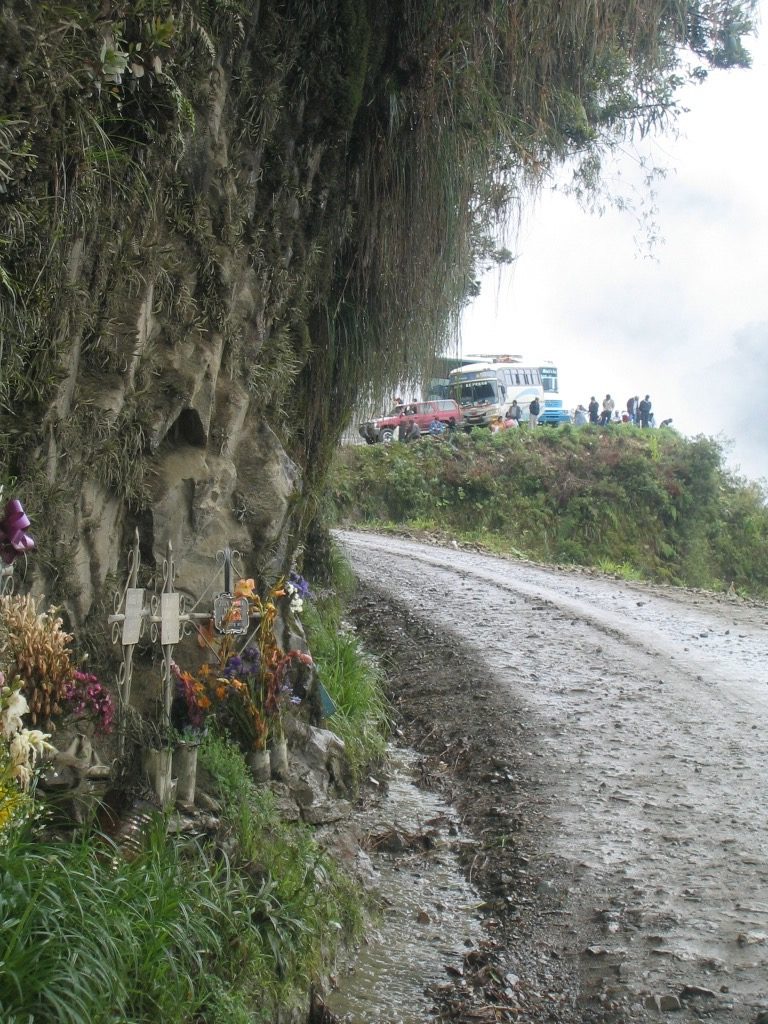 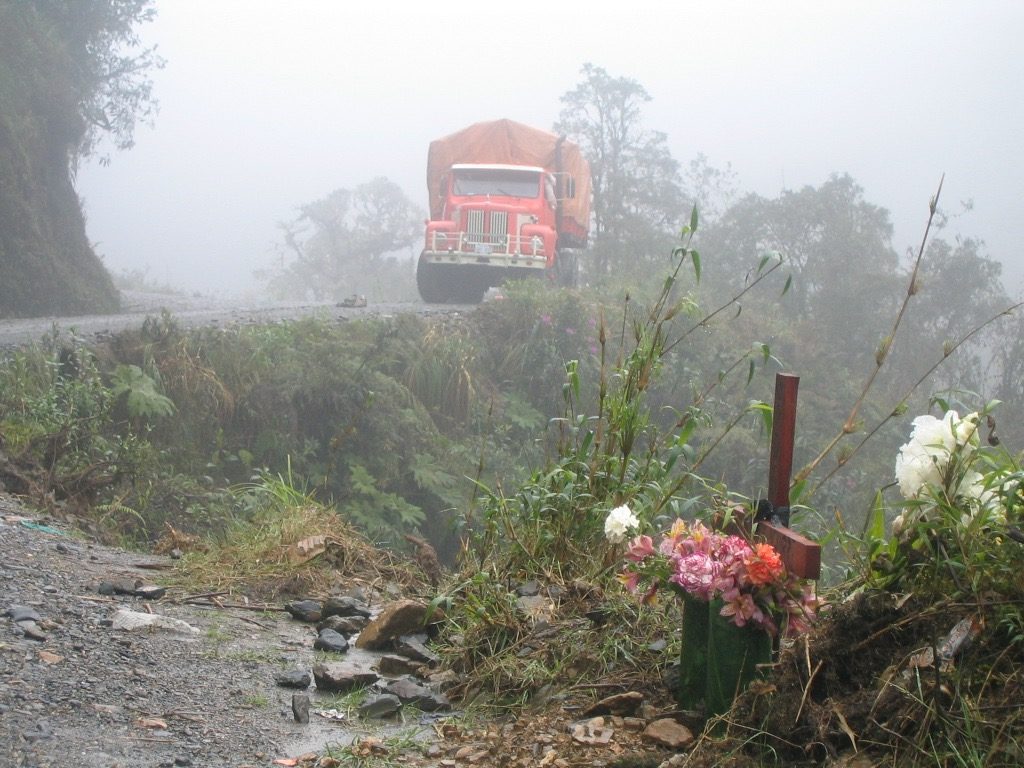 The route continues to do justice to its name even today, says Alejandro. Though there are fewer accidents now, because a checkpoint was set up on the steep approach road. Here, the brakes, windshield wipers, turn signals and clutch of the stationary (!!) vehicle are tested. The two, armed uniformed officers circle the vehicle and nod briefly. No one seems bothered by the fact that the tachometer and odometer don’t work and that the muffler “rumbles” on Alejandro’s ten-year-old Daihatsu minibus. No vehicles weighing more than twelve tons are allowed to pass – or that’s what one of the policemen insists on with a serious face. But nobody checks the weight of the trucks – not anywhere. That isn’t necessary, explains Alejandro. “The checkers have a lot of experience,” he says. “They can see if a truck will survive the trip or not. The weight is not crucial. The height and length of a vehicle is.” My confidence in a check “a la boliviana” fades. In addition to policemen, lots of vendors buzz around the bus, selling everything from fried chicken to stuffed pancakes. My neighbor buys a bottle of alcohol for a few pesos.

The windows are fogged up. You can’t see the road or the oversized figure of Christ on the summit. Alejandro crosses himself and holds his head out of the open window. The visibility is better that way.

It takes almost an hour to reach the highest point on the route, “Abru Lu Cumbre,” which is situated 4,650 meters above sea level. At this point, a mixture of rain and snow pelts the roof and luggage. The windows are fogged up. You can’t see the road or the oversized figure of Christ on the summit. Alejandro crosses himself and holds his head out of the open window. The visibility is better that way. My neighbor does the same thing and pours the whole contents of her bottle out the window. It’s a popular custom here in this country. “We pour alcohol on the ground to thank Pachamama, Mother Earth,” explains the 54-year-old Bolivian woman. “Mother Earth should keep protecting us.” So far, it has always worked. 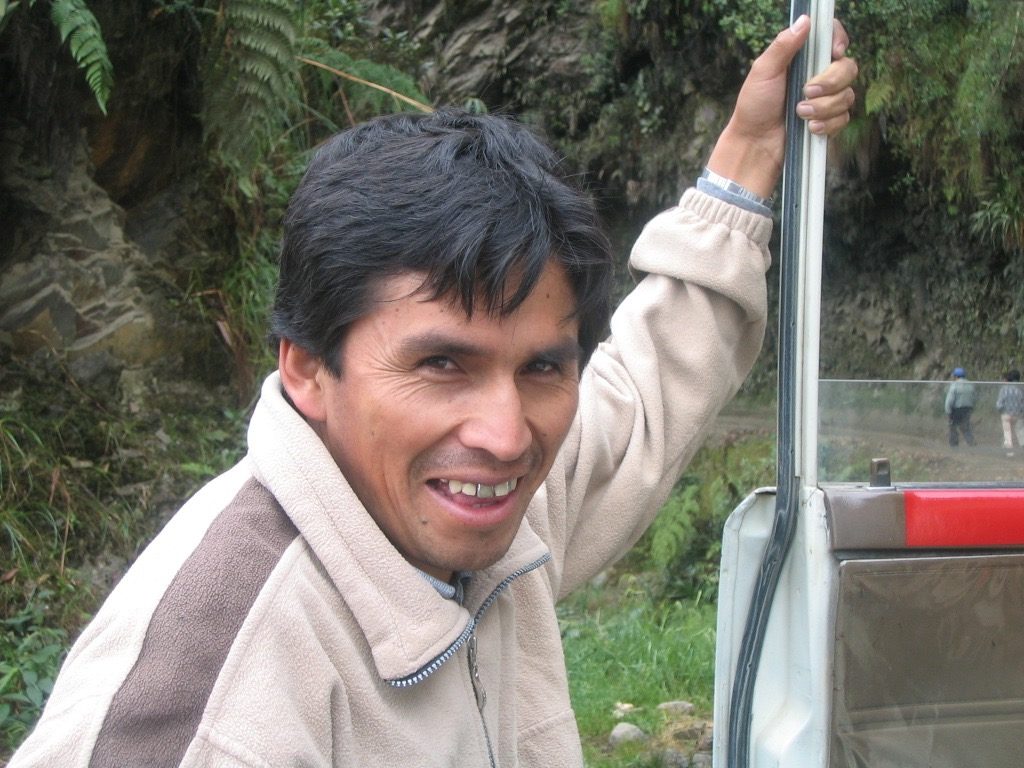 The many dogs on both sides of the road don’t seem to be bothered by the alcohol or buses. “The dogs know that the passengers usually throw some of their food out the window,” says Alejandro, squeezing the last bit of his ham sandwich together. At age 31, he is one of the younger drivers. He doesn’t believe in ghosts or saints. The older chauffeurs have a different opinion. They see the dogs as ghosts of the mountains, which need to be fed so they continue to treat you well. I throw part of my squished food out the window.

The rules are simple. The vehicles coming from La Paz don’t have the right of way and have to do the overtaking on the precipice side. There’s a lot of loud honking at every bend and everyone hopes there will be no oncoming traffic.

The road keeps getting steeper, the bends narrower. The asphalt is missing. “We have climbed 3,000 meters in just two hours,” explains Alejandro. The barren mountain landscape has disappeared. It’s damp and muggy in the car. There can be a temperature difference of over 25 degrees. The road, which resembles a broad trail, winds its way through dense forest. “Drive to the left!” is written on the sign at the edge of the road. The rules are simple. The vehicles coming from La Paz don’t have the right of way and have to do the overtaking on the precipice side. There’s a lot of loud honking at every bend and everyone hopes there will be no oncoming traffic. You wouldn’t be able to see the oncoming traffic until the last minute, so our driver. The rain and moisture have turned into a dense fog. “It’s the fog, alcohol, fatigue, excessive speed and oncoming traffic that are the most common causes of accidents,” says Alejandro casually. “It is a road that demands everything.” He carefully avoids a few potholes and puddles, slows to a crawl to pull into one of the few turnouts, fights hard for every centimeter, and finally lets an oncoming bus pass. We were lucky. The road turns into a slippery mud road in heavy rain. Last week, a truck transporting beer plummeted into the depths from one of these turnouts. The rain caused the ground to give way. Help came way too late for the driver. We slowly roll on. 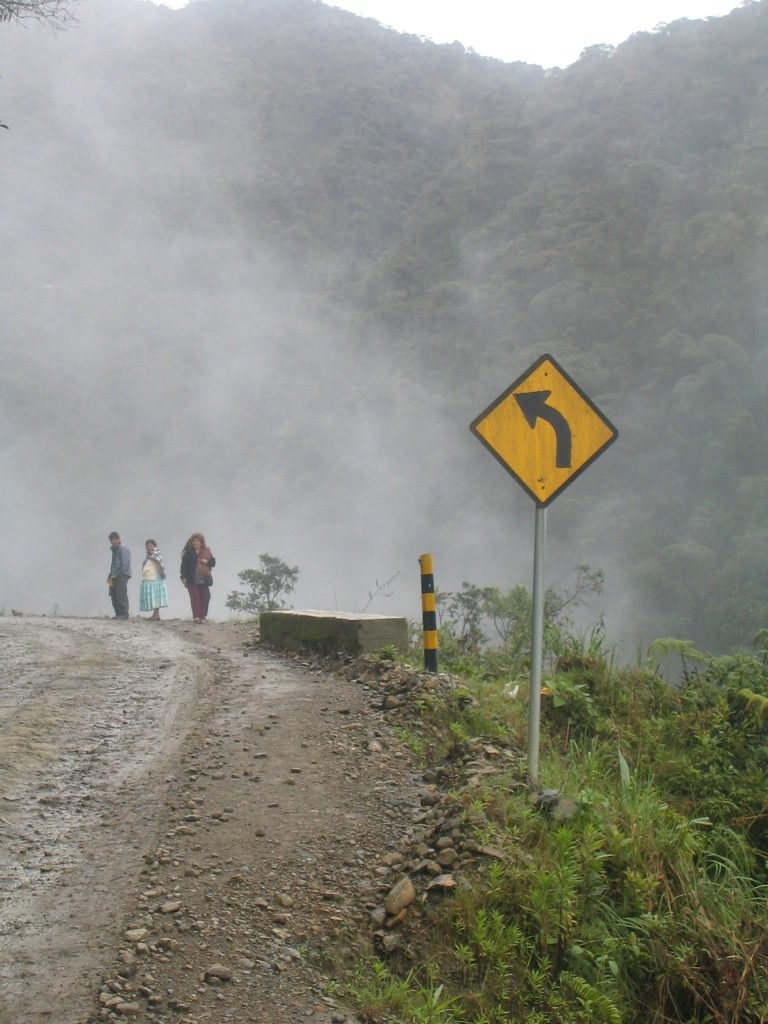 Sometimes it is safer to get out of the car and to walk! (Photos: Wüthrich) 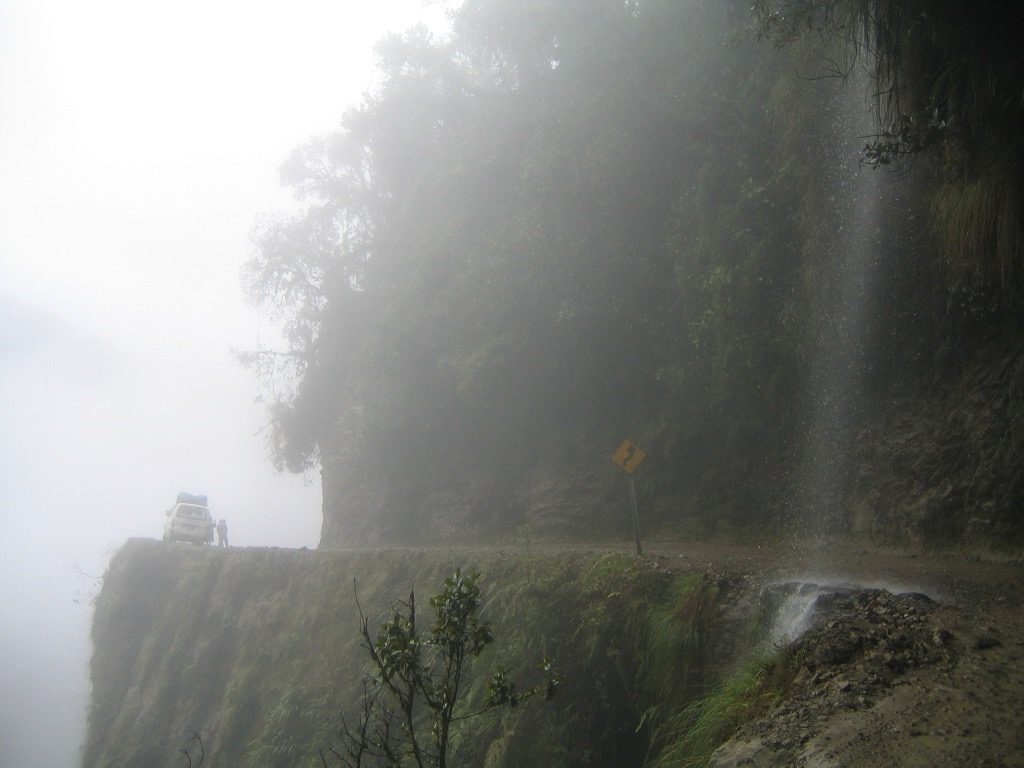 The lady on the seat next to me also gets home too late. Loaded to the brim with oranges, a truck stands at a complete standstill in the middle of the narrow road. Hundreds of cars and buses are stuck in a traffic jam. Eager onlookers flock to the broken truck in droves. With their child, dog and provisions, they walk down the narrow lane, passing countless crosses and memorials for the people who have died in fatal accidents. Curious, they peek over the precipice. Some car parts can still be seen in the depths. After about three hours of waiting, the truck seems to be repaired and cautiously starts moving again. Situations like this are a common everyday occurrence on the world’s most dangerous road. You can only wait – sometimes for a whole day, since passing or turning around are impossible. “But this will all probably change in mid-2005,” says Alejandro.

Nobody can remember exactly when the officials gave the go-ahead for the new road to be built from La Paz to Coroico. It was too long ago. Locals think it was about ten years ago, because they’d had to build a tunnel which had taken up a lot of time and cost a lot of money. The entire route should be completed and open to traffic in mid-2005. Alejandro shrugs his shoulders. He won’t believe it until he sees it with his own eyes. He will continue to work as a driver, just as his father had done all his life. But he will fight for his son so he will do better. “Maybe he’ll be a veterinarian,” he dreams aloud. The lady sitting next to me doesn’t look happy about the new road. Driving on that new road might actually be quite boring, she imagines. Maybe she’s right.

* In 2008, the author traveled from La Paz to Coroico by minibus. This report was published in 2008 in the magazine Transportschweiz. Today, the road is used for mountain bike tours.

One hell of a ride