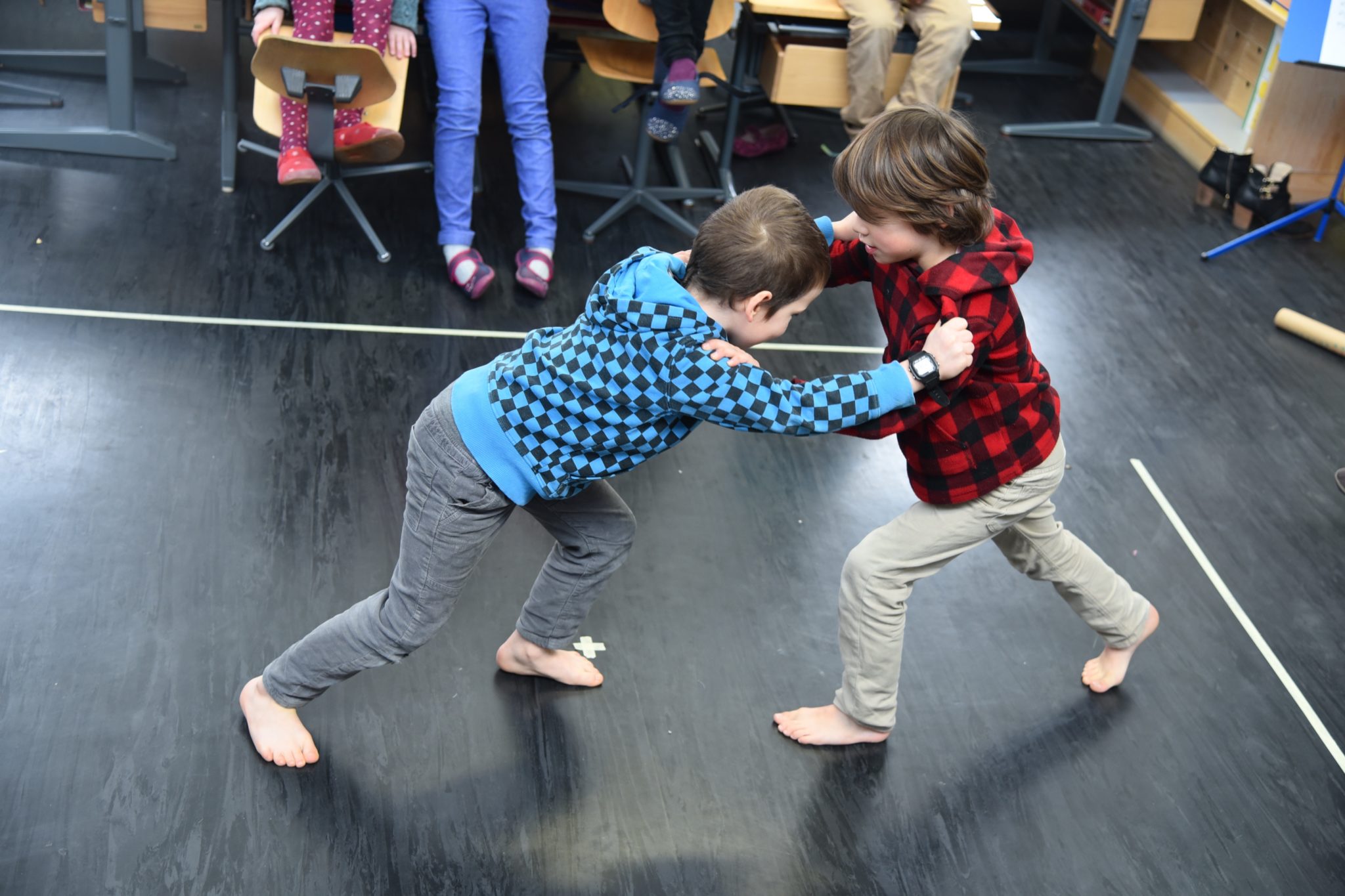 Can wrestling and fighting serve as an educational tool at school? A visit to a classroom where the students love to get into fights.

The area in front of the blackboard is empty; it’s the place next to the teacher’s lectern, where the children usually sit peacefully in a morning circle. An area is marked off on the floor with white tape. The students’ desks are pushed to the side, demarcating the area in the middle and creating a type of viewing stand. Two children slowly move into the middle, bow to each other, look each other in the eye and say: “I’m going to fight you and I respect you.” At this moment, there is total silence. Then the second graders collectively count to three and the fight begins. One child serves as a moderator and comments on the fight – fairly and objectively. The rest of the class looks on – both fascinated and excited.

Simple, clear rules
Push or pull? Use strength or cunning? Crouch down or stand up straight? Take the initiative or wait? React quickly or pause? After a few seconds, the first round is over. Using a trick, the physically smaller fighter had quickly ejected his larger opponent from the battlefield. If you lose twice, you have to leave the ring and make space for the next contender. No one is required to fight, but there’s hardly a kid who can’t wait for his or her turn to come around. Boys often even fight girls. The rules are clear and simple: You can do anything as long as it doesn’t hurt. And “stop” means “stop” – immediately. “The kids don’t fight unfairly, ignore the rules or intentionally hurt their opponent,” says Marion Wagner, a teacher who has been teaching elementary school for over 20 years. Fighting in the classroom has been part of her curriculum for ten years – alongside German, math and drawing.

The idea of integrating wrestling and grappling into the curriculum is something that Wagner stumbled upon by chance. “Years ago I had a class that had a lot of aggressive boys in it,” recalls the teacher. “Fights on and off the playground were the norm. At a parents’ evening, I addressed the problem and admitted that I was at my wits’ end.” One mother recommended a book on fighting in the classroom. Wagner was so wowed by the idea that she quickly brought wrestling and grappling into the classroom. The situation in the classroom calmed down. By having kids fight in a controlled and supervised situation, their aggressiveness was channeled into the fight and thus defused. Children, parents, but also the teacher, were thrilled. To this very day, Wagner has faithfully employed fighting as an educational tool in the classroom.

“It’s about having fun and having a good strategy”
Marion Wagner still turns to the book that was suggested to her years ago, drawing on it for advice and input: Wo rohe Kräfte sinnvoll walten. Handbuch zum Ringen, Rangeln und Raufen in Pädagogik und Therapie[1] by Wolfgang Beudels and Wolfgang Anders. It is a straightforward guide on how to use different forms of combat in the classroom. The authors describe their findings in the introduction: “We often see how children, but also adults, totally delight in sparring and fighting with each other. It satisfies various primal needs: the need for closeness, touch, holding and being held as well as the desire to hunt, capture, release, and to play with a mouse the way a cat does.” “Wrestling, scuffling and grappling” are movements that should be contact-friendly and gentle. To be sure, a fight is first of all an impersonal-objective encounter, characterized by grip tactics, techniques and strategies, physicality and strength. But Beudels and Anders point out that it isn’t right to just reduce fighting to this level. Fighting is an experience, an encounter. Proximity, respect and, above all, emotions play a key role in it: a sense of being together, opposing each other, but also of being there for each other. It is precisely this level that creates an important and decisive confrontation with the opponent – a physical and mental challenge.

“Fighting in the classroom isn’t about punching each other in the face. It’s not about conflict. It’s about having fun and having a good strategy, being smarter than your opponent.”

At a school in Zurich called Schulhaus Am Wasser, the 2nd grade children agree: “The stronger opponent rarely wins – it’s usually the smarter one that does.” Marion Wagner’s current class likes to “fight for its life,” as one schoolgirl puts it. There are many reasons for such enthusiasm. “Sometimes I’m super high energy,” says eight-year-old Lilly, describing her experiences. “By fighting, I can let out all my energy and then work calmly afterwards.” Her classmate Nick agrees and says in passing: “Fighting in the classroom isn’t about punching each other in the face. It’s not about conflict. It’s about having fun and having a good strategy, being smarter than your opponent.” Anyone who watches the children fight is impressed by their modest, matter-of-fact way of losing. No tears, no drama, usually just a hug or a pat on the back for the opponent. “When you fight in the classroom, losing means not being weak; it means you just haven’t found the right strategy yet,” says Stella, one of the students. “Next time you have to try to outsmart your opponent differently. That’s cool.”

Live out the desire for movement in a controlled manner
“Wrestling, scuffling and grappling” in the classroom is an activity that draws on various combat sports. Different movements and combat elements converge, creating a space suitable for school children to move in: instinctive, playful, enjoyable and engaging, archaic, drawing on both our human and animal natures, and at the same time, a craft to practice and a way to develop strength. So does the whole thing just boil down to being a friendly bout? Wrestling and scuffling experts Beudels and Anders say no. “In our opinion, the point of wrestling is to give children and adolescents a legal, structured framework in which they can live out their desire to move, a framework they otherwise don’t find, or rarely, or in the wrong places and under adverse conditions.”

“Many teachers think that fighting means losing valuable time in the classroom.”

It would be wrong to present fighting in the classroom as a universal recipe for success when it comes to solving disruption and conflict in the classroom. “We aren’t selling fighting as a cure for personal and societal needs,” Beudels and Anders say, clarifying their position. “It’s an interpersonal event that can succeed and make a difference, or fail.” They underscore that teachers should demonstrate a good understanding of the moves involved, but that they should also be experts in what fighting means and what sort of actions it requires – and, above all, they should have some personal fighting experience. Because if your aim is to understand and empathize with the children’s actions and reactions, then you need to have done some playful fighting yourself.” Translated into practice, does that mean “Lehrer id Hose” (“Teacher, let’s fight”)? Marion Wagner says no. She herself has no physical fighting experience. She is more into the art of Eurythmy and dance than wrestling and grappling. What counts is having a certain openness, curiosity, and the courage to try something new.

A waste of time or acquiring a skill?
But does fighting even have a place in the classroom? “Fighting is educational,” Beudels and Anders agree. “Combat sports are experiencing a boom,” they underscore. “Social authorities and government departments or ministries are supporting violence-prevention programs, and schools are increasingly open to integrating it into their curricula.” Based on her experience as a classroom teacher who hears what the others say in faculty rooms, Marion Wagner has a slightly different perspective: “Many teachers think that fighting means losing valuable time in the classroom.” The academic content is usually the only thing that counts. What dominates is the fear that you’re not teaching enough material and that your class will fall behind academically. “My experience has shown that combining movement with social skills is highly beneficial for all children,” she says. “Academic performance doesn’t suffer from this. On the contrary, it often has the following effect: Students become more stimulated and motivated, and, as a result, don’t have any trouble with the required school material.”

[1] Only available in German, the title translates to: Where raw energy makes sense. A handbook on wrestling, scuffling and grappling for educational and therapeutic purposes.

published in March 2018 in the journal “BILDUNG SCHWEIZ”