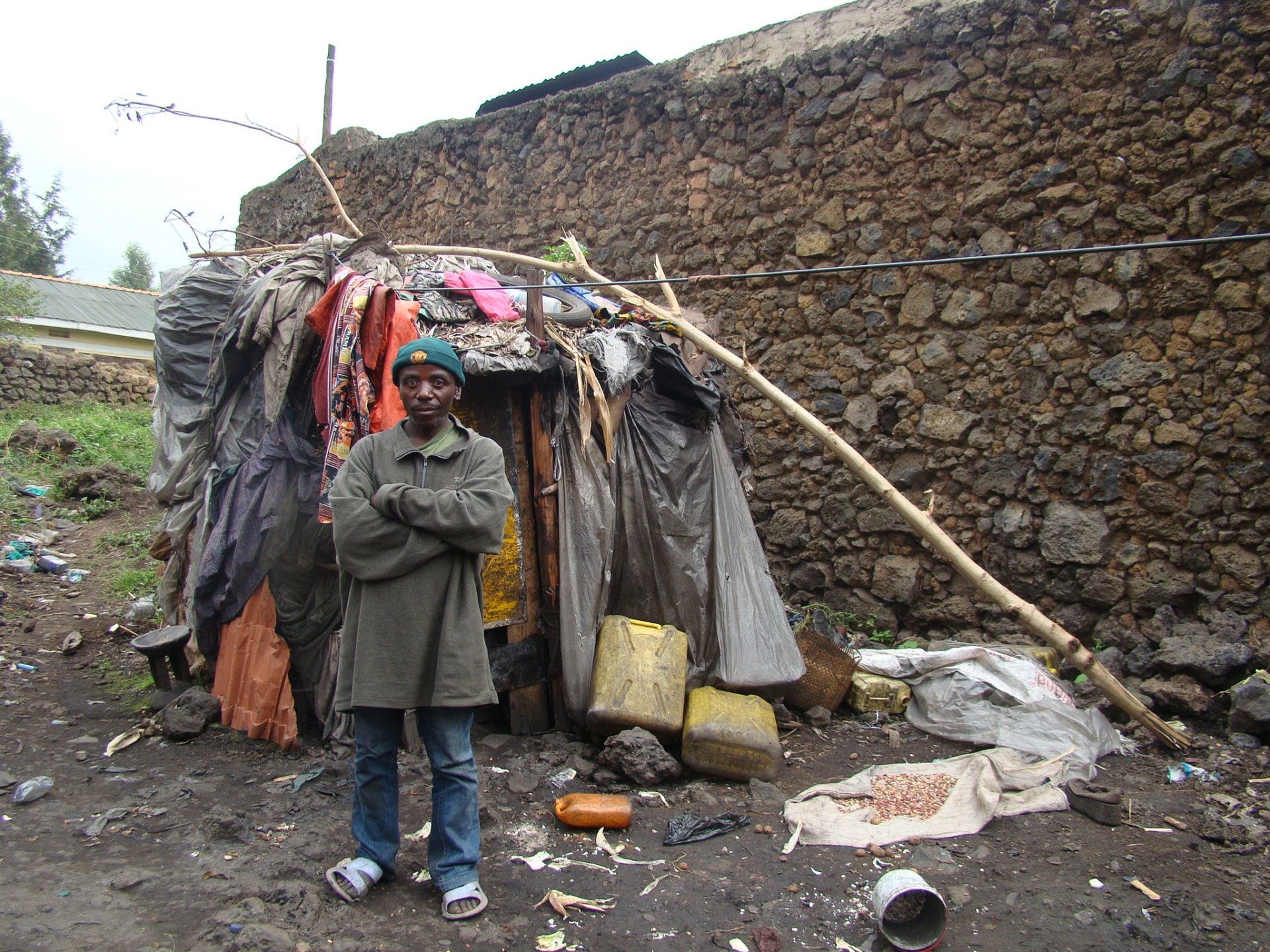 Alice Nyamihanda is only 1.50 meters tall. But the African woman is a major role model for a whole people. The 29-year-old is the first Batwa pygmy to hold a university degree.

“My family didn’t have the money for a school uniform and books,” says Alice Nyamihanda. “In the classroom, I sat alone at a table, isolated from the rest of the class. My classmates shunned me. The teacher gave me extra-bad grades. I was classified as small, dirty and stupid.”
The Ugandan woman belongs to the Batwa people, pygmies who, for centuries, have mainly lived in the forests of Burundi, Uganda, Rwanda and the Congo, making them the oldest inhabitants of Central Africa. The Batwa were hunters and gathers and found everything in the forest they needed to live. Honey, game and plants for food, herbs as medicine, bamboo and leaves with which to build their huts, sacred places for prayer and for worshipping their ancestors. They were known as gifted dancers and potters, but also for their knowledge of medicinal herbs. Deforestation, the expansion of agricultural areas, the establishment of national parks, and armed conflict such as the genocide in Rwanda and the Congo War caused the Batwa to lose their livelihood.

Without land, education and work, the displaced Batwa now live on the outskirts of the park.

Today, the organization, Minority Rights Group International (MRG), lists them as endangered. Only about 80,000 Batwa live in the original settlement areas, comprising about 0.02% to 0.7% of the country’s population. The approximately 6,700 Batwa in Uganda were displaced from the forests in the early 1990s when they were converted into national parks to protect the natural environment and the mountain gorillas. Without land, education and work, the displaced Batwa now live on the outskirts of the park. “My father was a day laborer and died early,” says Alice. “My mother worked as a housekeeper for a family who housed her. She was paid in food.” 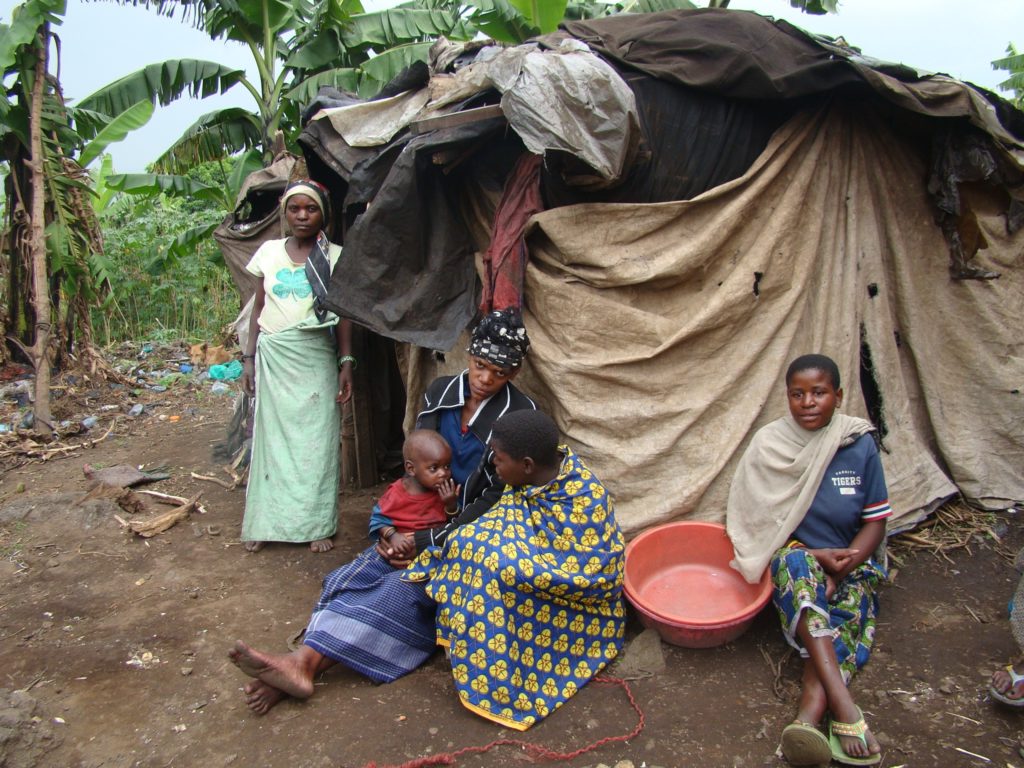 Without land, education and work: a group of displaced Batwa in front of their hut. (Photo: Wüthrich)

Thanks to international organizations, Alice successfully graduated from school and in 2010 from Bugema University in the Ugandan capital of Kampala, where she earned a degree in Development Studies. These organizations supported Alice financially, making it possible for her to be the first Batwa to obtain a university degree. After her studies, Alice started working for UOBDU, the United Organization for Batwa Development in Uganda. “The education I received gave me the courage to fight for my people and to show that we are no less intelligent or diligent,” she says, describing her experience. “I obtained a voice and my people listen to me. That’s a new situation for the Batwa people and for me. My heritage used to be a handicap. Today, I no longer let anyone make me feel bad about my size or culture.” 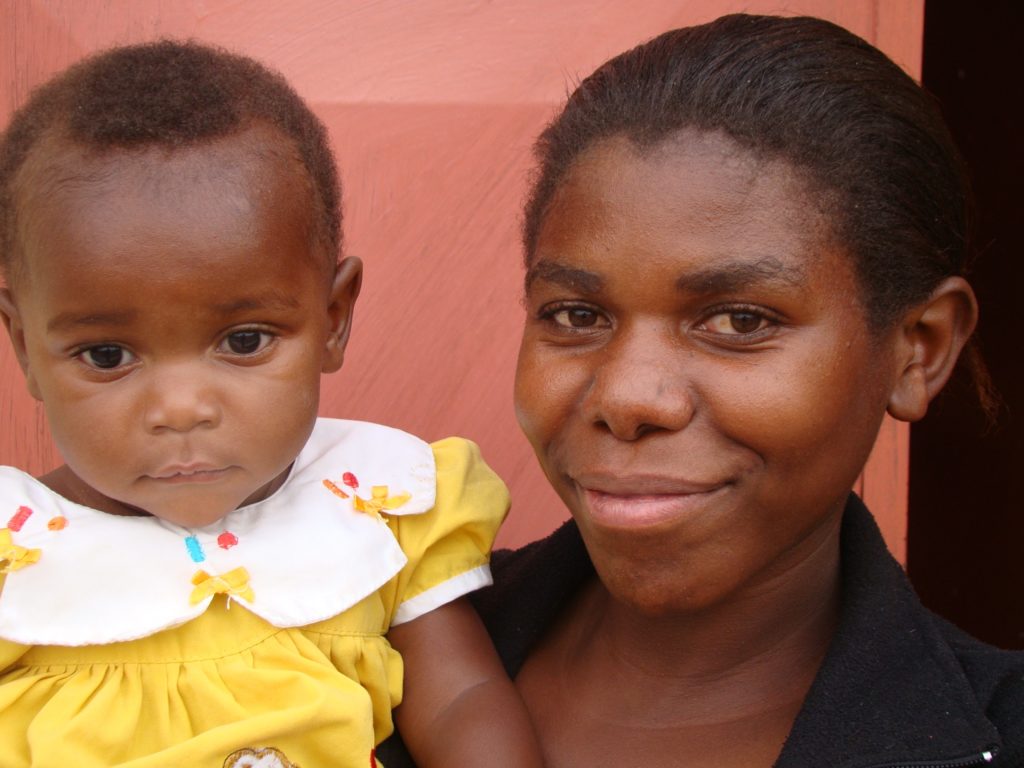 “Nobody would live here of their own volition. But it’s hard to find a place to live. Besides, who wants people who are landless and jobless on their land?”

Without any water, electricity or a roof over his head, James Kidoma lives in Mukingo, a slum-like Batwa settlement on the outskirts of the Western Ugandan city of Kisoro. “Nobody would live here of their own volition,” says the 38-year-old. “But it’s hard to find a place to live. Besides, who wants people who are landless and jobless on their land?” he asks, shrugging his shoulders as he seemingly disappears into his clothes that are much too big. After relocating them many times, the Anglican Church now tolerates 30 families on its property – and won’t tolerate a single family more. The settlement is a mixture of garbage dump and cemetery. There isn’t any space to grow grains or vegetables. Built of garbage, the huts are fixed to the sloping hillside. During the rainy season, they sink into the soft earth. Right in the middle, between excrement, garbage and kids playing in the mud, the Batwa bury their dead – secretly, at night in the dark, for fear of otherwise being displaced again. 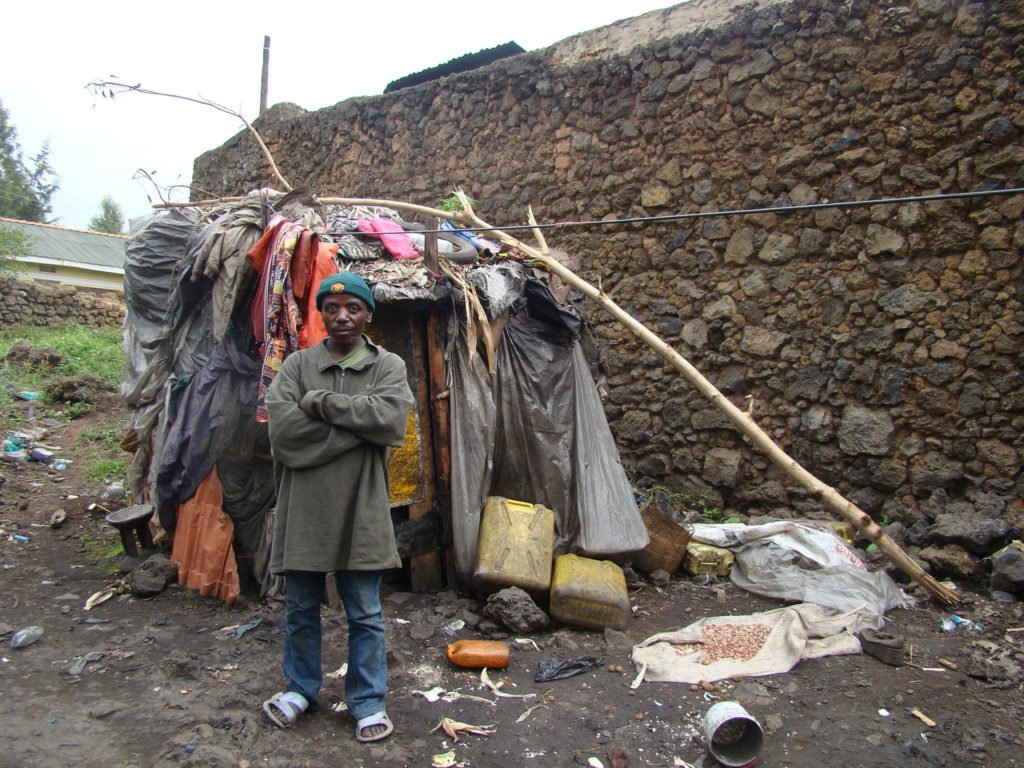 An international organization built a toilet. Otherwise, there aren’t any sanitary facilities. “The only time I have food or soap is if I find work somewhere,” says James, describing his situation. “Both are rare.” His dirty clothes speak for themselves and he’s very hungry. The Batwa aren’t prepared for the new living conditions they face outside of the forest. They die from diseases like malaria and HIV. Prostitution, alcohol, drugs and violence are a problem.

In the Congo, it’s still a widespread superstition that the best cure for back pain is sex with a Batwa woman.

In the Congo, it’s still a widespread superstition that the best cure for back pain is sex with a Batwa woman. In a 2009 study conducted in Uganda, all 27 surveyed Batwa women claimed to be victims of violence. About 70 percent of them had been sexually exploited. The infant mortality rate is also shockingly high. Two out of five Batwa children die before they reach age 5. “In the past, we rarely got sick, thanks to the herbs and our diet,” says James, disillusioned. “Today, we are only allowed to enter the forest with official permission and escorted by a ranger. We lost the forest and received nothing in return – apart from our misery. The government refuses to provide us with any compensation. We long for the past, and see no future.” 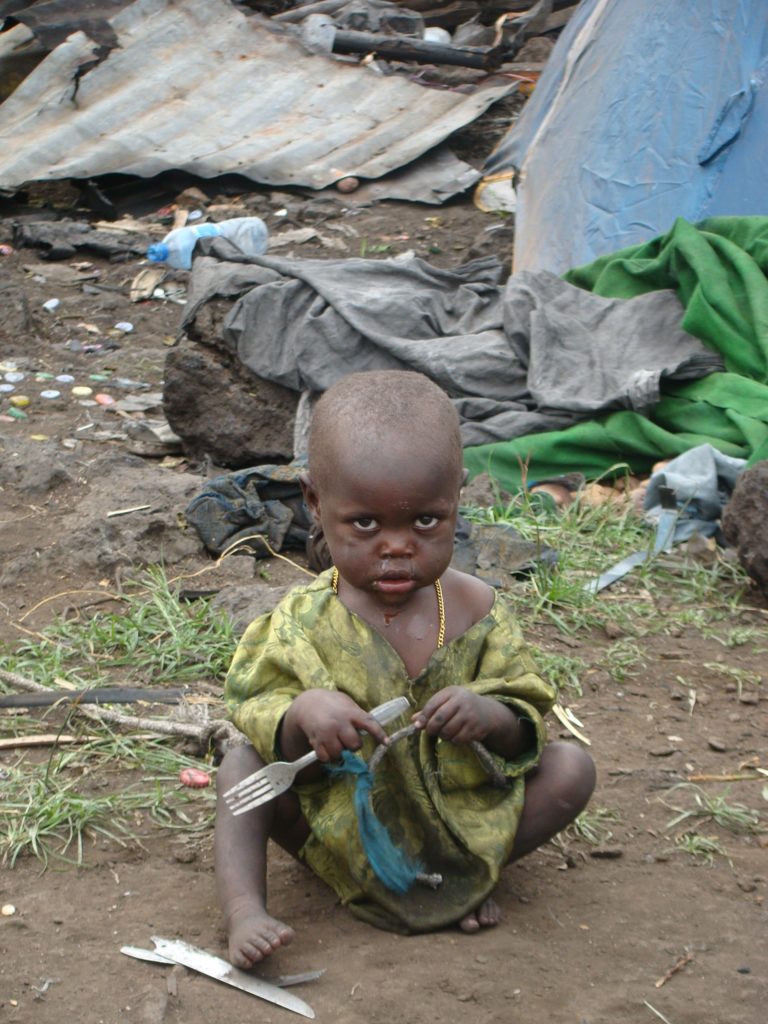 Two out of five Batwa children die before they reach age 5: a Batwa child playing with rubbish. (Photo: Wüthrich)

Returning to the forest will remain a dream for the Batwa. It’s questionable whether the new generation could even survive in the wild, because the only things they know about the forest are what they’ve heard in stories told by their parents and grandparents. Today, the majority of Batwa children attend school – so does Alice Nyamihanda. In the Batwa language, which is called Lutwa, she explains the importance of getting an education. The children listen to their role model with big eyes.

“To be autonomous and independent, they also need to own land. Without land, you remain a nobody in our culture.”

Nevertheless, after a few years, most will try to escape their everyday misery by leaving school and looking for a job. According to the Uganda Bureau of Statistics, the average monthly income in Uganda is $85, and most Batwa never earn that much. They are rarely paid in cash but mainly in food or alcohol. Alice is nevertheless confident: “Our work is slowly starting to have an effect on parents and kids. I will soon no longer be the only Batwa with a university degree.” The first Ugandan Batwa have campaigned for political office at the local level, but without success. There is a lack of lobbying and money. “But in 10 to 15 years, the Batwa will be represented in various fields of employment – as teachers, lawyers, doctors or politicians,” says Penninah Zaninka, confidently. As the coordinator for the Batwa organization UOBDU, she adds: “To be autonomous and independent, they also need to own land. Without land, you remain a nobody in our culture.”

So far, the former forest dwellers have been dependent on the goodwill of landowners who tolerate them on their land. In the village of Birara, an international organization gave some 40 families a remote, steep piece of land that can only be reached by foot. Cut off from the outside world, the radio is their only link to civilization – but only when there’s money for batteries. The rainwater is collected in a tank. There isn’t any electricity or agricultural machinery. “The people don’t know how long they will stay here,” says Penninah Zaninka, explaining the situation. “Land rights and crop management are foreign words to the Batwa. We try to make them more aware of things like this and to show them their rights.” John Bidagaza, one of the village elders in Birara, will hardly live to see himself become a landowner. “I do not dream about the land, but about the smell of the forest, the rustling of the trees and the taste of wild honey,” he says. “Even if we own a piece of land, we won’t ever be able to feel these things anymore.”

And what does university graduate Alice Nyamihanda dream about? She reflects on this for a long time, gently stroking her baby daughter’s head. “I dream that my daughter will become an attorney and that she will fight for the rights of the Batwa,” she says. Alice named her daughter “Precious” – and she should be precisely that: valuable and not just for her mother, but for all her people.