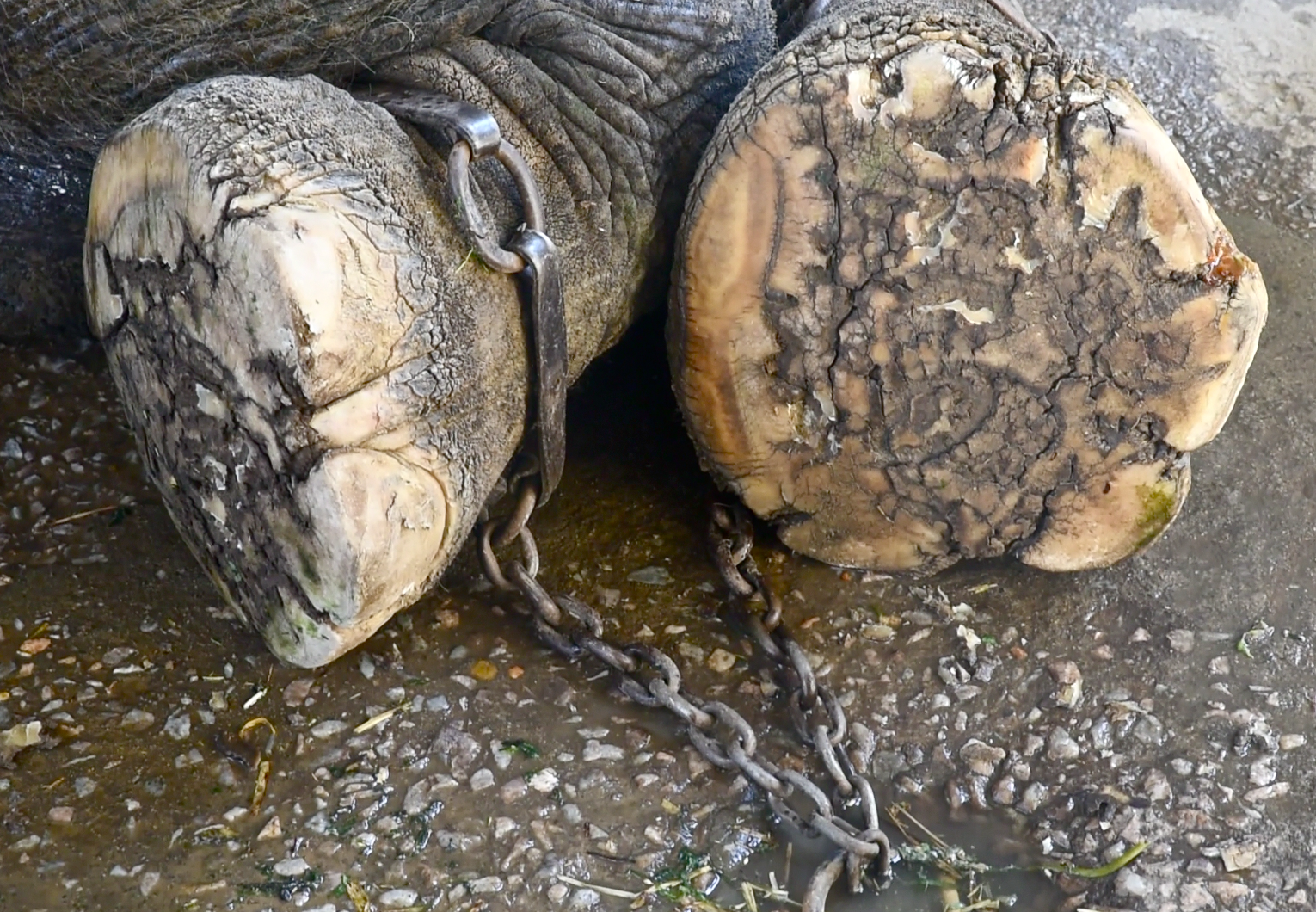 Brigitte Uttar Kornetzky uses the camera as if it were an extension of her soul; carefully, skillfully, compassionately, searching for proximity. She gets closer and closer to her subjects until she can tap into their innermost feelings and capture the moment without compromise. The images get under our skin – to the point of making us hurt. They hit us right in the soul, which is exactly what Kornetzky wants her work to do – to hit people in their conscience – and not just for the duration of the film, but forever.

In May 2014, Kornetzky lands in Jaipur, India. It’s pretty much “unplanned.” A hot, dusty city of 3 million inhabitants in the North Indian state of Rajastahn – known for its booming industry and gray, thick-skinned animals. Kornetzky is traveling alone with her camera, looking for a story. “I didn’t have a fixed plan and I hadn’t secured a budget,” she says. “All I had was a gut feeling that there was something important to tell here.” There’s no script or story when, while riding in a taxi, she spots an elephant on the horizon. She decides to change the route. The driver heads towards the huge gray animal, dropping off the filmmaker in Hathi Gaon, the elephant village. Countless elephant caretakers have been living here since 2010 – with their families and the heavy beasts in their care. The village is a tourist hub and an elephant camp. Kornetzky stops in front of a type of garage. It doesn’t house an old taxi or a broken delivery van, like you’d expect, but an elephant – chained, injured, sick. 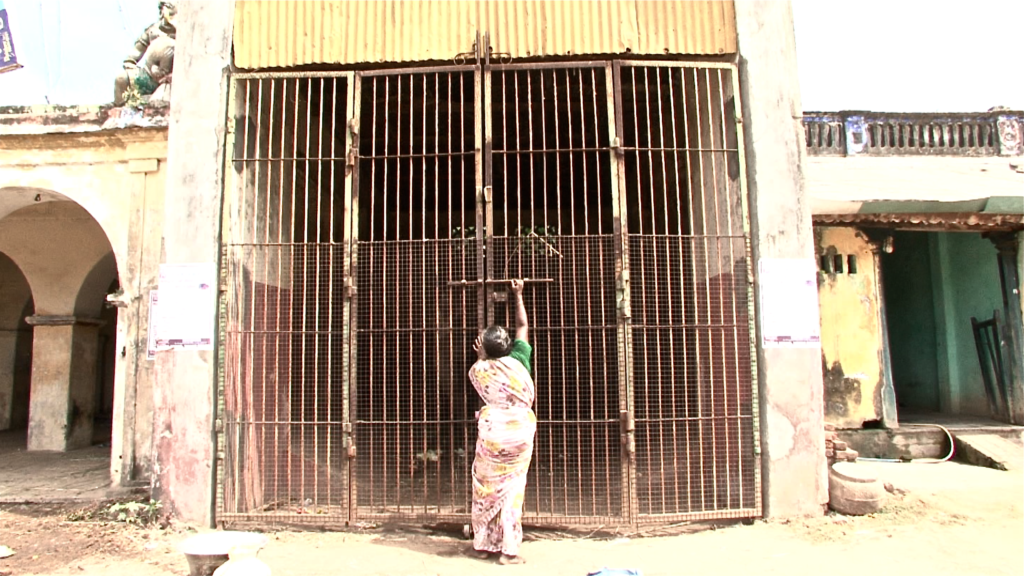 No a garage, an elephant shelter in India. (Photo: Kornetzky) 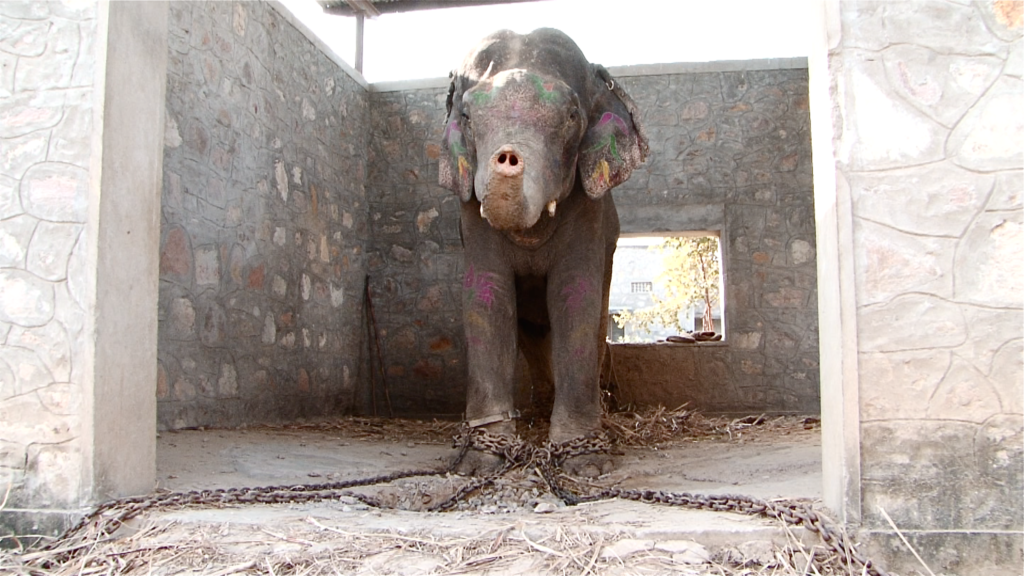 Kornetzky films this and keeps filming non-stop for the next 90 days. None of the scenes are staged; she doesn’t repeat any shots. She finds more elephants. They too are beaten and mistreated in front of the camera and, in the end, buried somewhere. Kornetzky films it all – with no holds barred, directly, and in such a painfully honest way that, as a viewer, you often wish she hadn’t looked so closely.

They burn holes in the elephants’ feet, stab them with pointed objects or just leave them lying there. The gods will make all things right again.

The animals have open wounds on their feet. Their bodies are injured everywhere from the abuse inflicted on them by the elephant caretakers. These thick-skinned creatures suffer from infections and malnutrition. The elephants’ keepers and owners lack the knowledge and the will to help the animals. They care for the animals based on ominous drawings in dusty books that are hundreds of years old. They burn holes in the animals’ feet and stab them with pointed objects. When an elephant suffers from conjunctivitis (“pink eye”), it is “traditionally” treated with salt grains and mustard oil. However, they often just leave the animals lying there. The gods will make all things right again. To put the animal to sleep is taboo. In India, elephants are regarded as deities and gods are such that they know when they want to die. Kornetzky refuses to tolerate the meaningless suffering and – despite great resistance – has the first elephant in India’s history euthanized. 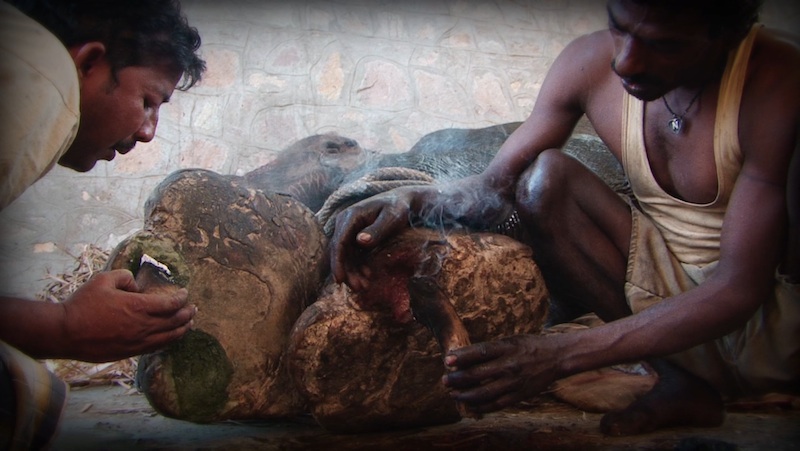 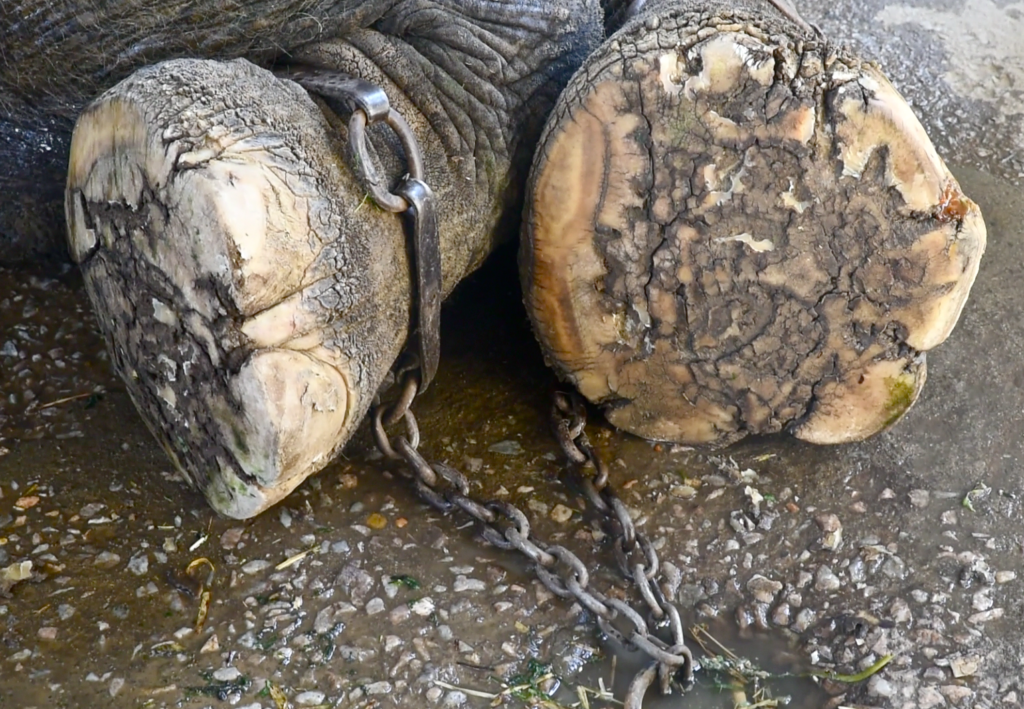 No space to roam; no medical assistance. Elephants in Hathi Gaon, the elephant village.  (Photo: Kornetzky) 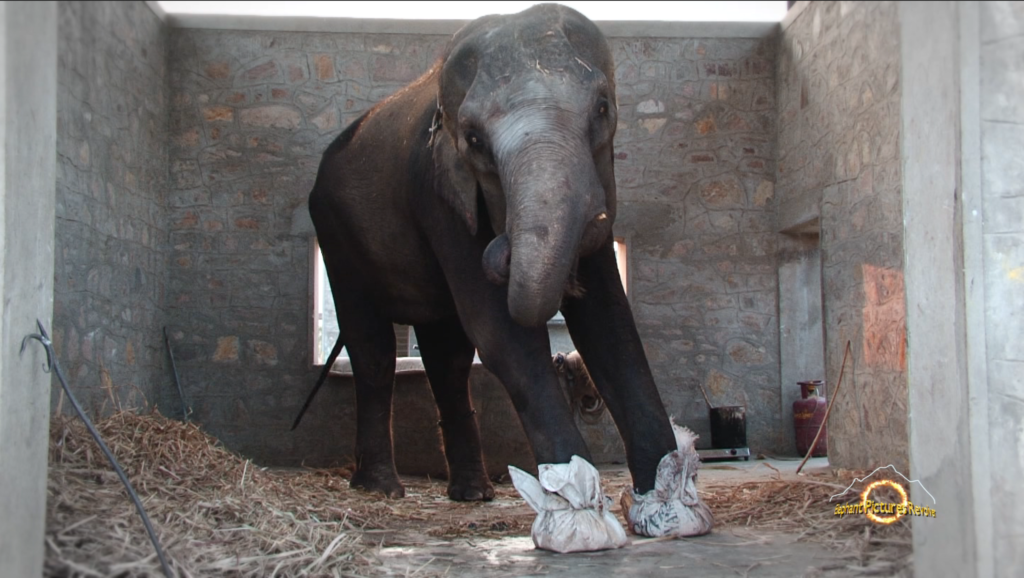 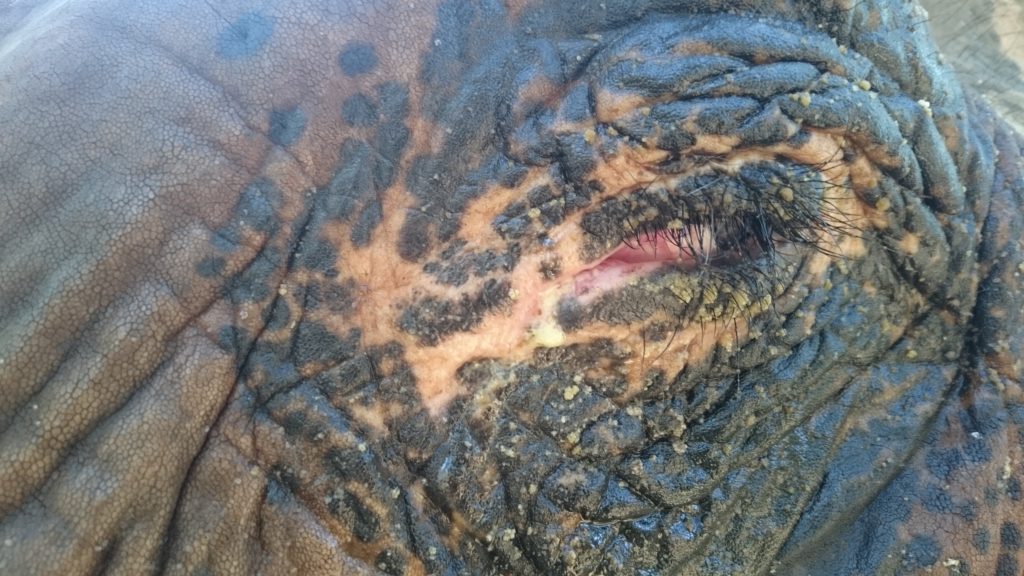 The elephants’ owners don’t really care if one of the animals dies. In the event of a death, the insurance company provides substantial compensation. That makes a dead elephant more valuable than a sick animal that’s still alive. The money helps the owner buy a new elephant. The creatures sold at the market are illegally caught in the wild – a fact that hardly interests the authorities, insurance companies, or the elephants’ owners and caretakers. With the new elephant, everything remains the same: brutal and profit-oriented – because an elephant is first of all strictly an investment. The average price of an elephant is between 30,000 and 40,000 Swiss Francs, which in India is equivalent to the average annual salary of 30 to 40 people. The huge, majestic temple elephants that are magnificently decked out in gold for religious festivals cost about three times as much – in fact, about as much as a Western luxury limousine with a chauffeur. Be it a decorated temple animal or a wood-carrying work elephant: The animals serve only one purpose – to generate profit: as a tourist attraction, at temple ceremonies or as work elephants. Caring for the thick-skinned animals or feeding them are issues that don’t get any attention. Beatings are part of the daily routine. Hygiene and exercise are alien concepts. If an animal dies, it is quickly buried near the stables. Everyone watches: the villagers, the elephants that are still alive, and Kornetzky with her camera. “It has been proven that elephants are sensitive, social creatures and that they mourn deaths,” says Kornetzky. “What on earth do scenes like this trigger in an elephant?” That the elephant carcasses might negatively affect the quality of the groundwater is simply ignored.

Kornetzky has made it her personal mission to improve the elephants’ living conditions. But the German who has made Switzerland her home is up against the impossible. She contacts politicians in India, meets decision-makers, and lobbies on all levels. After 90 days, she has to leave the country. Back in Switzerland, in 2014, she founds “Elefanten in Not” (Elephants in need), an organization that trains elephant caretakers in India. She raises funds and works on the film. Kornetzky is a Jack of all trades: sound engineer and camerawoman. Under her own direction, she cuts, translates, and creates the film’s soundtrack. Shooting without a film crew allows her to get unusually close to the animals and their tormentors. Without any outside support, however, the film project ends up taking several years. Kornetzky ultimately invests more than five years of her life in her elephant documentary. But for good reason: “Where the Elephant Sleeps” makes the leap to international film festivals and is shown in select Swiss movie theaters. In India, the film is broadcast several times on state television and screened for the public. The documentary film is also shown at schools and universities. 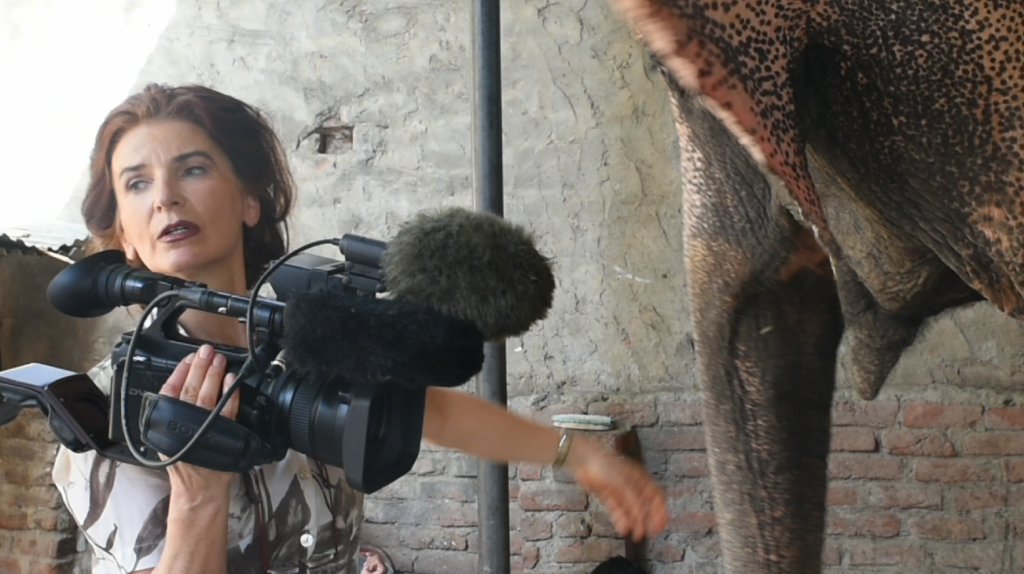 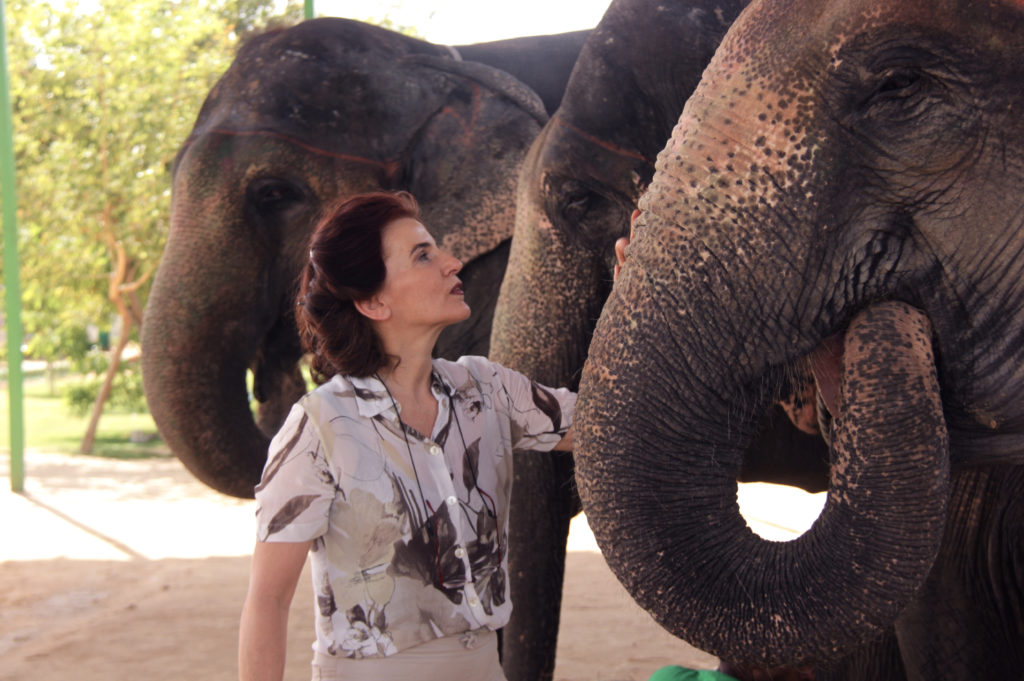 “The audience is outraged and shocked,” says Kornetzky. The Indian population joins the gray heroes in their suffering. The film becomes like its protagonists: It grows in size and gets big. People start making plans for elephant refuges and new attitudes towards elephants emerge. To this day, the only reactions that are missing are those of the persons responsible. With over 1.3 billion inhabitants, 330,000 gods, 14 million slaves and two million children dying annually of malnutrition, India’s 3,500 elephants that are wasting away and dying play second fiddle. Documentary film or not. But where is Kornetzky?
She’s back with the elephants – alone with a camera and some big plans in mind. With the help of local organizations like the Indian Wildlife Rescue and Rehabilitation Center (WRRC) and government support, Kornetzky would like to establish elephant reserves. It would be a place where old and sick animals could be cared for and kept. The caretakers would be paid a salary. Tourists would pay to observe the animals in a species-appropriate environment – and would have to forgo the elephant rides. The first favorable reactions to this idea have surfaced on a political level. The Tourism Department recently stopped running the elephant village. It is now under the control of the Forest Department in Jaipur. The focus is now supposed to be on the animals and not on the tourists. The elephants’ owners and keepers aren’t cooperating. They are scared. They fear for their position, their income, and their future. For the protagonists in Kornetzky’s film, all forms of help arrive too late. All elephants portrayed in the documentary film are already dead.