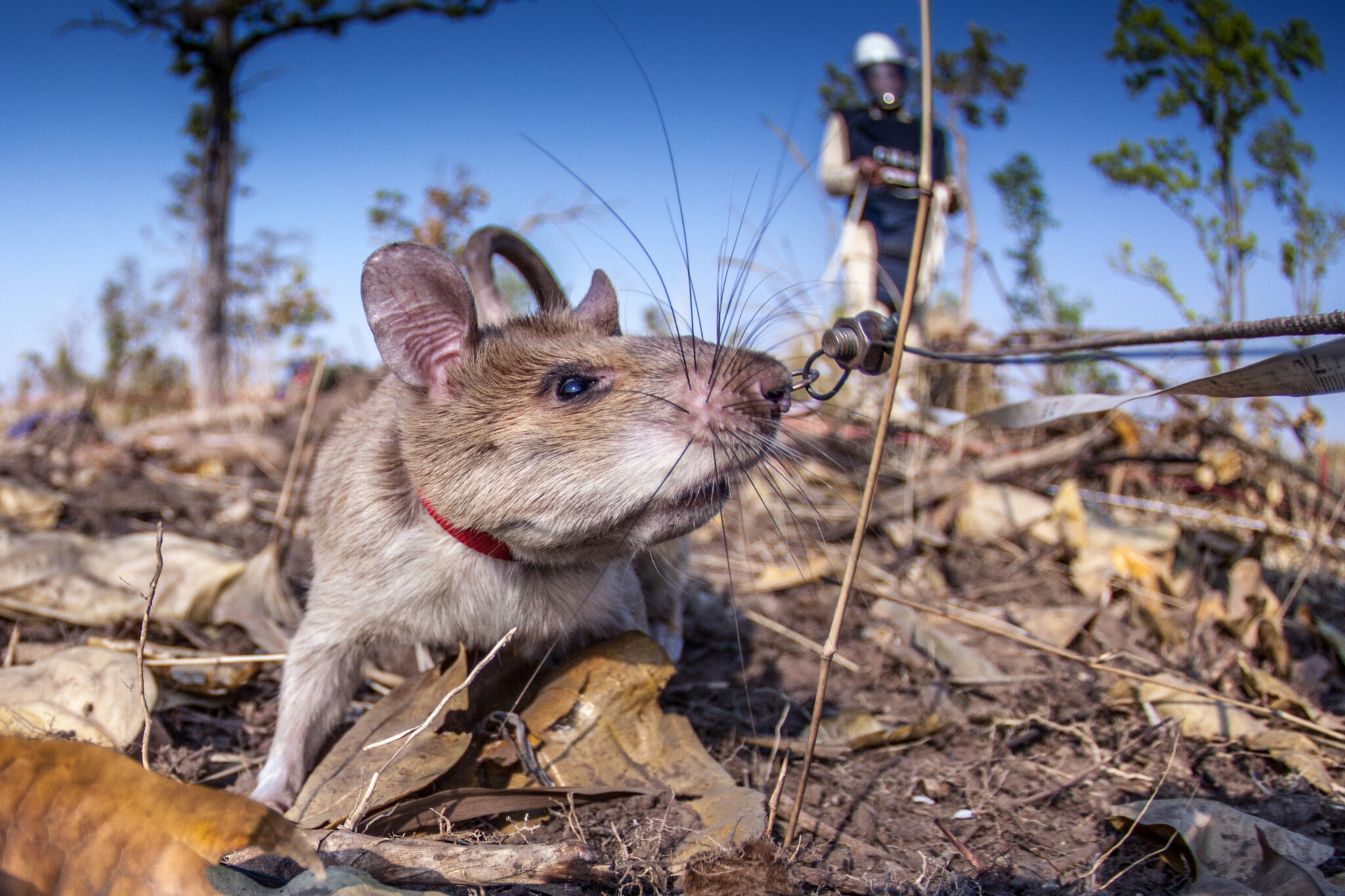 Princess Diana and Johnny Cash live like royalty in the Cambodian capital of Phnom Penh – with air conditioning, a personal doctor, and fresh fruit and vegetables daily. Anyone expecting any prima donna airs will be disappointed. The two are social, down to earth, and have the same mission: to sniff out landmines.

Princess Diana and Johnny Cash are two-year-old giant pouched rats able to use their nose to detect explosives. For the roughly 30-centimeter-long animals with their equally long tails and big ears, this is not an innate skill, but a trained one.
The rodents are regarded as extremely intelligent, have an extraordinary sense of smell, learn quickly and are easy to train. The Belgian non-governmental organization, Apopo, is dedicated to training the animals. It does the breeding and training in Tanzania before ultimately deploying them to countries affected by mines.

Cambodia is one such country. The Cambodian authorities estimate there are still four to six million landmines, cluster bombs and unexploded munitions from wartimes littering the countryside. That corresponds to one bomb, mine or grenade for every three inhabitants. These war materials were dropped or buried during conflicts that date from the 1960s to the 1990s – first by the Americans during the Vietnam War and later by the parties that fought against the Khmer Rouge.

The rodents are sensitive to sun and heat, so sunscreen is applied to the ears and tails of Diana, Johnny and their peers. “The rats always work in the morning when it’s cool and only for 15-to-20-minute intervals,” says Michael Heiman, the program manager. “The shifts are punctuated with half hour breaks in the shade.” The giant pouched rats never work for more than four hours at a time. There is no risk that they will be killed by an explosion during a mine action job, since the minimum trigger pressure for a mine is 5 kilograms. A male rat weighs at most 2.5 kilograms.

Sniffing out thousands of explosive devices
Fifty of the hero rats are currently serving on active duty in Cambodia. They are members of a team. Before the rats begin work, a special machine removes vegetation. If the rodents sniff out an explosive device, professional mine clearers take over. Since 2015, the rats have sniffed out a total of 2,663 landmines and explosive war remnants. “Running one of these operations costs 30 cents per monitored square meter, making the price competitive,” says Heiman. Depending on the size of the job, the cost is covered by the Cambodian government, international organizations, or private foundations and sponsors.

There is no risk that they will be killed by an explosion during a mine action job, since the minimum trigger pressure for a mine is 5 kilograms. A male rat weighs at most 2.5 kilograms.

The Geneva International Centre for Humanitarian Demining (GICHD) has also called attention to the benefits of these rats. “Our studies show that the rats are effective at locating explosives,” says Andrea von Siebenthal, GICHD spokeswoman. “Used alongside manual mine clearance and machines, these rodents can increase productivity during an operation.” Innovative solutions, as well as research and development, are important factors for the Geneva center: “Without ongoing R&D, we would not have metal detectors or ground radar,” says von Siebenthal. Today, technical aids aren’t the only keys to clearing mines efficiently and effectively; innovative forms of information technology and data management also play a crucial role.

No eye contact needed
One of the latest developments in mine detection is the so-called SMAR System. Developed by GICHD and Switzerland’s Digger Foundation, the first SMART sets were funded by a Zurich foundation called World Without Mines. Developed as a system for dogs to wear, a SMART System weighs about 500 grams, is equipped with a GPS, camera, Wi-Fi system and microphone. The device allows trained mine detection dogs to freely roam through a larger area, which means they are not subject to the usual radius restriction of a leash. A dog free to explore on its own can search a specific area much more quickly and efficiently.

The focus is not just on locating individual mines, but also on scoping out an area in general to see if it might be contaminated. Using the microphone, the dog’s handler can issue direct instructions to the dog from a distance of up to 100 meters away. Eye contact is not necessary. Before the dogs are deployed, machines no longer need to clear the vegetation from the area that is about to be searched. The GPS transmits the dog’s every movement to a map on the handler’s smartphone.

If the dog smells an explosive, it keeps a safe distance away. The system recognizes the animal’s change of position and marks the coordinates directly on the map. If the four-legged creatures find evidence of mines, the areas are cleared of mines manually. If the dogs don’t detect any mines, then the land is released for use.

In the ideal case scenario, trained dogs equipped with a smart system have the potential to detect mines in just one-third of the time it usually takes and at half the cost. At least, that’s what people using this method are hoping for.

One challenge remains: finding dogs that can be trained. It isn’t suitable for every animal, and training takes four to six months. “Compared to a ‘normal’ demining dog, a dog wearing a SMART set must be able to roam around without a leash and without being in direct contact with its handler, and it must be able to cover a sizeable, overgrown area,” says Apopo manager Heiman. “This is very demanding.” After another six to eight months of training and an adjustment phase with a dog handler that takes about 10 weeks, the dog must pass a number of tests before it can be deployed to a minefield. A trained dog is worth as much as 42,000 Swiss Francs.

In the ideal case scenario, trained dogs equipped with a SMART System have the potential to detect mines in just one-third of the time it usually takes and at half the cost.

Add in the fact that it takes time to demonstrate the usefulness of this method. This is exactly where the SMART System is right now. During its evaluation phase, the project is receiving support from various organizations as well as the city of Geneva, and is being tested in Cambodia. Soon, though, smart sets will also be used in Iraq, Bosnia and Herzegovina. Findings from the project’s trial phase are expected in late 2020.

Ridding the world of landmines by 2025?
Despite help from rats, dogs and innovative technology, the number of victims of mines and other explosive remnants of war has only increased in recent years. In 2018, there were 6,897 victims worldwide. That corresponds to 19 victims per day. In 2013, the global number was still at 3,457 mine victims. The higher number is due to more extensive data collection and thus greater transparency as well as to the increased use of self-made, improvised mines. These are often used by armed, non-governmental groups in conflicts in places such as Ukraine or the Middle East.

At the same time, the international community remains committed to ridding the world of landmines by 2025. One hundred and sixty-four nations have signed the Ottawa Treaty, which prohibits the production, use, storage and distribution of mines. China, Russia and the United States are not among these nations. In late January 2020, US President Donald Trump lifted the ban on landmines used by the US armed forces.

Princess Diana and Johnny Cash have their work cut out for them.