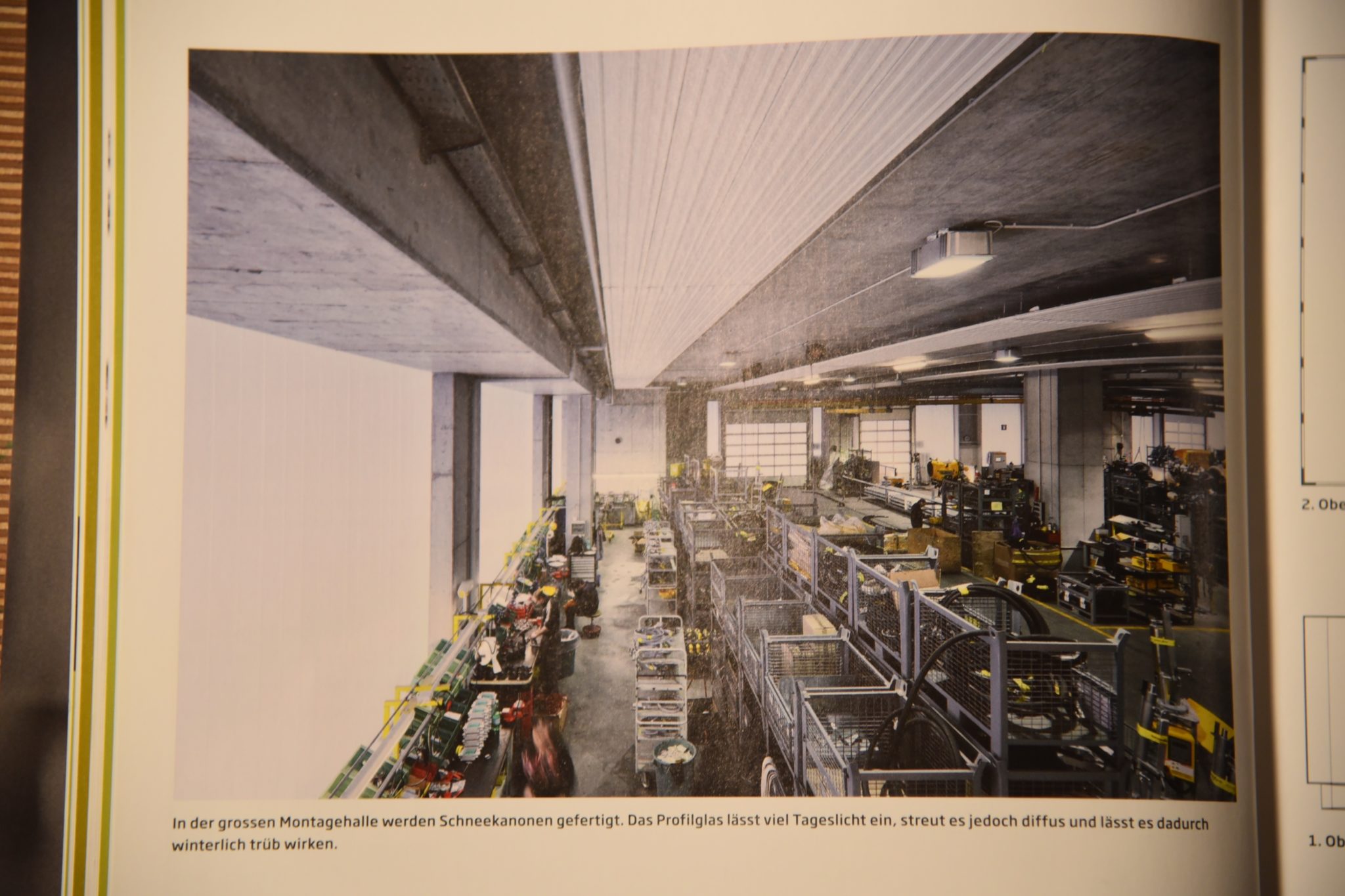 Not many commercial buildings use their exterior to try to express what is going on inside. In Bolzano, Italy, a building does exactly that. Its exterior resembles a monolith of ice and snow, and inside it manufactures snow guns.

Large, white and shimmering. At first glance, the building resembles a piece of broken-off glacier, which surprisingly came to a halt on the outskirts of Bolzano’s commercial zone, “Einstein South,” where it lies between a pine forest and a large meadow. But as you approach the skeleton frame of the reinforced concrete construction with its prominent black company logo, what looks like an eternal piece of ice turns out to be an industrial building – more precisely, a production building and warehouse complex for TechnoAlpin, the world’s largest manufacturer of snowmaking equipment. Here, snow guns and accessories are designed, manufactured, stored, and distributed. Finished in 2010, the new building was an operational necessity for TechnoAlpin, but with this in mind: The building itself should tell the world about the company and its expertise, both, in terms of its design and its expression.

A snowy feeling thanks to profiled glass
To create a practical structure that was affordable to build and that did justice to the company’s claim to present itself through its building, two architects were hired: Johannes Niederstätter (from the firm WN Architects) and Roland Baldi. “The client simply gave us a floor plan and asked us to quickly and efficiently implement the project,” explains architect Roland Baldi. The entire construction project – from awarding the contract to the architect team to the owner’s moving into the building – was carried out in 16 months. The architect duo decided to fully cover the halls in matt-white profiled glass. In other words, they selected a material that, at first sight, evokes the feeling of snow, thus putting the focus on the company’s core business. 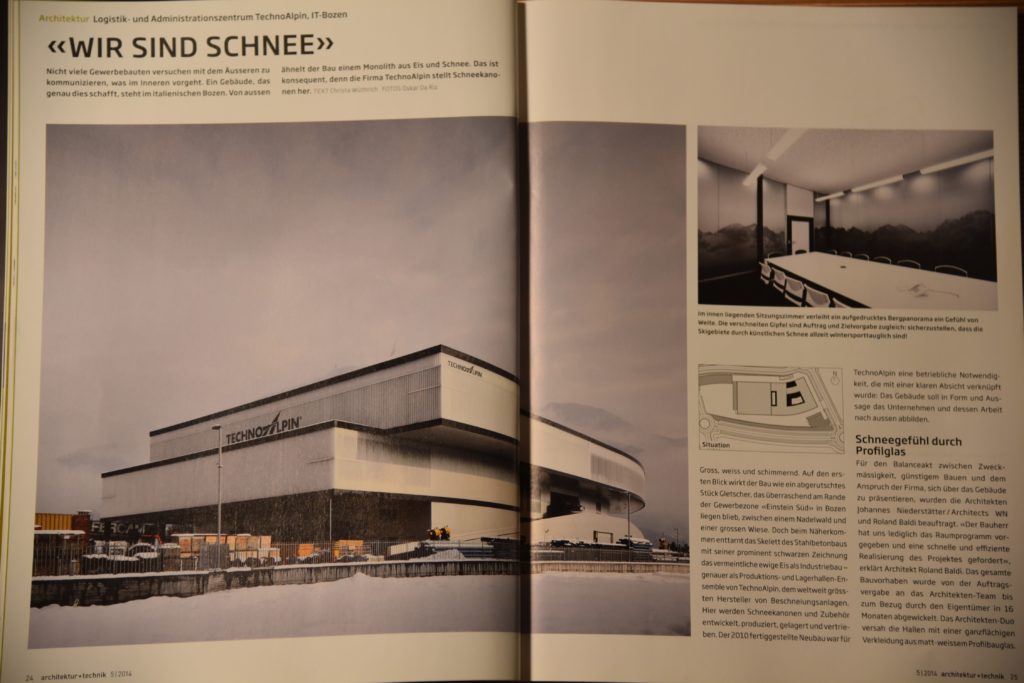 The reinforced concrete skeleton is structured in such a way that the various floor levels are clearly visible. Prominent black lines break up the white building envelope, precisely delineating where the floors are. The contrast is designed to resonate with TechnoAlpin’s black-and-white logo. “Without using a lot of iron and with core insulation, the profiled-glass façade was the ideal building material to select,” says architect Baldi. “The glass allows all the halls to be lit by natural light. However, the large openings in the skeleton frame made of reinforced concrete also let direct daylight shine into the interior rooms as it falls through the glass façade. The great white monolith can thus also be seen from the interior.” Moreover, the profiled-glass system is inexpensive, durable, and easy to maintain. In order to meet the client’s need for an affordable structure (110,000 cubic meters built at a construction cost of about €18 million), the architect did the following: reduce the number of materials used, provide a homogeneous outer skin that covers the entire building, and minimize the construction details. The result is a high-quality building with an industrial look that optimally supports the company’s operating procedures and conveys a clear message: We are snow!

An ecologically questionable product is thus produced in a minimum-energy-consumption, or Minergie, building. “Is it a wolf-in-sheep’s-clothing scenario?

A wolf in sheep’s clothing?
But making “tomorrow’s snow” so it snows on the slopes not only comes at a price for ski resorts, but also for nature. According to environmental activists, snow guns gobble up huge quantities of water and electricity, leaving a large ecological footprint. The snow-white monolith in Bolzano, on the other hand, meets South Tyrol’s “ClimateHouse Class B” thermal insulation standard. The entire roof is covered with a photovoltaic system. An ecologically questionable product is thus produced in a minimum-energy-consumption, or Minergie, building. “Is it a wolf-in-sheep’s-clothing scenario?” Erich Gummerer, CEO of TechnoAlpin, vehemently denies this. “We are aware of our responsibility to the environment and have been working on optimizing the plant’s energy footprint for over 20 years. Treating the environment with respect is a key issue for us. This approach is something we do justice to with our building.”

In the grounds’ southeast corner, the company planted a coniferous forest measuring about 640 square meters – an allusion to the Alpine landscape where the snowmaking machines are used.

TechnoAlpin’s production and warehouse facilities used to be distributed across five locations in Bolzano. Now, all departments are under one roof. The new building has 16,000 square meters of usable floor space – the amount of space taken up by nine hockey fields. The distances are shorter and communication is more direct. The ground-level assembly area is an example of this: a ramp connects it to the upper floor, thus allowing trucks to drive up directly to load the snow guns and take them away. But before this happens, the snow guns that are ready for delivery undergo on-site testing; this is done outside on a roofed test stand built specifically for testing. During the 20-minute test run, the guns feel like they are in their element. This is because in the grounds’ southeast corner, the company planted a coniferous forest measuring about 640 square meters – an allusion to the Alpine landscape where the snowmaking machines are used. 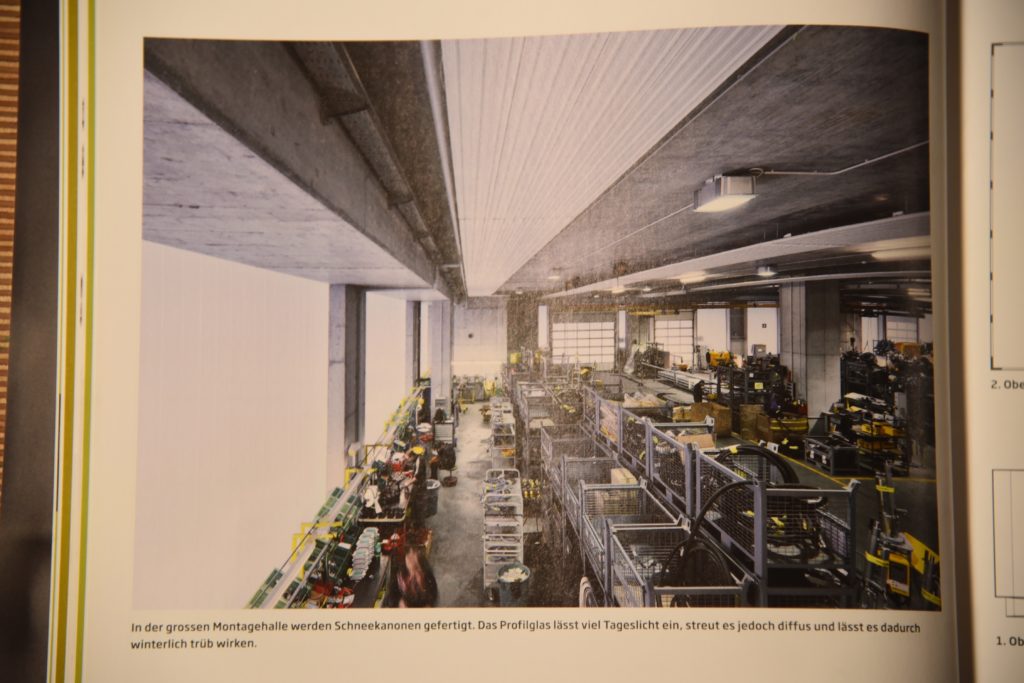 Cool inner world
The building’s cool, simple elegance is a theme that is taken up again in the building’s interior – and so consistently that upon entering the premises, you almost expect it to be a few degrees colder. Because the pure exposed concrete surfaces, the distinctive lines, and the simple design of the open interior spaces create an atmosphere that can only invoke cold air: clear and refreshing. Images and pale colors ensure that the snow is present as an aesthetic motif. The meandering office space area is equipped with a glass window that looks out at the hall and is covered with semi-transparent images of mountain scenes. The offices are separated through three inner courtyards, which are used as meeting places, relaxation spots and light shafts. At night, the building is an architectural gem. The light from inside that shines through the semitransparent façade is reduced to a shimmer, so that, when it’s dark, spectators can only guess what the inside is used for. This type of lighting is intentional and deliberate, as the two architects emphatically state: “The production halls were made to be translucent when seen from outside so as not to divulge the company’s ‘know-how.’”