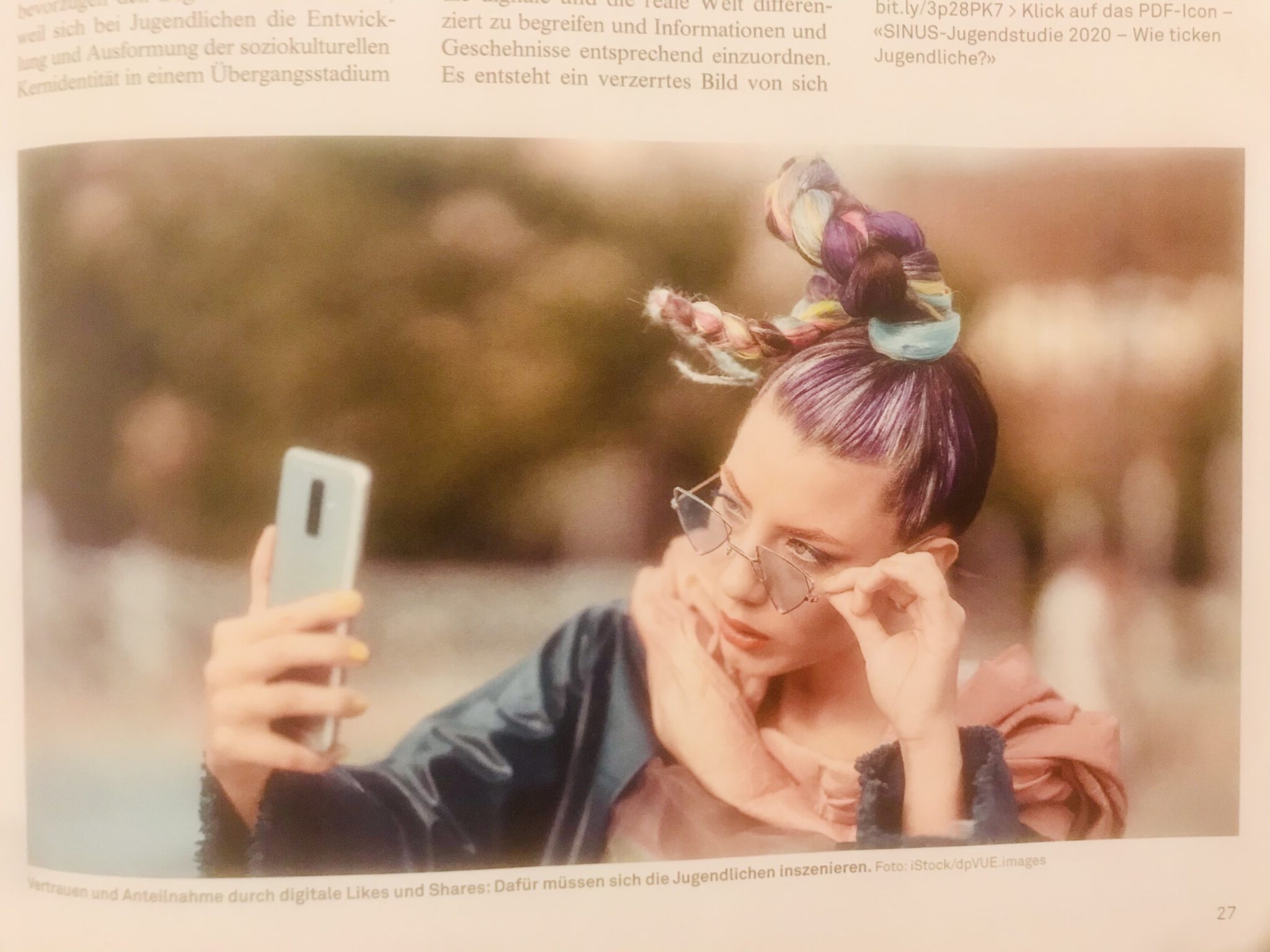 Generation Z is clueless about life before the smartphone. No generation prior to this one has been as plugged into online media as these young people born between 1997 and 2012. How does this technology influence Gen Z teens? A report based on real life experience.

I spent a week in the summer accompanying a graduating class on their last summer camp trip with their old schoolmates. There were no drugs, no tobacco, nor any alcohol. No one was getting high at all. And yet, I felt like I was lost in a fog – dazed by an ambient type of self-perception that seemed adolescent, unreal and bordering on caricature. The teens’ conversations were full of YouTube wisdom, influencer recommendations and rapper insights. Even though many of the kids had already scored an on-the-job training position, they seemed to think of it as only an annoying chore. Real life was happening online. Training to be a skilled mason? – Just background noise. Learning to become a medical practice assistant? – A duty bestowed by a stranger.

“Haters growing pale, foes exploding. I ain’t got no back, I got nuts and talent.”
I, on the other hand, mostly had my doubts.

The teens’ ideas of themselves were determined virtually and thus limitless. Or as German rapper Capital Bra succinctly put it: “Haters growing pale, foes exploding. I ain’t got no back, I got nuts and talent.” I, on the other hand, mostly had my doubts. But was I wrong? What motivated these vocational school seniors? And where does it end, that ambition of theirs that feels so unreal to me?

Rap is the future
I am visiting a vocational school in Eastern Switzerland. It doesn’t matter what town it is in, or what the names are of the students I’m meeting. Vocational schools all have the same patrons and they all pursue the same purpose – to get to the end of compulsory schooling. That’s exactly where Andres is right now: He’s got a short haircut, a sprinkling of facial hair and a lot of weight. He calls it muscles. After finishing school, he will start on-the-job training as a sheet metal worker. “When I get my first paycheck, I’ll get a warrior tattoo as a symbol of my strength,” Andres says proudly. It’s not his first tattoo. In time for his 16th birthday, he had a clef etched onto his forearm. Andres can’t read music nor can he sing or play an instrument. “Rap is my future; a record deal is my goal,” he tells anyone who wants to know, or not. At some point, there should be enough money to have a family, a house, dogs and cars; a Beamer would be best. Until then, he’ll be watching YouTube, Instagram and TikTok videos. Compared to those, school is nothing. “Can someone tell me why I need to study history in school?” he asks. “I watch YouTube and later at work I tell my own stories.”

Smartphone as part of the body
Andres was born in 2004 and belongs to Generation Z, which includes young people born between 1997 and 2012. Climate activist Greta Thunberg, American elite gymnast Simone Biles, German chess grandmaster Vincent Keymer, and US singer Billie Eilish belong to Gen Z. They are all digital natives and cannot imagine life without a smartphone. To communicate constantly and to be connected is normal. The smartphone is the logistical, social but also emotional center of control informing their lives. Or, as Klaus Hurrelmann put it in his op-ed in Die Zeit, the smartphone has become a “part of the body” for this generation. There has never been a generation that was more networked and thus had more potential to influence and spur society to action. Greta Thunberg’s “Fridays for Future” says hello!

Fun as motivator
I wouldn’t have recognized Maria. I’d seen her picture on the student photo list – a stylish young woman gazing boldly into the camera, her long hair draped over her shoulders, her face covered with makeup. But when I met her, she was this 14-year-old school kid sitting across from me who spent her time on Snapchat, TikTok, Instagram, and WhatsApp. Maria is constantly connected with Addison Rae Easterling. “Addison shares everything,” says Maria. “She is always honest, nice, confident, successful, and she looks great. I’d like to be just like her.” According to Forbes magazine, with an annual income of five million Swiss Francs and more than 54 million followers last year, Addison Rae is the highest earning TikTok star in the world.

“Limited capacity to focus, little endurance, unreliability, and a fleeting ability to engage in personal contacts, as well as difficulties when exposed to criticism – those are the key characteristics of Generation Z,”

Maria takes care of her appearance, invests time in her long, artificial fingernails. She would love to be an influencer. She can’t pin down as yet whom she would like to influence but “to be recognized by strangers on the street – that would be cool.” In real life, Maria is looking for an on-the-job training position as a junior clerk and dreams about Miami in the fall. “I saw that on Netflix,” she says. “That’s where the sun always shines.”

A noncommittal attitude and self-actualization
According to the survey “Young Germans in 2019,” teens gain trust and sympathy by way of digital likes, shares and rankings. These values are based on digital self-presentation. True to the motto: My life is a selfie! For 58 percent of “Gen Zers” fun is the key motivator for performance. The old adage “business before pleasure” is met with incomprehension. Chores suck. To be noncommittal is where it’s at and self-actualization is the measure of all things. This creates a gnarly situation for trainers and teachers. The vocational school teachers surveyed agree: Teens’ willingness to perform and take on added job responsibility have barely improved in recent years. It’s a fact that the teens’ chosen careers are not always compatible with their abilities. Margrit Stamm, an educational researcher, sums it up more clearly: “Limited capacity to focus, little endurance, unreliability, and a fleeting ability to engage in personal contacts, as well as difficulties when exposed to criticism – those are the key characteristics of Generation Z,” Stamm wrote in her article, “Generation Z: A Challenge for Vocational Trainers.”

Still, most teens do find an on-the-job training position, even if not in their dream careers. To complete the required training, however, that’s a whole new ballgame. When a hairdresser-in-training refuses to sweep up hair on the floor because it is beneath his station, or when a trainee claims she has difficulties translating directives into action in a timely manner because she is not in the mood, then he or she has little chance of successfully completing the training. According to a survey conducted by the Swiss Federal Institute for Vocational Education and Training, every fourth training contract is dissolved. In 2018, in the Canton of St. Gallen, this happened to more than 1,500 training contracts. The reason given for dissolving the contract was most frequently the trainee’s lack of performance.

Different ‘life worlds’
To generalize conclusions about an entire generation and thus millions of young people would be wrong. The “typical” teen exists as little as the “standard” senior citizen. A generation of young people is determined by a multitude of values, lifestyles and thus also inherent contradictions. The notion of “social environments” is appropriate here. Researchers for the Sinus Institute’s survey of young people prefer the term “life worlds.” Because for teens, the development and formation of a socio-cultural core identity is still in process and not yet finalized.

“To be on TV and be a ‘Bachelor’ – that would be something,” says one of my teen interviewees. These days you can even study to be a bachelor.

Sinus Youth Survey 2020 shows starkly how diverse teenagers can be. It uses words and pictures to present intimate and moving snapshots of young people’s life worlds. One page shows a photograph of a teen’s private room filled with sports’ trophies, large screen monitors or stuffed animals; the facing page shows a handwritten note about role models and visions of the future. Some of the teens portrayed resemble Andres and Maria. They, too, lack the capacity to differentiate between the digital and the real world and to properly sort information and events based on this divide. The result is a distorted image of self and others. Their self-confidence that is such a hallmark of Generation Zers, though, does not suffer from this. “To be on TV and be a ‘Bachelor’ – that would be something,” says one of my teen interviewees. These days you can even study to be a bachelor.