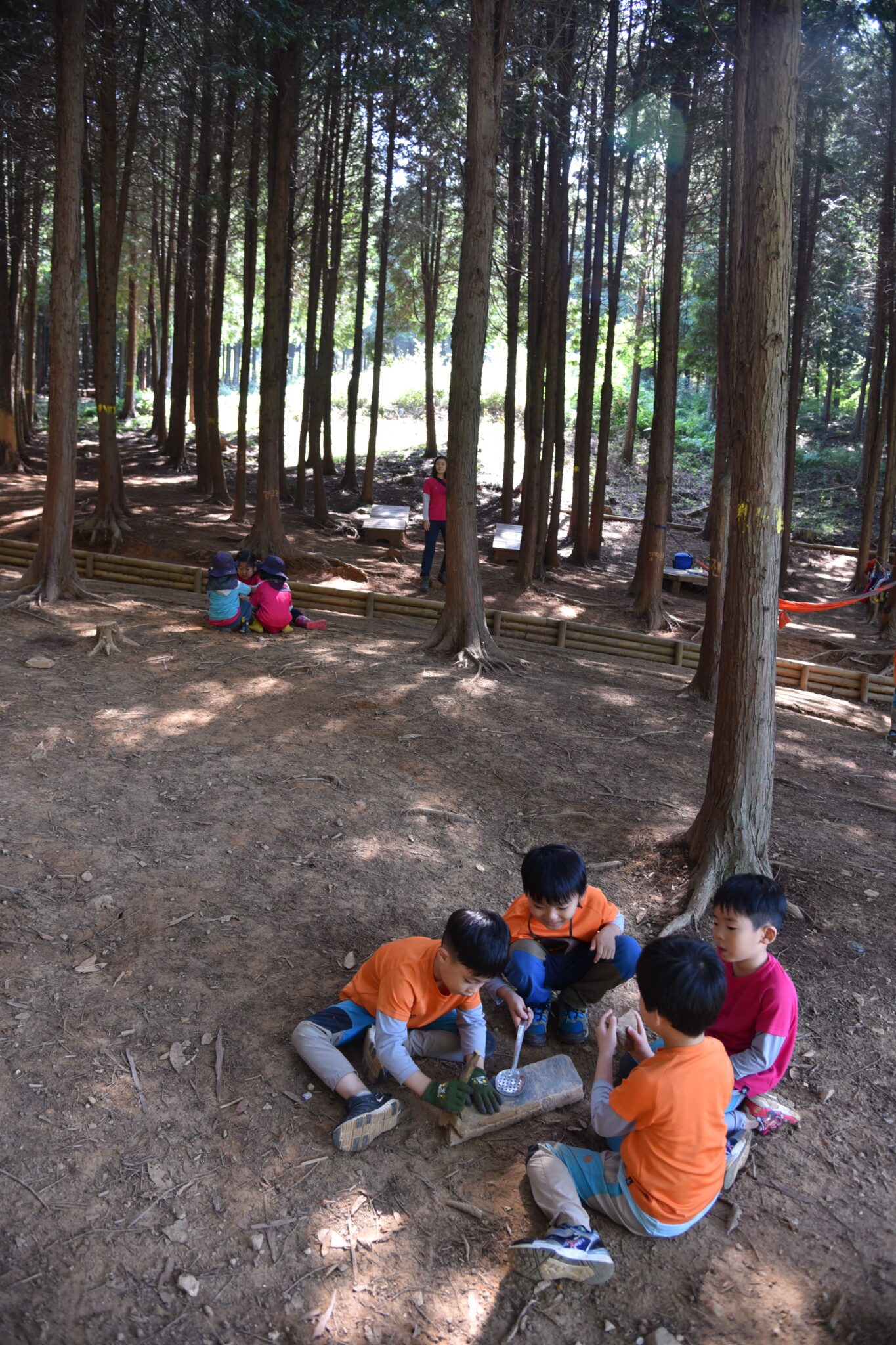 South Korea has about 2,000 forest kindergartens and play groups – all based on the Swiss model. An onsite visit.

A group of children are sitting Indian style in the midst of the forest. Shoulder to shoulder, they attentively listen to their kindergarten teacher. Using materials they had collected earlier, they are busy working together, assembling pictures on the forest floor. The result: pirate ships made of pine branches, castles made of stones, and mountains made of tree bark. Meanwhile, the kindergarten teacher is cutting a huge leaf into pieces – a leaf puzzle for the children that have requested an additional task. Next, it is time for recess and a short food break. This could be any forest kindergarten in Switzerland or Germany, but it’s actually a wooded area outside Gunsan, a port city with 280,000 inhabitants about 200 kilometers southwest of the South Korean capital of Seoul.

A person’s value is measured by their academic achievement. Seen against the backdrop of such a mindset, the mere notion of a forest school sounds like an educational rebellion.

Forest kindergartens used to be completely unknown in South Korea and are a development of the past ten years. The prevailing education system in the Asian country focuses on the children’s academic performance. What counts is a degree from a prestigious university. Nursery school and primary school children are already busy honing their skills at private learning institutes or with tutors. A person’s value is measured by their academic achievement. Seen against the backdrop of such a mindset, the mere notion of a forest school sounds like an educational rebellion. Local educationalist Hee Jung Chang is the woman behind these ideas in South Korea.

Forest pedagogy from afar, literally and figuratively
Standing between teachers, parents and children this morning in Gunsan forest, she looks content. She doesn’t look like a rebel. Tall and slim, the South Korean mother of two grown-up sons has long gray hair and dark-rimmed glasses. Speaking in a low but firm voice, she says things that could trigger an educational revolution in South Korea. As the nation’s forest kindergarten pioneer, Chang speaks out against the fact that children don’t have access to outdoor space; that they lack free time to play and move about freely in nature. Her ideas are based on Swiss and German-style “forest pedagogy,” in other words, on something that’s not only geographically far from South Korea but also worlds away from South Korea’s educational reality. Chang won’t let her skeptical countrymen deter her. So far, she has founded 2,000 forest kindergartens and play groups in South Korea. But why?

“She realized that my sons were different from the schoolchildren she knew – more curious, more open, with a more alert spirit and warmer hearts.”

“My husband and I lived and studied in Germany in the 1980s,” she says in perfect German. “Our two sons were born in Darmstadt. They spent a lot of time playing in the garden and in the nearby forest.” At the time, the educator was already fascinated by forest pedagogy. When the family of four returned to South Korea in 1994, Chang was confronted by her homeland’s very strict, performance-oriented school system (see box). She was unwilling to put her two sons through this system. “At the time, Seoul, the capital, didn’t offer any type of alternative, so we moved to the countryside, where there was an alternative school,” the mother of two explains. Friends and family were astonished by her decision and didn’t understand. “I thought you would send your children to Stanford or Harvard one day, not to a mountain or forest,” Chang says, quoting her mother’s sober opinion at the time, one that was later revised. “She realized that my sons were different from the schoolchildren she knew – more curious, more open, with a more alert spirit and warmer hearts.”

SOUTH KOREA: AN EDUCATION NATION
South Korea has always ranked at the top of PISA studies, making it a role model for many Western countries. With its 60 million inhabitants, the Asian state is known for running a tight, achievement-oriented education system. According to the OECD, about 70 percent of all 25-to-34-year-olds in South Korea have completed a higher education. Young adults are under tremendous pressure to get into established universities in South Korea. Nothing is too timely or too expensive when it comes to ensuring that one’s own children are among the best in the class. Private tutors and private learning institutes, some of which teach until 10 p.m., are the norm. Elementary schoolchildren already spend about 13 hours a day studying and cramming information. Playing and sleeping is often regarded as a waste of time. Social skills, creativity and independence are not promoted. Adolescents and young adults are under great pressure to meet their family’s performance expectations. The number of suicides has tripled since the 1980s, according to a team from the Medical Research Center at Seoul National University. In 2015, South Korea reported 13,500 suicides – that’s 37 a day.

A vibrant dialogue with the forest school in St. Gallen, Switzerland
In 2007, Hee Jung Chang teamed up with a well-known monk and founded an association called Nalmannanunsub,which means “Meet me in the woods” in German. In 2010, the first forest kindergarten opened in Seoul. There are currently 2,000 of these schools. Chang has visited various forest kindergartens around the world and studied their philosophy and pedagogical concept: “The Waldkinder Waldschule [Forest Children Forest School] in St. Gallen serves as an inspiration and model to this day.” She is in close contact with Eva Helg, the pedagogical director in St. Gallen, and travels regularly to Switzerland. Helg, in turn, visited Seoul in 2009 and 2017 to supervise training courses and workshops, to visit kindergartens, and to act as a moderator at conferences on forest education. “Between my two visits to South Korea, Korean groups visited us several times in St. Gallen,” Helg says. “They came to our kindergarten and elementary school classes.” In 2016, thirty South Korean teachers and kindergarten managers spent two and a half days taking a close look at the kindergarten and elementary school classes. The afternoon program included supplemental language training courses held outside in nature. Talks are underway on a potential collaboration to help train forest kindergarten teachers in South Korea. To stay up to date on forest education, Chang and her forest kindergarten teachers visit forest schools abroad each year. In addition to St. Gallen, Chang and her team already visited Finland. In 2019, they head to Scotland and Ireland. 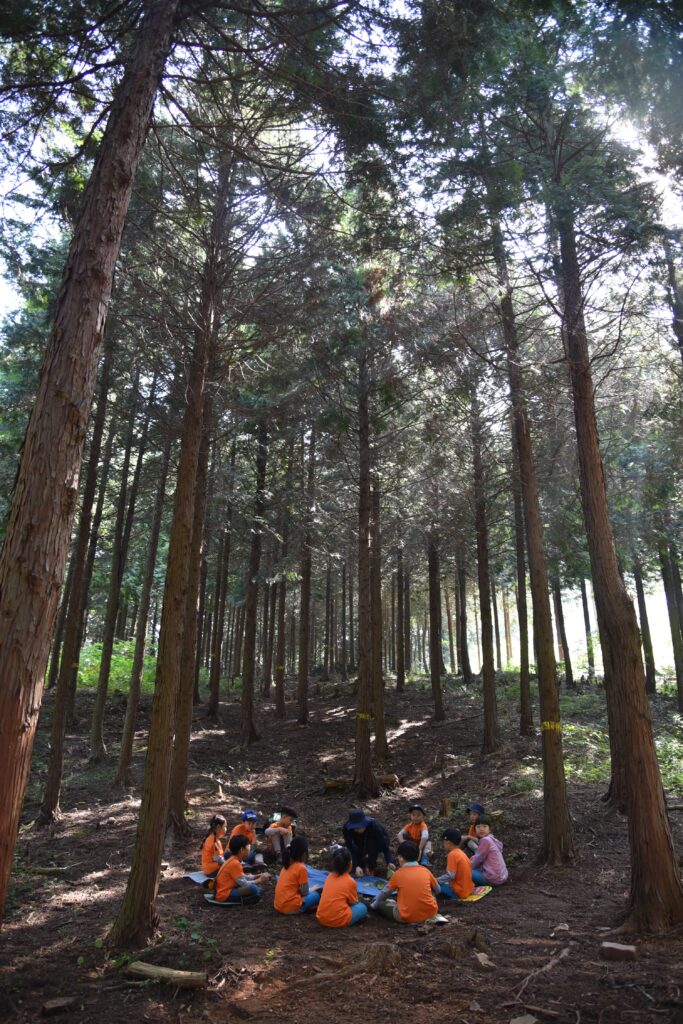 “For us, further education programs and dialogue with other forest kindergartens are very important,” says Young Sim Kwon. Since 2012, she and her husband have been running “Seum 1,” a forest kindergarten in Gunsan. Three groups, each with twelve children, spend each kindergarten day in the woods until 3 p.m., where they play, explore and learn, regardless of rain or snow. “Nature has a huge impact on the kindergarten children,” says Kwon, summing up her experiences. “They are more independent. Their social behavior improves, because they help each other more. In addition, they are calmer, more balanced and there are fewer conflicts.” The interest in forest kindergartens is only increasing in South Korea. She has also noticed that more and more parents want their children to experience some carefree hours, at least at the start of their school career.

“In the forest, being loud isn’t a problem. There is no such thing as noise. Having the space to move is helpful for Kim and contributes to his sense of inner peace.”

For first graders, who switch to the public system, the kindergarten offers an afternoon of playing in the forest. It makes switching to the performance-based system less abrupt. For some parents and children, the change will still present a big challenge – for example, for Mi Jung Lee and her son Kim. The seven-year-old has outbursts and is aggressive, a combination that by no means fits into the performance-based public education system. The forest is the ideal place for Kim. “He has space to move and to let out his energy,” says Lee, describing her experience. “In the forest, being loud isn’t a problem. There is no such thing as noise. Having the space to move is helpful for Kim and contributes to his sense of inner peace.” Going to forest kindergarten has been very helpful for her son and has helped him transition from problem case to model student. His mother and kindergarten teacher agree that he is calmer, handles conflicts differently, and even tries to settle disputes. The other parents agree and share this experience: The children are happier and more balanced. A father of two forest children puts it this way: “I see my children playing in the forest as I did when I was a child, and I feel transported back to my childhood. It is a feeling of happiness and freedom, and that is exactly what I want my children to experience.” 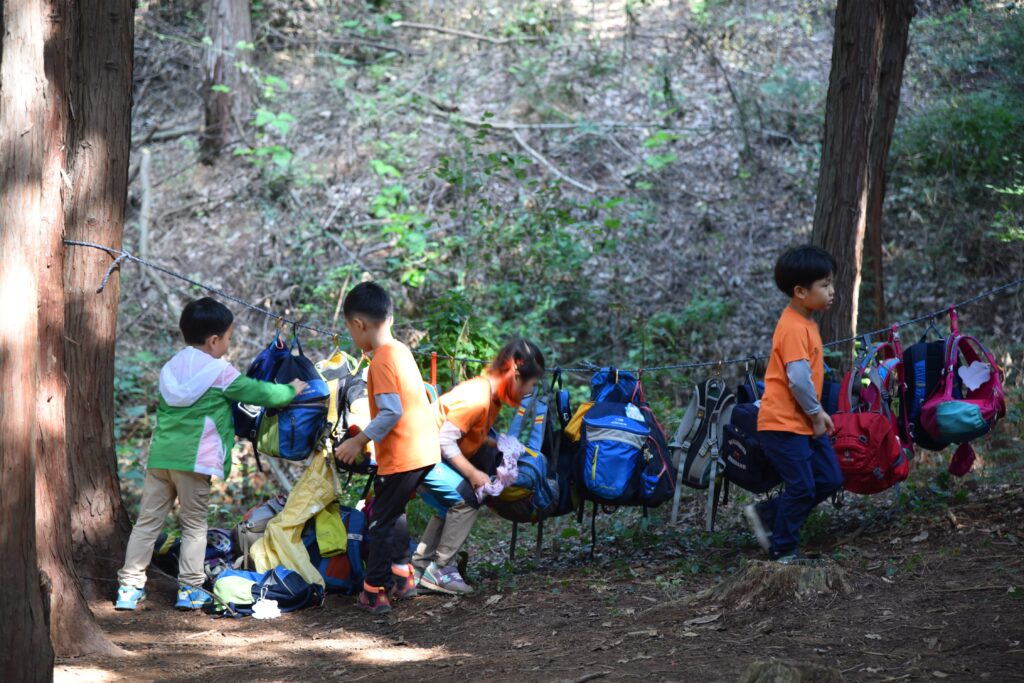 A deeply rooted skepticism
But playing in the forest, feeling free and happy also comes with a price tag. South Korean parents pay roughly the equivalent of CHF 400 monthly in tuition for a forest kindergarten. In a country that spent approximately CHF 15 billion on private tutoring in 2014, three times the OECD average, this seems affordable. Nevertheless, only a tiny fraction of South Korean parents decide to send their children to a forest kindergarten or later to an alternative school – probably out of fear that their children will no longer fit into the normal system.

“What happens if my child who attended a forest kindergarten is unable to adjust to public school classes? What if my daughter does not do well in school? And what happens when the children begin their university studies and aren’t used to pressure and drills?”

A high school teacher expresses her thoughts: “What happens if my child who attended a forest kindergarten is unable to adjust to public school classes? What if my daughter does not do well in school? And what happens when the children begin their university studies and aren’t used to pressure and drills?” Despite her own deeply rooted doubts, she helped her daughter get through the public school system. “It was exactly these factors that kept me from looking for an alternative school for my daughter,” she says. “That’s why I stuck with the usual way of doing things.” The teacher and her daughter aren’t the only ones plagued by the fear of failing academically; the majority of the population is affected by this issue. Educationalist Chang does her work to counteract this fear and to show that playing freely and learning in nature have a stimulating effect on every child. Chang’s sons, now 27 and 29 years old, study law and biomedicine.

Despite positive examples, forest pedagogy still has a long way to go in South Korea. The South Korean school landscape can only change if parents’ expectations change and if society’s academic obsession changes. But regardless of how long it takes, Chang isn’t thinking of stopping. China is very interested in the notion of ​​forest kindergartens. At the end of November 2018, Chang held a lecture in Shanghai. Enough said about the revolution.

After slow food, the slow family?